Behind the badge: A look into Burlington Police Department’s role in reform, officer training 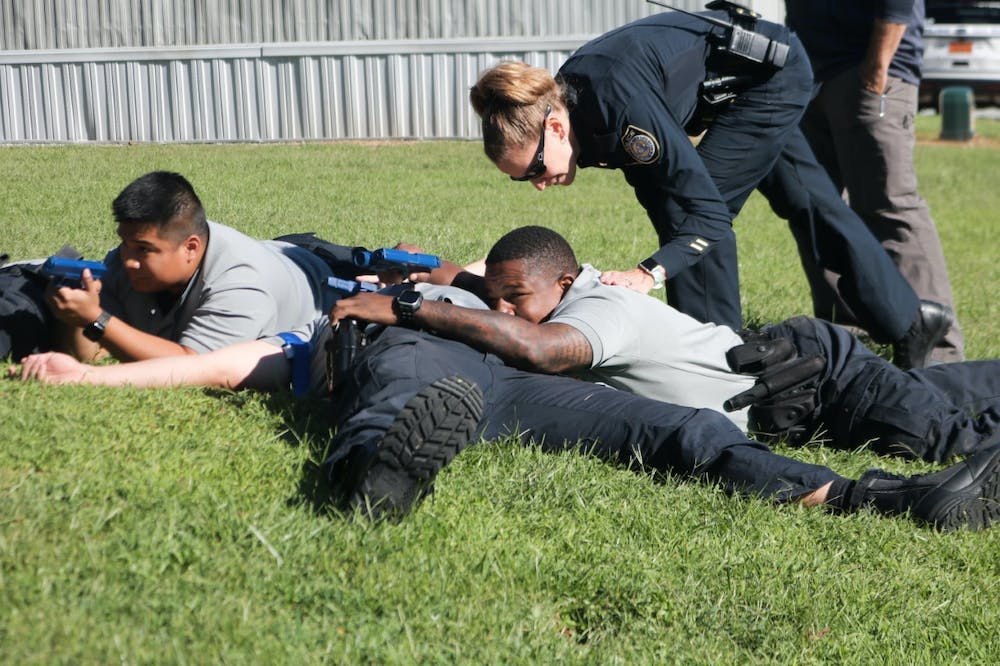 Photo by Annemarie Bonner | Elon News Network
Lt. Shelly Katkowski pats an officer in training on the back during training at Burlington Law Enforcement Training facility on Sept 23.

Lt. Shelly Katkowski puts on her police uniform, straps a gun to her waist and heads to the Burlington Police Department. But when she takes off the widely recognizable outfit each day, she keeps her occupation close to her chest.

“It’s really hard when you go to work and you work really hard and then you go out and somebody shuts the door on your face and calls you something really ugly,” Katkowski said. “You just wish that they could see you as the person that you are, but they see the uniform.”

When she’s in the city limits, she feels safe — proud of her role as a police officer. She’s married to a fellow officer, but said when she goes beyond the city limits with her husband and daughter, she worries about disclosing that she works in law enforcement.

“It’s sad that we say we work in local government and we don’t say we’re police officers because we don’t know what that person’s going to say,” Katkowski said.

After playing basketball in college at Bucknell University and serving as a women’s basketball coach locally at Elon University, Katkowski began working with the Burlington Police Department 14 years ago. Now, instead of training athletes, she trains cops in a time where she said instruction is especially important.

The department has its own training facility, located in Haw River, where officers do simulations of what they would do while patrolling the community. Every other Friday, half of the patrol team trains for 10 hours.

Some of those training scenarios include high-risk traffic stops, crisis intervention and mental health first aid. When people sign up to become a police officer, Katkowski mentors them in the academy from when they start to when they graduate.

However, she said training can only do so much for officers who are mentally exhausted in their career. She said in her experience, what the crimes officers see on a daily basis, including trauma, loss of life and domestic violence, can greatly affect their mental state.

The police department created a Community Police Advisory Team in 2020, which is a platform to allow community members to have direct connections to making change. Dejuana Bigelow is in charge of the team and grew up in Burlington. She said when she was younger, her view of law enforcement was negative because of how people of color were treated. Now, she said there is a better connection between the police and the community.

“There was definitely a disconnection in my neighborhood, in our community when it came to police officers and policing in our neighborhood,” Bigelow said. “It was definitely not the way that it is now. It was no one just coming around to see the residents and meet them before, it was no proactive measures. Everything was always bad.”

George Hill is also a member of the advisory team, having lived in Burlington for more than 30 years, and said short-staffing of police officers in Burlington directly affects community relationships. Even though he is working with the police department on reform, Hill said there is more to be done to improve the relationship.

“Our biggest problem is manpower. Until we can get policemen back in the community to get to know the people, and people get to trust them, you have to stay and talk to them,” Hill said.

For Bigelow, she said the biggest problems facing Burlington are juvenile crime and lack of civic engagement. Yet, one challenge they both agree on is representation in the department.

Hill said if the department hires enough officers, it can continue to work on community relationships. He said people don’t trust the police because of lack of visibility on some occasions, but sometimes they don’t act to change that.

“Citizens do not trust the police. I think it’s a myth with them because they don’t get out. They do not attend meetings. When they attend, it’s a gripe session. They’re always griping about something, it’s not like, ‘OK, let’s listen,’” Hill said. “They want immediate gratification.”

Bigelow agreed with Hill, but noted that having 23 Black officers in the department is still progress. She also said there is still a level of mistrust between her and law enforcement, but is actively working to build trust and change her community’s perspective. Her solution is funding for more programs to decrease juvenile crime and build community engagement with law enforcement.

“I have to be involved in hopes that our children, my children, your children, the people that live here in Burlington, especially those of color, so that they’ll one day have a fighting chance,” Katkowski said. “They’ll one day be able to pick the phone up and feel very comfortable, just as my white friends who feel comfortable calling the police. We deserve that same security.”

Katkowski said she feels that residents need to take into account more than just one experience they had with a police officer. To help combat this issue, she said she trains her officers on various scenarios, including use of force.

“What we learned was that we need to step up, like duty to intervene. You got to say something, you got to save each other,” Katkowski said. “As hard as it can be telling a sergeant, ‘Hey, get up off them’ or, ‘Hey, back off,’ whatever that is, we’ve gotta train our officers to be able to do that.”

Use of force has been a major area of concern since 2020, when George Floyd, an unarmed Black man, was killed by a police officer in Minneapolis, Minnesota. Hill, a Black man, said this affected the Black community’s relationship with the police greatly.

According to the FBI, 60% of police departments throughout the country reported instances of use of force to the FBI in 2021. Only 36 out of 580 agencies in the state of North Carolina reported such data so far this year, including Burlington.

Burlington Police Department has addressed its use of force policy in their 8 Can’t Wait Memo, released in 2020. The policy reads:

“Officers shall not apply direct pressure to the throat, windpipe or airway of a person with the intent to reduce or prevent the intake of air (chokehold), unless deadly force is justified.”

If use of force is warranted, the officer has to be able to justify it and report it to the department. In 2021, there were eight allegations of excessive use of force at the Burlington Police Department.

Bigelow said her goal through working on reform is for communities to know that there is a safe place to voice concerns and make changes in Burlington.

Katkowski said while there is still work to be done, she is happy with where they stand now to improve trust and relationships with the community.