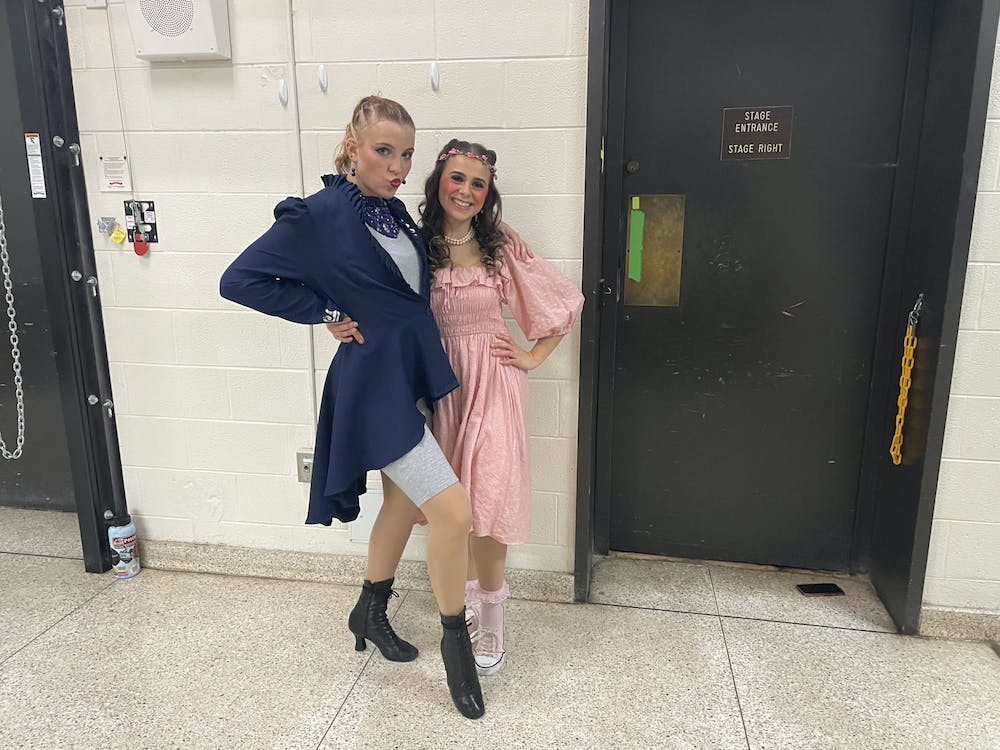 When Elon University sophomore Collin Flanagan learned the 2022 Fall Musical was James Magruder’s “Head Over Heels,” he knew he needed to be a part of it.

Flanagan had participated in a local production of “Head Over Heels” when he was in high school, but the show was disrupted by the COVID-19 pandemic.

“This is very full circle for me … to do this show,” Flanagan said. “It’s such a big emotional connection to me.”

Flanagan became the assistant choreographer for the show, alongside his peer and fellow sophomore Ella Huestis. The two worked with Professor Alexandra Joye Warren to choreograph the show.

“This is my first official show that I have choreographed,” Flanagan said. “It was so much fun to actually get into it and spend hours in the studio working with Ella and choreographing the show and just sharing my art with a dance ensemble that cares so much about the show and is so passionate about it.”

“Head Over Heels” is a The Go-Go’s jukebox musical based on “The Arcadia” by Sir Philip Sydney, which creates a contrast between its Elizabethean era, Shakespeare-style dialogue and rock music score. The musical features several hit songs from The Go-Go’s discography, including “We Got the Beat,” “Our Lips are Sealed” and “Heaven is a Place on Earth.” The show follows the kingdom of Arcadia and its people as they attempt to avoid fulfilling an oracle’s daunting prophecy.

“Head Over Heels” is also the opening song of the show’s second act.

“It was the first song that Ella and I ever choreographed,” Flanagan said. “Seeing that come to life in the beginning of act two is really, really emotional for both Ella and I.”

Junior Jaid Green is a member of the show’s dance ensemble and praised Warren’s, Flanagan’s and Huestis’ work.

“It’s the fiercest, kick your face, pirouettes to no end, jazz dance choreography, and it’s just so much fun to just challenge myself to do that … and to get to show that off,” Green said.

Green had heard of the show before learning about auditions but was not very familiar with it. Since rehearsals started in August, she said she has grown a deep connection to the show and what it stands for.

“There’s a lot of queer characters, and I identify as queer, so seeing that representation on stage is really, really nice and to be a part of that representation,” Green said. “I feel very proud to be doing that and to be part of a show that is so diverse in gender, sexuality, and all that.”

Going into opening night on Oct. 28, Green said she was excited to perform the show in front of an audience for the first time.

“I’m looking forward to hearing what will get laughs,” Green said. “I’m really excited to see how an audience will affect the cadence of the show … how it affects the cast’s entire energy and how we push through and have fun.”

As a member of the dance ensemble, Green transitions through several characters during the show.

“I go from being an Arcadian citizen and then I go to being a snake and then I’m an owl and then I’m a mermaid,” Green said. “I just get to have a whole bunch of different fun, spunky characters throughout the whole thing.”

Senior Jackie Mate plays the role of Philoclea, the youngest princess of Arcadia. Mate interacts with each of the performers throughout her time on stage, but she said she also connected with all of the cast members during the rehearsal process.

“They’re all incredible,” Mate said. “Working with them through this crazy process for six to seven weeks has been a privilege, and I am so — no words — over the moon happy.”

Mate, Green and Flanagan outlined several reasons to see the performances, including the show’s sense of humor and complex choreography. However, the show is more than its witty writing, intricate costumes and the complex choreography performed by Elon’s dancers and actors.

“It’s about learning more about yourself,” Green said. “It’s about acceptance. It’s about embracing change.”

This performance includes theatrical haze, strobe lighting, adult themes and adult language. The show has a two hour and 45 minute run time, including a 15 minute intermission.