“Concord Floral” will run through Oct. 11 in Roberts Studio Theatre 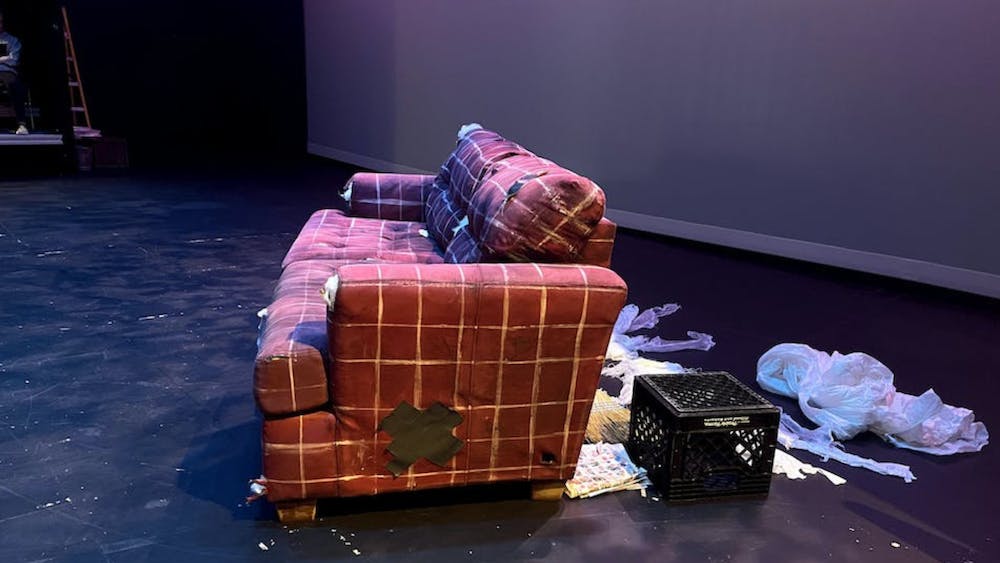 Elon University junior Jonathan Jensen made his debut as lead scenic designer in the Department of Performing Arts’ production of “Concord Floral.” The fall play will run through Oct. 11 at Roberts Studio Theatre in Arts West.

Over the span of 80 minutes, members of the cast and crew portrayed a haunting story of fear, friendship and forgiveness. Jensen said he hopes the play will open conversation about the awkward experiences of adolescence for the audience.

“Everyone has all these insecurities that no one ever talks about,” Jensen said. “We all feel weird, no one is normal. This helps bring up that topic and open it up a little more, that everyone has these situations going on.”

The play, written by Jordan Tannahill and published in 2016, is a horror drama where a group of teenagers find refuge in each other and an abandoned greenhouse when they are forced to confront the past. Tannahill wrote the play based on his own experiences growing up in the Canadian suburbs, his visit to the actual abandoned Concord Floral greenhouse in Ontario and a collection of short stories from the 14th century.

“It wasn’t quite what I was expecting it to be, but in a fun way,” Evans said. “It’s an interesting little show.”

“Concord Floral” is a reimagining of Giovanni Boccaccio’s short story collection “The Decameron,” where a group of 10 youth run away from plague-ridden Florence together to an abandoned villa. “The Decameron” itself is featured in the play as the basis for the friends’ get together: an English project.

In his playwright’s note, Tannahill describes the play as a portrait of the “liminal spaces adolescents claim for themselves. … of danger and desire.”

“Not only spaces metaphorically, but spaces physically,” Kapp said. “There is no real set. … We really have to make the space our own and find ways to take the space for ourselves.”

Kapp was the understudy for the character named 6 (Nearly Wild). In both the playbill and the script, characters are referred to by numbers rather than their names.

Jensen worked with the actors to curate the props.

“Most of the set is more barebones. The couch, the 3D hangings, the plastic drapes,” Jensen said. “It helped add to the sort of dread throughout the show. … it gave you a sense of the loneliness.”

Delinquent teens are not the only characters in the cast. A fox, a couch, a bobolink and the greenhouse itself are all speaking roles, played by sophomores Delaney Lynch and Graham Cole and seniors Tommy Truitt and John-Luke Lindstrom respectively.

Sophomore Keri Anderson played 5 (Rosa Mundi) and had not heard of the show before learning about auditions. She was able to check out a copy of the script at the library before her audition in spring 2022.

“I immediately was so enthralled by the story, and I knew I wanted to be in the show,” Anderson said.

Anderson and her fellow cast members have been rehearsing for “Concord Floral” since the start of fall semester, which gave each student time to connect with the story and their characters.

“A big part of this show … is this theme of forgiveness,” Anderson said. “It’s something that I was taught a lot through this show.”

"It's given me a group of people who I will see every day and who I have gotten to know over the past couple of months."

Freshman Anabelle Sumera-Decoret is the understudy for 8 (Fox). She came to Elon from the West Coast and said being part of “Concord Floral” helped her cope with her homesickness.

“One of the themes is isolation,” Sumera-Decoret said. “You can be surrounded by people, but if you haven’t built the connections to get past that feeling of being alone.”

Sumera-Decoret said the play itself helped her feel less homesick, and being part of the production is what really helped her transition to Elon.

“It’s given me a group of people who I will see every day and who I have gotten to know over the past couple of months,” Sumera-Decoret said.