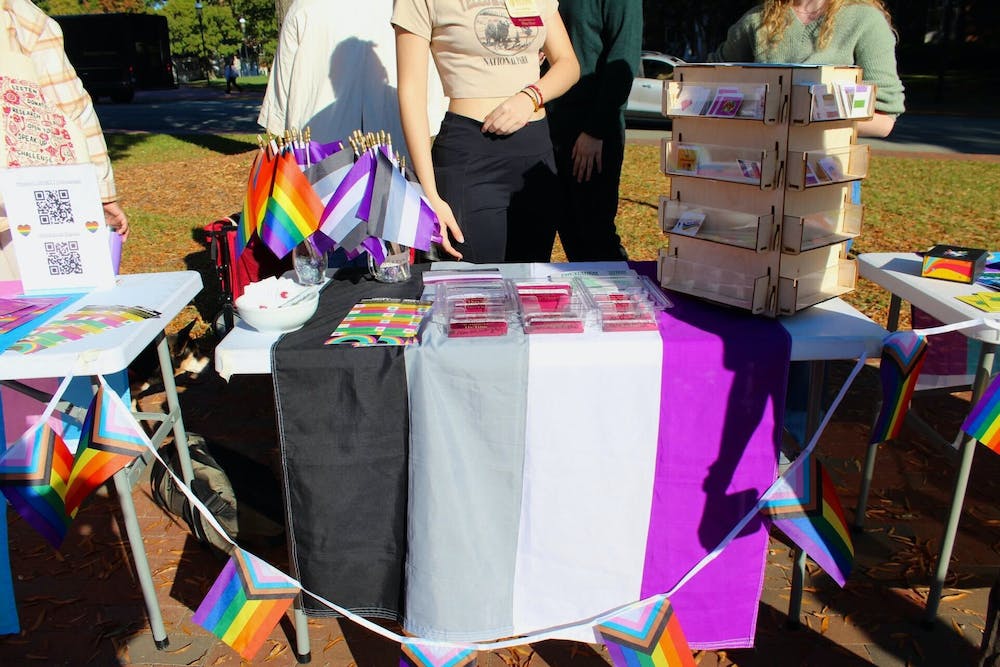 Elon freshman Guillermo Vizuete didn’t know they identified as asexual until they found the label online. Vizuete, who uses he/they pronouns, said that the label seemed to “fit.”

“I don't really feel sexual attraction. I have no idea what that feels like so it kind of just fits,” Vizuete said.

Finding the label allowed Vizuete to educate themselves on an identity they weren’t even aware of. From Oct. 23 to Oct. 29, Asexual Awareness Week – also known as Ace Week – aims to continue that trend among everyone by “raising awareness and expanding education of asexuality,” according to the official Ace Week website.

Elon’s Gender and LGBTQIA Center has a goal parallel to Ace Week – it wants to educate the Elon community on asexuality and its misconceptions. On Tuesday’s College Coffee, the GLC’s table gave out asexual pride flags and information cards about asexuality, as well as displayed a larger asexual pride flag.

The Ace and Aro website defines asexuality as experiencing little to no sexual attraction to anyone or not experiencing desire for sexual contact. Asexuality is different from celibacy or abstinence in that it is not a choice – it is innately who someone is.

Vizuete is part of the 1% of the population that identifies as asexual. Because of how uncommon the identity is, Vizuete said many misconceptions come with it. Even discrimination within the LGBTQIA+ communities arises due to the debate on if asexuality should be considered an LGBTQIA+ identity at all, as cisgender, heterosexual people can identify with it.

“It has to do with your own personal sexuality or lack of sexual attraction,” Truellove said. “LGBTQIA is all about understanding the way in which we express our sexuality and what that looks like and how it might deviate from what is considered ‘normal.’”

Truellove also said a lot of misconceptions stem from lack of education and tend to arise in relationships between asexual and nonasexual people.

Thinking everybody experiences sexual attraction can cause confusion in those who end up dating an asexual person – and even some self-esteem loss – according to Truellove, because the nonasexual person might blame themselves for their partner not having a desire for sex. But Vizuete said asexuals can still feel romance, and it doesn’t have to be all about sex.

“Usually it's harder for us to date because people don't understand that asexual people can often still feel romantically attracted to people,” Vizuete said. “And when they do [understand] there’s often discrimination. They just don’t care because we often don't want to have sex.”

Vizuete added that asexual people are often labeled “childish,” a “plant” or a “robot” for not wanting to have sex, which they said is both dehumanizing and discriminatory..

Despite these challenges, Truellove said the asexual community has been able band together and support one another in times where they feel invisible.

“If you can find an asexual community of people who understand your experience, feel validated in your experience and be able to name that you're asexual, it allows you to understand what's actually going on rather than feeling like you're an anomaly,” Truellove said.

This Ace Week, Vizuete hopes Elon students – asexual or not – will educate themselves on asexuality in order to be more inclusive and to combat stereotypes.

“Not everyone experiences the world the same, and we should understand that some people don't feel sexual attraction, and that's OK,” Vizuete said. “We should be accepting and happy for them and not feel like it’s sad.”