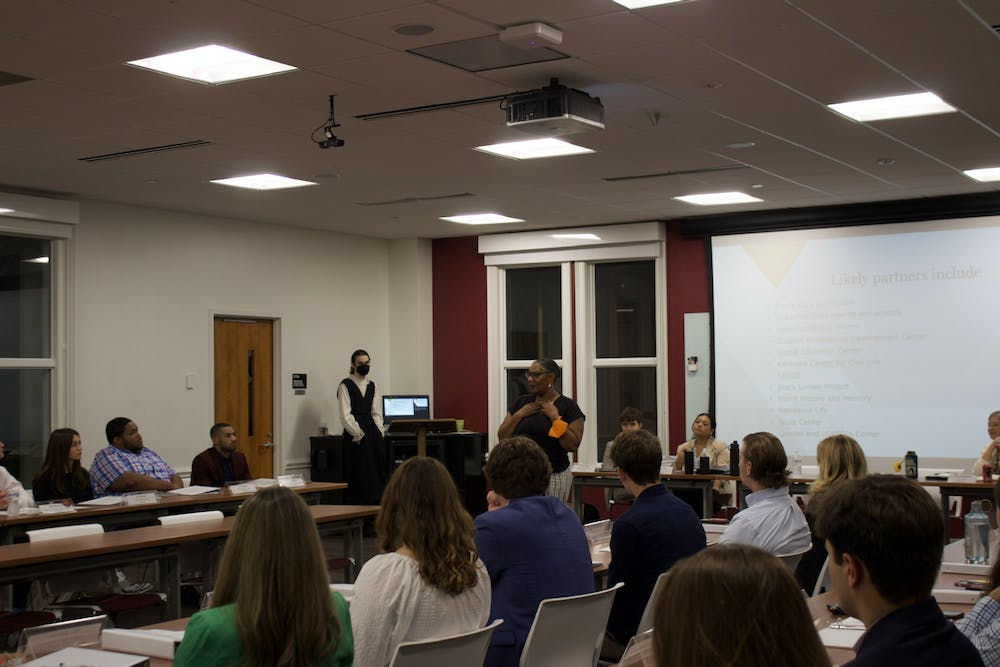 Naeemah Clark, professor of cinema and television arts, said she was moved to tears when she saw the list of faculty members involved with starting Elon’s new advancing equity initiative, centered on the addition of a four-credit course focused on racial equity. The course will first be introduced as a requirement for the class of 2027 next fall.

“It’s like the best committee on the university's campus,” Clark said. “I'll be honest, when I saw the list of people, I started to cry as a result. These are the best people to do this work.”

Clark presented on the initiative during Elon University’s Student Government Association business meeting Sept. 15. Clark said the idea for the class began because students felt it was important, then students and alumni worked to get faculty on board.

“Students started coming to us, saying, ‘You are not teaching me this information,’” Clark said. “It made us all go, ‘Oh, well, some of us are — not all of us,’ and so it shook us a little bit. Never do we create a curriculum around what students want. We don’t do that at a university. We did that now.”

Clark said the new requirement won’t add to the total amount of credits students have to take, and this initiative will be interdisciplinary to incorporate racial equity into existing classes. Even though this won’t be a required class for any student currently at Elon, Clark said she wanted to cover it with SGA because Elon is still in need of more faculty to teach these classes, even though the majority of faculty are in favor of this change

“91%, 92% of the faculty voted, said, ‘Yeah, we think our students need this requirement,” Clark said. “I'm going to faculty members right now and I’m like, ‘Would you consider changing your class?’ They’re like, ‘Oh no, I can’t.’”

Clark said she is urgingSGA leaders to talk to faculty members and ask if they think their class could work well as a part of the initiative.

This request was approved unanimously by the Senate, and Vice President of Finance Megan Curling said the finance board gave its full approval on the event. Curling said the request originally was much higher, but Haqq has partnered with other organizations, such as Campus Recreation and Wellness and Elon’s Interfraternity Council.

“Originally, the request was $15,000,” Curling said. “That was the first time the finance board saw it, and it was catering to about 75 people. So the fact that you're knocking it down $6,000 and you're now expecting almost 300 people, that’s a very stark contrast.”