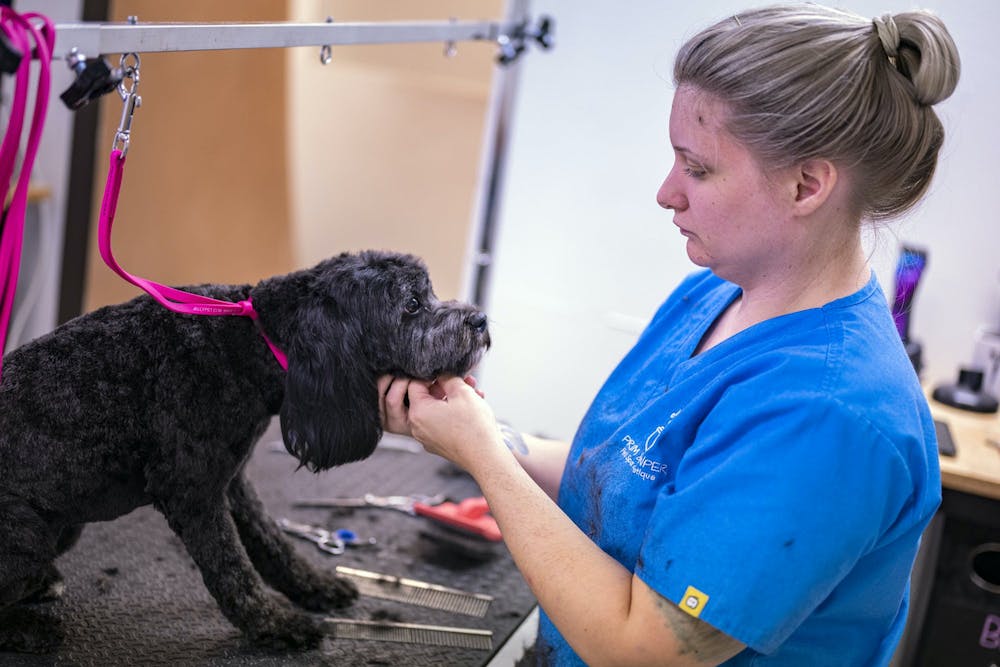 Photo by Kyra O'Connor | Elon News Network
Groomer Brooke Byrd cares for cockapoo Mattie at Prim & Pawper dog groomer in downtown Gibsonville on Sept. 2, 2022. Prim & Pawper recently moved into this location after searching for a bigger space and is now settling in at the new spot.

Gibsonville resident Jacki King walks through the doors of Prim & Pawper, a Gibsonville dog grooming business, and is greeted by co-owner Josh Tabor, who rings up her total and goes to the back to get King’s Cairn Terrier, Rosie.

King chats with another customer while she waits for Rosie, who comes out to play with a ball — chasing it around the shop and having fun with Tabor before going to her owner.

“I’m a customer — well, I’m the mother to a customer,” King said, as she pointed at Rosie playing with the ball. “She is happy. There are places I’ve taken her that she was scared, she did not like it … This is what makes it a positive experience for her.”

King is one of many customers who keep coming back to the family and veteran owned business for her pup’s monthly grooming. Prim & Pawper opened in 2021 at a smaller location in downtown Gibsonville before moving to the space it is in now at 120 W. Main St.

Run by husband and wife team Danielle and Josh Tabor, the shop has expanded to include additional groomers, bathers and a clientele that will often involve 20 dogs in and out of the shop per day.

“My favorite thing is being part of the Gibsonville community,” Danielle said. “It’s nice to have a place I can call my own and build on the community that we live in.”

Danielle grew up around dogs and knew she wanted to work with animals when she grew up. While attending college to be a veterinarian, she said she quickly realized that it was not a good fit for her because she couldn’t stomach the idea of having to put a dog down.

While in school, Danielle had a part-time job as a bather. When her employer at the time asked if she wanted to try grooming school, she accepted — and hasn’t looked back since.

“It’s been a way for me to still work with dogs and do all the same things that I love about being around dogs, without the sad depressing atmosphere,” Danielle said.

High school sweethearts Josh and Danielle broke up after graduation and reunited after Josh’s service in the U.S. Navy. The pair moved to Chicago, where Danielle continued grooming. While her clientele was growing, the Windy City proved too cold for the pair and they moved back to North Carolina.

“We almost opened a shop in Chicago,” Danielle said. “I think it got to negative 23, and I was like, ‘Josh, we're moving home.’”

After the positive feedback Danielle said the couple got from pet-sitting and grooming out of their home, Danielle said she felt like it was the right time to expand.

“What I like about it is that it keeps me busy,” Danielle said. “There’s always always something new, you don’t do the same thing every day.”

Josh said he and Danielle looked at the storefront in the original location once and were sold. The Main Street location was a big part of the decision to begin work out of the 700-square-foot shop, Josh said. After great success in the original shop, the two decided to expand to accommodate the growing number of customers.

Just three months later, Prim & Pawper moved to its current space, which is over three times the size of the original store. Now, the shop has retail items, more grooming space and new employees to help with the expansion.

While Danielle loves her work at Prim & Pawper, she said the most common misconception people have about her job is the nature of grooming itself.

“The biggest thing I tell people when I’m a dog groomer is ‘oh you get to play with dogs all day!’” Danielle said. “As much as I love being around dogs, it’s a dirty job. It’s a dirtier job than people realize.”

Mebane resident Cesar Rios, one of the newest employees, knows all about the dirty work behind the scenes — as a bather, he spends his days washing and blow drying fur as well as cleaning dogs’ nails and ears.

“He has a good temperament for dogs,” Josh said. “You have to be pretty patient with dogs at times, and he does good with them.”

Rios said he has grown up with dogs and enjoys interacting with them at his new job, but Josh and Danielle also make working at Prim & Pawper really special. Another new addition to the team, Brooke Byrd, agrees.

Byrd said her favorite part of being a groomer at Prim & Pawper so far is the before and after for each dog who comes in. Byrd started at Prim & Pawper in April and works alongside Danielle at the shop.

“That’s really the best part of it so far is just seeing customers’ reactions and me being able to see the before and after of it,” Byrd said.

There are many reasons why customers at Prim & Pawper come back month after month for their pet’s needs, customer Isabelle Amick said. From the Tabor’s two-year-old son, Leyton — the official “treat giver” at the shop — to the prices and atmosphere, customers say there is a lot to like.

Amick’s dog, Brownie, has gone to Prim & Pawper countless times. Even though Amick moved from Gibsonville to Greensboro recently, she still makes the commute to bring Brownie to Danielle.

“I love that it's a family business,” Amick said.

Josh, Danielle, Leyton and the Prim & Pawper staff will celebrate the grand opening of the new, larger space this Saturday, Sept. 10, from 1 to 4 p.m. The shop will be accepting donations for a local rescue group and will also include the chance to enter a raffle giveaway. The raffle prize includes a grooming certificate, dog treats and dog toys. Customers are also welcomed into the salon, people and dogs alike, for a tour of the space and the opportunity to meet staff members.