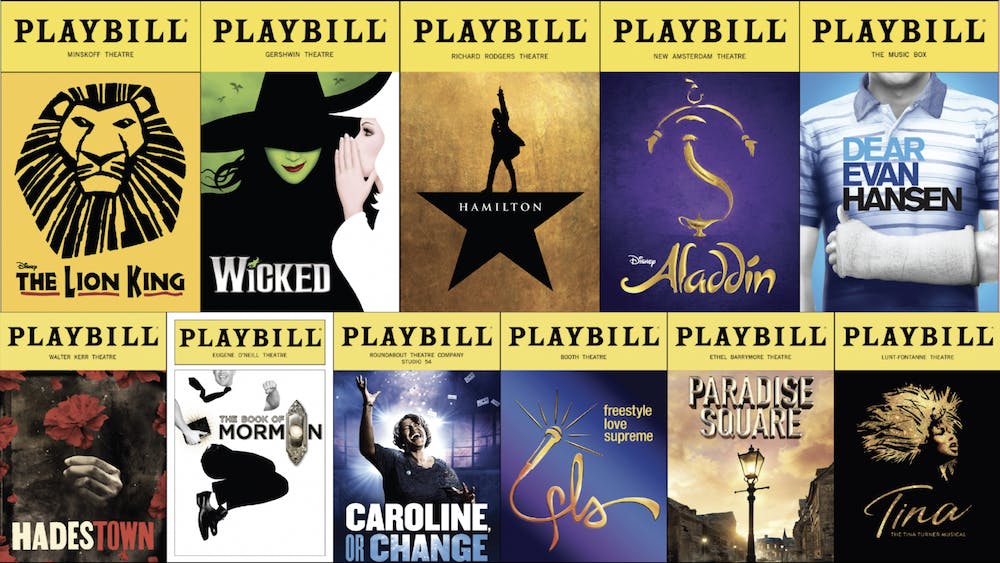 Playbill, a national magazine and website for theatergoers, released its 2022 Big 10 list earlier this month, ranking American colleges and universities by the number of current students and alumni who performed in a show on Broadway from Aug. 22, 2021 to May 4, 2022.

Elon University received an honorable mention on Playbill’s annual ranking of the top 10 colleges and universities represented on Broadway — evoking mixed feelings of pride and hesitation within Elon’s Department of Performing Arts.

Playbill, a national magazine and website for theatergoers, released its 2022 Big 10 list earlier this month, ranking American colleges and universities by the number of current students and alumni who performed on Broadway from Aug. 22, 2021 to May 4, 2022. Elon tallied 17 alumni on Broadway this year, but it was not the university’s first time being featured on Big 10. It received an honorable mention in 2016 and was No. 10 on the list in both 2017 and 2018.

Julios Matos Jr., the director of Elon’s music theatre program, said while Elon’s ranking inspires pride in the program’s alumni, he does not consider it a sole indicator of success.

“Working on Broadway, it means that the training is working, … that the formula is working,” Matos said. “But we’re also celebrating the students who are in national tours, who are in regional work, who are also going off and doing music directing or doing a whole different field, a related field in IT or real estate.”

Playbill only includes actors in its list, which Matos said ignores the contributions of choreographers, set designers, production managers, costumers, directors and other crew members.

Elon alum Michael Callahan ’13 was featured on this year’s Big 10 list for his role in the Disney musical “Aladdin” at New Amsterdam Theatre. Like Matos, Callahan is critical of Playbill’s decision to only recognize Broadway actors.

“There’s some kickass theater people from Elon who are not necessarily on the stage, and they need shoutouts,” Callahan said. “Some of them are in my building, some of them are in the New Am[sterdam] Theatre, and I’m bummed they don’t get the same recognition. … A lot of the people keeping the show alive are not on that list, they’re not performers, and I think that our industry needs to do a better job of giving equal recognition.”

“I literally Googled ‘best musical theater schools in the country,’” Mate said. “I did find Elon through … something on Playbill.”

“It just constantly reminds me that I made the right choice,” Watts said. “Being able to come here, and then see like the fruit, how that has grown out of this experience and the amazing people that have gone on to have better and great careers and everything. … It also shows just kind of that Elon spirit that never leaves you.”

Watts said that the structure of Elon’s performing arts department has already helped her pursue a variety of opportunities, such as “Into the Woods” at Tulane University’s Summer Lyric Theatre.

“It definitely is setting the standard and setting the stage for every other job and opportunity that I will get outside of this,” Watts said. “It prepares me in more ways than I can honestly expect.”

While Watts and Mate have dreams of being Broadway performers, Callahan said he wants them, and the rest of Elon’s music theatre students, to know that “there is no exact pathway to being a successful performer.”

“The biggest mistake theater people make, especially coming from BFA programs, is that they assume, ‘If I am not on Broadway within the next one or two years then I have already failed,’” Callahan said. “That does a disservice to the talent that comes out of these schools and a disservice to the idea of what theater is about and how it exists.”

The Department of Performing Arts’ next musical, featuring Mate and other music theatre students, will be “Head Over Heels,” opening on Oct. 28. Tickets go on sale Oct. 7 and will be available for $15 or free with an Elon ID.