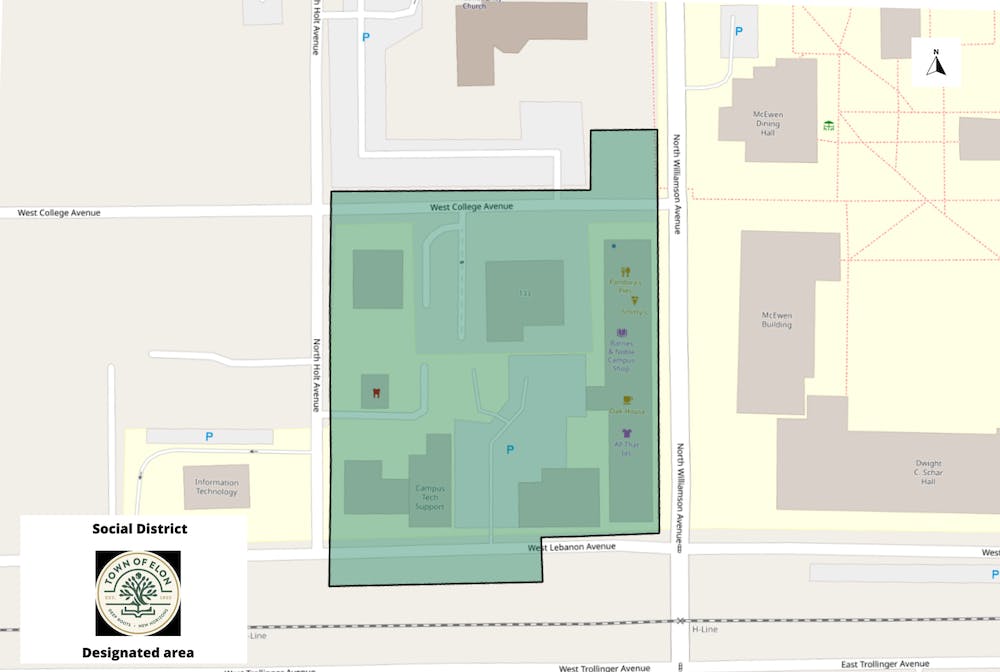 Proposed map of the social district in downtown Elon. The council is waiting to move forward until there is a more detailed map as parking lots are not included in the district.

At Elon's regular town council meeting, council members debated the repercussions of making downtown Elon a “social district.” This change would mean that in a limited space, beer and wine purchased from local restaurants can be enjoyed outside.

Jill Weston, downtown development director, gave the details, though she said not too much is changing from the pandemic law put in place that expired Aug. 15.

Residents who are 21 years of age would be able to bring two drinks outside per person. The drinks are in designated, disposable clear cups with the social district logo, the restaurant it was purchased from and the date, according to Weston. The hours are proposed from 10 a.m. to 10 p.m.

A concern among the council was the specific areas of downtown that would be included. The map that Weston provided was not detailed to the smaller areas that would not be included, such as parking lots and the Taphouse, an event space owned by the university.

Council member and reverend of Elon Community Church Randy Orwig is in favor of having a social district.

“The restaurants are already selling at some level and doing those kinds of things, we're actually helping to create a moderation station,” Orwig said. “I like the idea of making it more exact.”

Council member Monti Allison was concerned about the effects a social district would have on the town, especially with downtown being so close to campus.

“That's going to be interpreted in different ways, as we saw this past weekend,” Allison said. “There's confusion about young adults not understanding that you can't walk around with alcohol. Now, how do you avoid saying well, ‘I didn't know that part or that sidewalk or that property was out of bounds?’”

Elon resident and police officer Edward Peters also expressed concerns over the college students drinking, especially after the Elon Police Department gave out 38 citations earlier this month. Peters has been working at the department for over 10 years.

“I’m for the expansion and doing things, but I'm also for safety too,” Peters said. “I've seen a lot, and I just can't underestimate how the alcohol affects it.  And I'm not saying we don't need to do something to help the business, but I just think opening up such a wide space is going to be the same.”

The specific areas are to be labeled with signs and will include QR codes with the borders of the district.

The council will vote during its next meeting on Sept. 26 on how to proceed after viewing a more defined map.

On July 25, the council amended the original plans for downtown by adding a streetscape onto North Williamson Avenue. With these plans now added, the council motioned to move forward with the consulting firm Benchmark to create the master plan for the downtown area as well as a conceptual design for North Williamson Avenue. With this motion, Town Manager Rich Roedner will begin to negotiate pricing for the contract.

Streetscape is in architecture; everything you see on a street, including the road, sidewalk, benches, trash cans, etc.

happens to them because it's really up to the next developer,” Orwig said. “A developer comes in and they decide to do exactly what they want to do anyway. I've never seen them actually complying, really 100%, of what we've been planning.”

The board also debated the new absence policy for boards and committees that Roedner had presented after Gov. Roy Cooper’s emergency declaration about remote meetings expired Aug. 15. For non-quasi-judicial boards and committees, including the Appearance and Sustainability Committees, the council would recognize remote, hybrid and in-person meetings.

After amending the policy to only having remote meetings in case of emergency, the board motioned to pass.

The town of Elon recently received two grants from the federal government — $300,000 for reinforcing lead and copper water pipes and $60,000 for transportation, including bike or walking paths. Roedner said these will have formal action at the end of the month.