Students this weekend were cited for underage drinking and open container violations, resulting in 47 charges 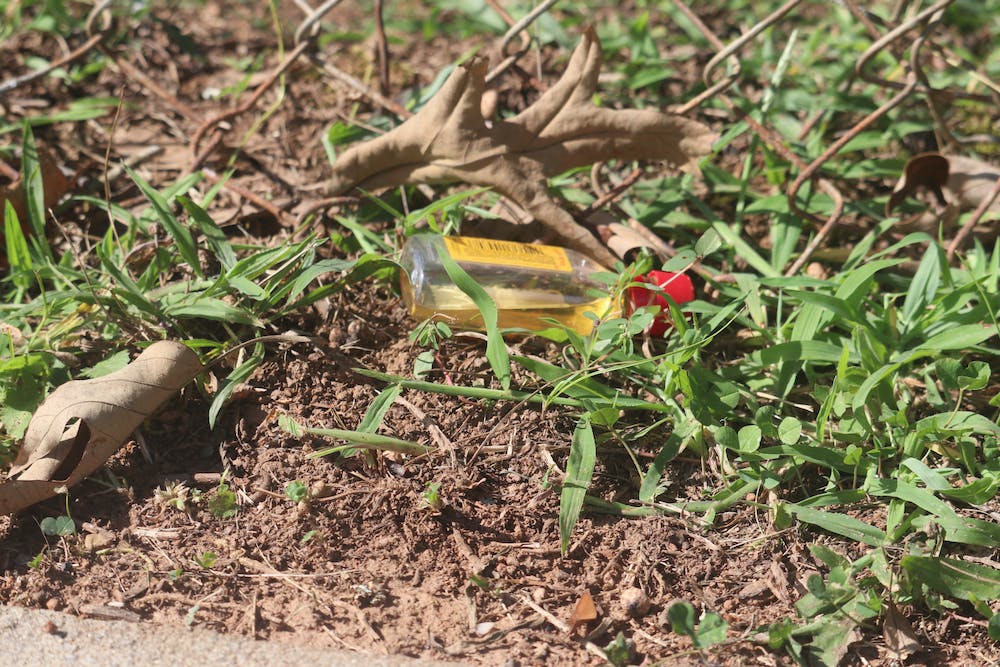 A discarded Fireball Whiskey miniature bottle sits in the grass on West Lebanon Avenue on Sept. 6.

Since Sept. 2, the town of Elon has charged 20 students with underage drinking and 18 for open container violations. The department worked undercover Friday night to zone in on underage drinking in partnership with Alamance Alcohol Law Enforcement Response Team, which also goes to other towns in the county.

Senior Matt Trez said over the weekend, he noticed a heavy police presence and an increased number of students being stopped for open containers. He said he is concerned that this could lead to more crimes to be committed in the town.

“It creates a culture within Elon where kids feel more tempted to break the law. I know 21 year olds who have no issue getting in a car and drunk driving so that a cop cannot see them carrying their case of beer or carrying whatever,” Trez said. “And I think it actually creates a more dangerous atmosphere when the cops scare Elon students off of the streets.”

Town of Elon Lt. Kedrick King said over the weekend, his department did cite students for open containers, clear cups with alcohol in them and disorderly conduct while walking through town. He said the goal with undercover policing was not to intimidate students but to educate them.

“The biggest thing for us is just, it’s an educational piece. We want to get out here and let people know that we are observing these things,” King said. “We know that this is a big issue within the town, as well as within the university.”

However, Trez said he believes this did more harm than good, inciting fear into students, especially freshman.Trez has lived in an off-campus house behind the Elon Fire Department for two years, and last semester, he said there was a neighborhood coalition in the area to bridge the gap between students, Elon residents and police officers.

Now, he said there is a lack of consistency and communication with the police department’s goals.

“The expectations should be laid out, and for people who have lived off campus for a second year now, I think a lot of us are, not so much confused, but shaking our head because we had such a good thing going last year with this coalition,” Trez said. “And I’m not really sure where that’s gone, since, it’s pretty obvious the Elon police department targets certain neighborhoods, which is to be expected.”

Sophomore Madelyn Slattery also said she saw more police officers and cars being stopped by police this weekend, and the increased police presence made her more nervous to go out this semester.

“I’m definitely very scared now. I think I’m a pretty good student, and not as out of control as some of the Elon students,” Slattery said. “Just walking around, I shouldn’t be afraid that some police officer is going to come up to me and ask for my student ID, and I’m going to be pushed into some sort of false statement, even if I’m not doing anything wrong.”