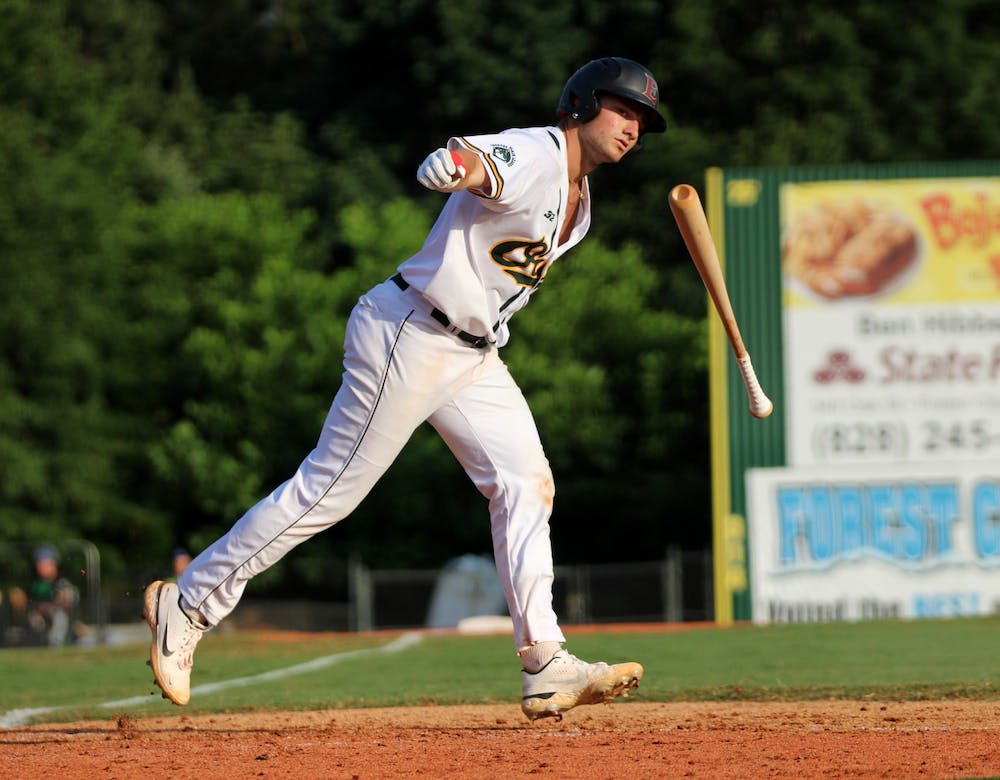 
Will Vergantino flips his bat on his way to first base after receiving a walk against the Asheboro Zookeepers on June 6 at Mcnair Field. The Owls lost 11-4.

“It definitely has turned out to be positive,” Vergantino said. “It's a tight-knit group of people in this town, and everybody knows each other's names.”

Vergantino is one of 17 Elon baseball players who competed in wooden-bat summer collegiate baseball leagues this year. The Owls are a member of the Coastal Plain League, one of the premier collegiate summer leagues in the southern United States.

The Owls have been in Forest City, a town of just over 7,000 people in Rutherford County, since 2008. While the team had the smallest attendance in the CPL this season, Vergantino, a Lumberton, New Jersey native, said he enjoyed interacting with the team’s regulars at home games.

“A lot of the crowd are people that we see everyday, and you expect to see them there,” Vergantino said. “It's a really neat thing because even in my hometown, I don't see anything like this. Everybody knows each other's names, and you get to the park and you see people waiting in the parking lot and say hello, and they're quick to give you a smile and wave back.”

Vergantino’s said his main focus with the Owls was developing his game in preparation for next spring. After missing significant time in his final two high school seasons due to Tommy John injuries in his elbow, he was not an everyday starter in his redshirt freshman season at Elon last year but hopes to see the field more next season.

Vergantino finished the season with a .211 batting average, one home run and seven RBI in 95 at-bats. Among Vergantino’s biggest concerns was becoming more comfortable with a new swing he adopted in his final weeks at Elon this spring.

“Coming into summer ball, I just wanted to further that and keep on refining it,” Vergantino said. “I feel like I've been doing that, which I’m excited about.”

While Vergantino spent the summer working on improving his game, he was also responsible for positively representing Elon within the Forest City community, something Elon head coach Mike Kennedy said he would thrive at.

“He’s the kind of kid you'd want to marry your daughter,” Kennedy said. “He's just a super kid, very respectful, and goes about it the right way on and off the field.”

According to Kennedy, summer leagues are crucial for hitters so they can continue to see live pitches and keep their swings sharp.

“When we send them out in summer ball, they have a plan, and they know some things that they really need to do and work on,” Kennedy said. “You're hoping that they can accomplish that during the summer.”

Rather than live with a host family for the summer, Vergantino spent the season living with several other Owls players in a house in Forest City. He said living with some of his teammates helped him build stronger connections.

“You spend every second of the day with them,” Vergantino said. “That's how you build friendships is spending time around people, and you’ve got no choice other than to do that with the situation.”

The Owls finished the season with a record of 22-25 and missed the playoffs. Vergantino said his time in Forest City has helped him feel more comfortable with his swing, and he is excited to return to Elon for next season.

“I think I'll have a lot more success and be able to help my team out a lot more than I have in the past,” Vergantino said.