Students present research upon completion of SURE program 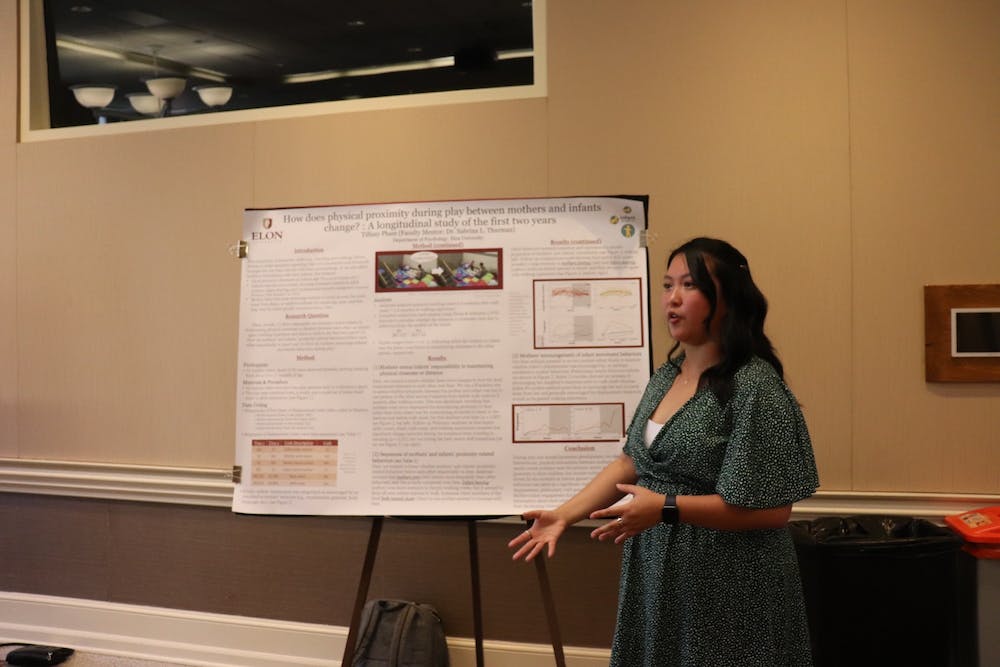 Elon senior Tiffany Pham has been working on her research about mother and infant interactions for a year and a half. Pham said her research through Elon’s Summer Undergraduate Research Experience has allowed her in the last 8 weeks to explore her topic on a deeper level.

The 45 students in the SURE program have worked full time throughout the summer with faculty research mentors on programs of interest. Each student received a $3000 stipend, and the program culminated in a poster session July 20, giving students the opportunity to showcase their research.

Pham said going from finishing her first round of coding in April to having a completed project after the summer was very satisfying. She said her topic of mother and infant interactions was something that interested her because it is a fundamental life stage.

Pham said one of the most interesting things she has found has been looking at newer research on the role gender plays in a mother and infant relationship. Pham said this aspect is something she wants to continue learning more about.

“Sons tend to be encouraged to explore and develop on their own, and daughters tend to stay closer,” Pham said. “Hopefully in the next few weeks, and especially in the next semester, to finish looking at those stages of nourishment and see if there is a gender difference.”

Sophomore Bailey Reutinger’s summer experience has looked different from Pham’s, as she said this research was new to her, having completed only one year at Elon so far. Reutinger said she began researching her topic of dendrochronology, the study of tree rings, after talking to one of her professors and seeing what research opportunities he had.

“I knew I was interested in research,” Reutinger said. “My mentor’s Dr. Bussberg, and I had a class with him, and I just asked him what research opportunities he had. And he mentioned that he’d done different things with tree rings before, and I found that really interesting.”

Reutinger said her research focused on uneven sampling on tree saplings and she said for next steps for her research she hopes to look at the data she’s collected in different ways and take what she’s learned through SURE into later projects.

“I've identified multiple ways of combining this data, but so far, I've only really tried averaging it,” Reutinger said. “I also want to try looking at the correlation.”