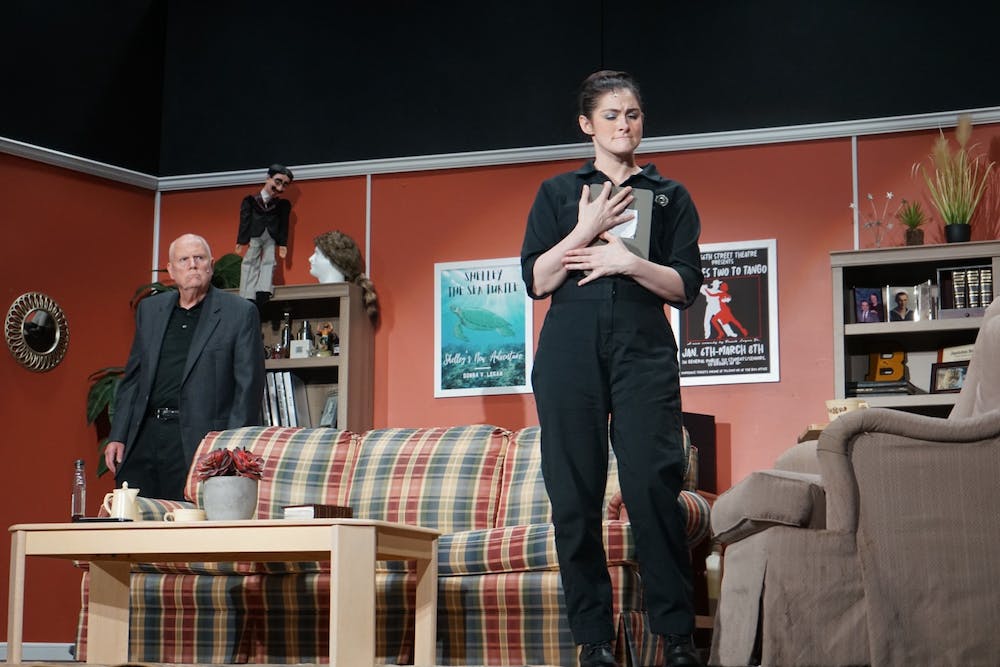 
Two characters face generational differences and try to understand one another's references and mannerisms on stage during a dress rehearsal for "The Last Boomer on Earth" June 22.

For Dave Wright, the playwright and director of the Paramount Acting Company’s newest original play “The Last Boomer on Earth,” the show is a walk down memory lane.

“This is very autobiographical,” Wright said. “I drew from my own experiences, which I hope would be kind of representative of my generation.”

“The Last Boomer on Earth” is set in the year 2073. Franklin Delano Logan Jr. is a retired playwright and widower who deeply misses his wife, and despite being 123 years old, appears to be in his 60s.

Logan Jr. receives a visit from Alex Steinberg, a researcher for an undisclosed group known as The Agency. Steinberg informs Logan Jr. that he is the last surviving member of the baby boomer generation, and over the course of two meetings, they discuss the experiences and critiques of his generation.

Wright, who serves as the managing director of the Paramount Theater and artistic director of the Paramount Acting Company, came up with the show’s concept in early 2020 while scrolling on Facebook. He said he noticed a trend of comments that said, “OK boomer,” intending to mock the baby boomer generation, which led Wright to reflect upon his own generation and its perceptions and stereotypes.

"Most generations look back at the previous one with some kind of trepidation or some kind of criticism," Wright said. “Some of us, in fact, were pampered … but there were a lot of other people who weren’t.”

Wayne Leonard, who plays Logan Jr., said he relates to his character and has enjoyed reliving the past while portraying life in the future.

“I'm about the same age as this guy, so he has a lot of the same memories that I do growing up,” Leonard said. “It's a lot of fun latching on to the cultural icons that I grew up with and remembering those things.”

Ashley Phipps, who plays Alex Steinberg, wrote in an email to Elon News Network that she loves how many references to American classic television shows and films her character makes throughout the show.

She said she remembers watching classic films and television shows like “Gone with the Wind” and “I Love Lucy” with her baby boomer parents when she was a child.

“I’m about 112 on the inside, so I understood all of the retro references,” Phipps wrote. “My excitement onstage is just me channeling my inner toddler.”

Wright said he hopes audiences will feel a sense of hope and relief that the human race is able to make it to 2073.

“The generations go on,” Wright said. “Despite our differences, there are things like family that hold us together and keep us upright.”