Members of class of 2022 reflect on Peace Corps Prep program

The program helped some figure out their career and see the benefit, even without going straight into the Peace Corps 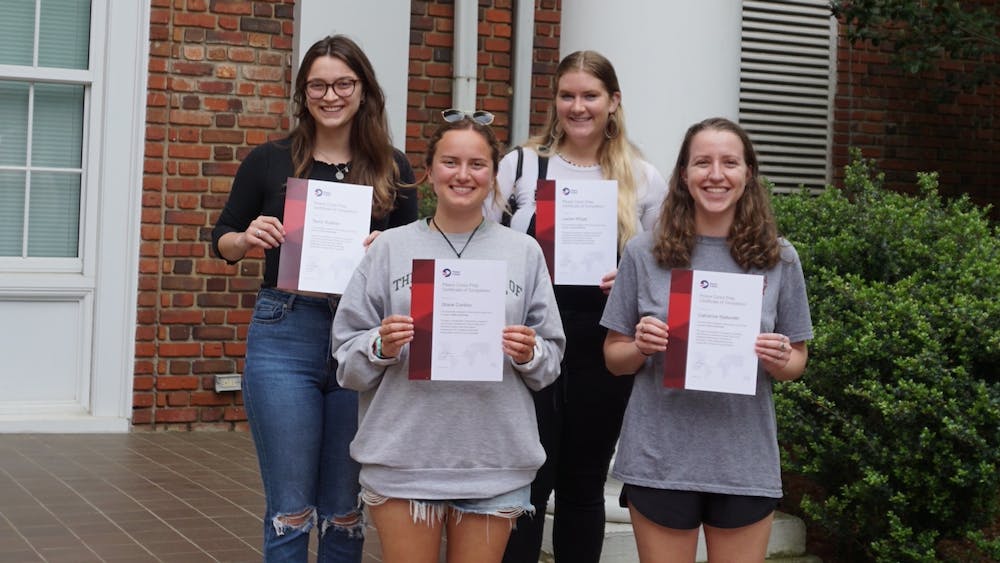 For Elon University alumna Sophie Winston ‘22, the Peace Corps Prep program changed the trajectory of her career, despite her not planning to immediately join the international service organization.

Winston began the Peace Corps Prep program as a freshman because she wanted to test out if she enjoyed doing it.

Winston’s career plans have changed since she got into college, but the Peace Corps Prep remained of interest to her. Winston, who graduated with degrees in English and cinema and television arts, now said completing this experience has opened up future opportunities for her and broadened her worldview.

“I always wanted to have an opportunity to teach English to other people, not really right after college, but at some point in my life,” Winston said.

As a part of Peace Corps Prep, Winston worked at Alamance Community College and taught cultural English, including giving lessons on more complex topics such as how American elections work. Winston said this was one of her favorite parts of the program, as it allowed her to work with people in the Burlington community and learn more about the area she lived in.

This was something she not only enjoyed doing, but had an impact on her current job and worldview.

“For Elon, it’s obviously getting to see the different groups of people, and how poverty and different areas affect different groups of people, and how learning English just in general can really help people and does help people,” Winston said. “I work for Discovery Channel, and a huge part of that process was related to seeing how the impact that their documentaries, movies and stuff have on kids.”

The effect the Peace Corps Prep had on alumna Lauren Whyte ‘22 has looked different, as Whyte said she didn’t take a traditional path to complete the program.

“In my first year at Elon, I was really interested in possibly joining the Peace Corps after graduation,” Whyte said. “I knew I wanted to do something international, and that was just an option for me. So I signed up for the prep program as a freshman, and then didn’t really do anything with it for a while.”

Whyte became more involved in the program her junior year after taking a class with Jennifer Eidum, Elon English professor and director of the program. Initially, it didn’t seem to align with Whyte’s post-graduation plans, as she did not plan on going into the Peace Corps and is now  attending law school.. Whye said she now thinks the skills she learned throughout the program helped prepare her for the types of international work she hopes to do in the future.

Whyte said the internship she completed with Sustainable Alamance was one of the most impactful parts of the program.

“I worked with formerly incarcerated people, specifically to help them gain employment but also access to other opportunities like housing, getting driver's license, mental health, drug issues. There was a variety of reasons that ends up impacting employment in the long run,” Whyte said.

She worked about three times a week with Sustainable Alamance last school year, and she now wants to do similar work on a national level after obtaining her law degree.

“It helped me focus more on a specialization,” Whyte said. “I didn't really know what kind of law I wanted to do, just something international. I think this internship really helped me understand the actual impact that economics and employment and money can have on a community and how, within the legal standing behind that, how laws can really change a community.”

Both Winston and Whyte said they recommended the program to any interested students, even those who don’t plan on immediately joining the Peace Corps.

“The opportunities that completing the program can bring to you and bring to the world around you — it's so beneficial, and I think a lot more people should do it,” Winston said. “Especially also because it's not super difficult to do if you're already doing something in English or communications.”