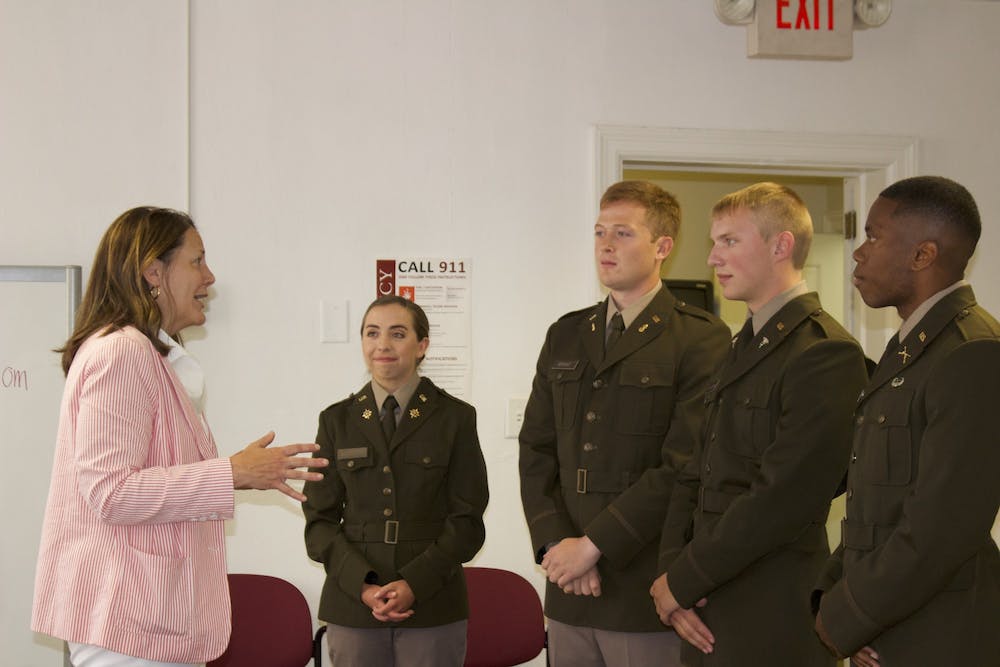 Just one day before they’re set to walk across the stage and receive their diplomas, four Elon University seniors took the oath of office and were commissioned into the U.S. Army on May 19.

During the ceremony, cadets took their oaths, were pinned with second lieutenant bars by those close to them and received their first salutes as commissioned officers. The commissioning ceremony is the culmination of four years of training and signifies the beginning of military service for each cadet.

Twenty years ago, following his graduation from Elon, Lt. Col. John Kirchgessner was commissioned in the Air Defense Artillery. Today he returned to his alma mater to address four students — Richard Bright, Patrick Brundidge Jr., Victoria Sardegna and Austin Stillman — as they transitioned from cadets to officers during the North Carolina Agricultural and Technical State University Army ROTC Commissioning Ceremony.

“What you have done at such a young age surpasses what many will do in a lifetime, but for you, it’s only the beginning,” Kirchgessner said. “What you’re about to embark upon is incredibly challenging if you’re doing it right. With the grace of challenges comes the grace of rewards.”

Lt. Col. Linda S. Wynn, NC A&T professor of military, said the ceremony is a mark of years of training and dedication.

“The commissioning ceremony is a culmination of years of steady training and extracurricular activities that result in the cadet becoming an officer,” Wynn said. “It also marks the transition from student cadet to being a leader of soldiers.”

“You see ladies and gentlemen, the cadets seated before you are tactically proficient and skilled at leadership,” Wynn said. “They are not your average college students who just graduated with degrees in finance, business management or international relations.”

These four second lieutenants have already exhibited leadership capabilities, according to Wynn, serving as a battalion commander, an executive officer, company commander and staff officers.

Kirchgessner offered a set of seven for expectation management, first noting that everyone has an opinion. Though he said there was a benefit in listening to the opinions of others, he charged those before him to never accept them at face value.

“Consider your opinion. Continue to gather facts and ultimately develop your own opinions,” Kirchgessner said. “You will be held responsible for your decisions, so be deliberate in how you come to those decisions.”

Second, Kirchgessner stressed the difference between words and actions, charging the cadets to care for their soldiers. Third was the value of a team.

“No soldier is ever going to rise to success on their own. No unit can ever accomplish their mission without operating as a team,” Kirchgessner said. “As important as it is to be a team player, it is also crucial to understand the teams that you are on.”

Kirchgessner named the fourth pillar “you are who you are,” and he explained the importance of self-awareness. He said if someone tries to be anybody but themself, they will lose all credibility.

For Kirchgessner, the awareness that not everyone has the same interests, ideas and opinions is crucial. He charged the group to be “chameleons to the needs of your soldiers.”

His sixth pillar defined adaptability as a necessary quality in a leader.

“The most important title you carry in his career is soldier. Second most important is professional,” Kirchgessner said. “No job or rank in our army will ever carry more weight than the fundamental truth that you are a professional soldier. Like any professional, commit yourself to mastering your craft every day.”

Service in the army is no easy feat, according to Kirchgessner, who said lastly, family is above all else. Family, as defined by Kirchgessner, does not just encompass blood relatives.

“Whether you serve four years or 40 years, your time in the army will come to an end,” Kirchgessner said. “When that time comes, there will not be any holiday card or wedding invitations from Uncle Sam. We’re families for life.”

Kirchgessner said military life is a life of sacrifice — not just for those in the service, but for their families too.