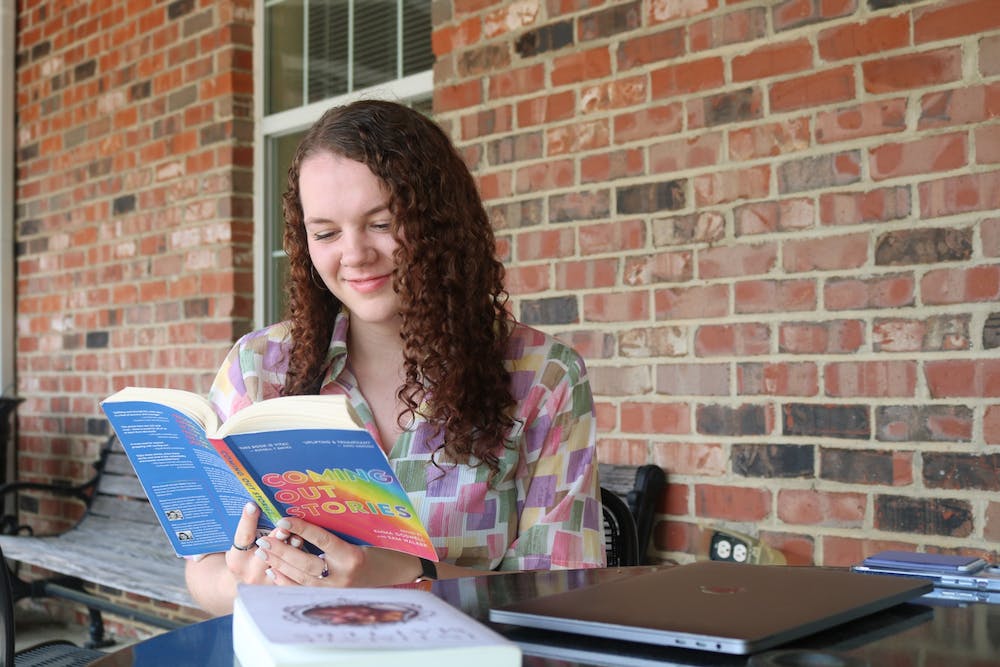 Photo by Samantha Sussman | Elon News Network
Senior Melissa Sturtz a book on the coming out stories of those in LGBTQIA+ communities. Sturtz completed undergraduate research on the correlation between authenticity and sexual orientation in young adults.

For senior Ailene Woznicki, Elon University has provided her with an outlet to be more confident in her identity and opportunities to experiment with who she is.

“I grew up in a very Catholic, conservative community and didn’t really have that opportunity,” Woznicki said. “Even just physically expressing my appearance differently has been a fun thing for me — like trying out new styles, and doing different things, and dating different people and not really having the expectations put on me, and that’s been really great.”

But Woznicki said she is worried by the recent surge in anti-LGBTQIA+ legislation across the U.S. Her concerns extend to the possible effects the legislation could have on future college students in situations similar to hers.

Over 200 anti-LGBTQIA+ bills have been introduced across almost 40 states in 2022 so far, according to the LGBTQIA+ rights group Freedom For All Americans. One highly publicized example is Florida’s HB 1557 — commonly called the “Don’t Say Gay” bill — which was passed in late March by Gov. Ron DeSantis. The bill censors language in schools on gender identity and sexual orientation from kindergarten to third grade.

While this bill does not directly address higher education, Woznicki fears that if students are not educated on sexual orientation early on in their development, the impact will ultimately be felt in college settings.

“One of the key things in order to encourage accepting difference, and to realize that there is difference in general, is early education,” Woznicki said. “You have the ability to explore your identity, and you have the ability to think about these kinds of things. If you never hear that, you don’t really feel like the opportunity is ever there. And that really affects your whole identity development.”

Senior Melissa Sturtz recently completed undergraduate research on the correlation between individual’s sexual orientation and their sense of personal authenticity. She found that in adolescence — the average stage in which people discover same sex attraction — authenticity levels drop. But around 20 years old — the average age of coming out — authenticity levels begin to rise again, correlating with a typical college timeline.

While Sturtz didn’t specifically look at the Don’t Say Gay bill, a theme that arose in her research and interviews was normalized homophobia, which she thinks encompasses the legislation. She said 71% of people whose coming out stories she studied discussed normalized homophobia and how it impacts their ability to be themselves.

But Sturtz also believes sexual orientation will always be inherent in discussions, no matter how the legislation attempts to bar the topic from schools.

Of the 355 students who responded to the survey for the 2022 Preliminary Report at Elon University, 68% identified as heterosexual, 15% as bisexual, 4% as queer, 3% as lesbian, 3% as asexual, 1% as gay and 1% as pansexual. Additionally, 3% of respondents said they preferred not to say, and another 3% were unsure or questioning.

While the survey was only comprised of 355 voluntary participants out of the 7,127 total students at Elon University, according to the data, 30% of Elon’s population are members of the LGBTQIA+ communities.

Woznicki said while she mostly feels comfortable being out at Elon, there are some aspects of campus life that can make her or other students feel excluded, such as not being able to wear her girlfriend’s sorority’s letters while many other women wear their boyfriend’s fraternity’s sweatshirts.

“I think that people don’t recognize the privilege that they have being in heterosexual, cisgender relationships,” Woznicki said. “The looks you get on campus walking around, and also Elon in general as a town. I think there’s been those people who drive by in trucks and honk at protests and events that we have — all that kind of thing. That doesn’t make campus feel super safe, I’m sure, for a lot of people.”

Woznicki works as a student assistant for Elon’s Gender and LGBTQIA Center and said she and other staff members are always there to talk to members of the communities and provide resources to help students, such as helping them to move rooms because of gender-based issues.

Emily, an Elon student who requested to keep her name anonymous, said she has attended a couple of events hosted by the GLC and thinks it has good resources. However, she said she doesn’t necessarily feel the need to go.

“I wouldn’t not go, I just don’t have it on my priorities,” she said. “Because again, yes, it’s an identity of mine. But also, it’s not something that I’m just saying.”

Emily said she has felt comfortable and accepted by peers on campus, which has been a welcome change of pace from her hometown, where she does not feel safe publicly embracing her identity.

“I came from a kind of judgy, everyone’s all up in your business kind of town. And then when I came here, some of it is still very much like that … but I think I realized here that it’s OK, I could like be my weird self, which includes all of the different identities that I have,” Emily said. “I definitely think there is inclusion here on campus in that regard, especially with the LGBTQ+ community because you see same-sex partners holding hands on campus so it’s definitely not against it.”

For seven consecutive years, Elon has ranked among the “Top 30 Best of the Best LGBTQ-Friendly Universities in U.S.” by Campus Pride, a nonprofit organization that helps create safer environments for LGBTQIA+ communities on college campuses.

Sturtz said she was surprised by Elon’s Pride Index being rated five out of five stars by Campus Pride, but as a senior, she said she has seen an increase in LGBTQIA+ representation throughout her time on campus and thinks the Pride Index is accurate.

“I think it kind of ties back into the representation part of when you see people like wearing crazy earrings and dyeing their hair, you’re inspired by like, ‘Oh, I can do that too,’” Sturtz said. “I feel like as I became more accepting of myself, my own identity and then also coming out, I just feel more authentic. I’m more able to express who my true self is.”