Elon Chabad welcomed Nathan Spiewak, one of the last survivors of his generation, to speak 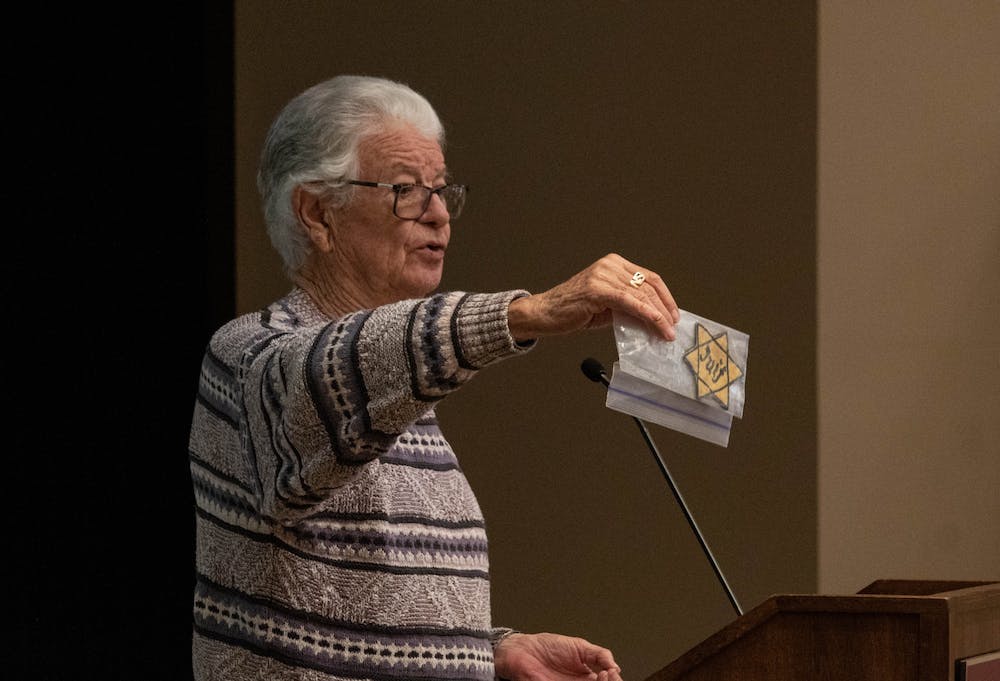 Photo by Joseph Navin | Elon News Network
Holocaust and World War II survivor Nate Spiewak holds up his yellow star that he had to wear. This was part of an event held by Chabad Elon and Elon Hillel along with other organizations inside of McKinnon Hall on March 30.

Over 150 people gathered in McKinnon Hall to hear the story of 80-year-old Holocaust survivor Nathan Spiewak, who is one of the last of his generation.

The event was organized by Elon Chabad, and Spievak and his family flew in from California to speak. Though Spiewak himself was never in a concentration camp, he was an escapee of Velodrome D’Hive in France, the largest roundup of French Jews.

Adina said it meant so much to her to bring his story to the Elon community. According to Elon’s Registrar’s Reports for Fall 2021 and Spring 2022, this year’s student body is about 6.8% Jewish. She said with Elon’s student body’s small Jewish population, she feels it is important for people who don’t get to hear stories about the Holocaust as often to hear more perspectives.

“It is so crucial to remember the Holocaust and make sure that the stories are shared for generations,” Adina said. “My kids are probably not gonna know him personally, but I will make sure that they know him through videos. I'm always taking Snapchats of him with the funny filters.”

Spiewak began his speech by discussing people who believe the Holocaust didn’t exist.

“Why was I separated from my mother and father for over three years while they were at different concentration camps?” Spiewak said.

He shared moments of fear when he couldn’t sleep at night. But the speech was not all gloomy. Spiewak included wit and positive humor, which had the crowd smiling and laughing as he recalled moments as a little boy.

“I had a miserable time in Catholic school,” Spiewak said. “I had to confess my sins – I seemed to have a lot of sins.”

Spiewak said he was lucky to have his cousins by his side throughout the hard days.

Spiewak grew emotional when talking about his reunion with his parents. His father returned injured, and he recalled one moment from the hospital with his father when people were expressing their sympathy.

“They would offer us money, as if money were enough to take back the suffering and the pain,” Spiewak said.

Spiewak has been interviewed about his story before, including for Stephen Spielberg’s documentary. He shares with the audience that his interview for that lasted four hours.

Rabbi Mendy Menkowitz said he was humbled that Elon Chabad was able to organize the event.

“Holocaust survivors are fewer every day and to be able to bring someone down, especially from as far as he came from California, it's a huge privilege that we had and we don't take it lightly,” Minkowitz said. “Especially having had such a huge turnout, you know, the room was full, it was beautiful.”

Freshman Eden Cooperman was so moved that she spoke up at the event during the question and answer portion.

“For a long time, I didn't want to be Jewish or say that I was because not that I was ashamed, but I, I felt that it was just easier,” Cooperman said. “I just wanted to say that people like you are the reason that I'm proud to say that I am.”