Students walk through their processes of choreographing 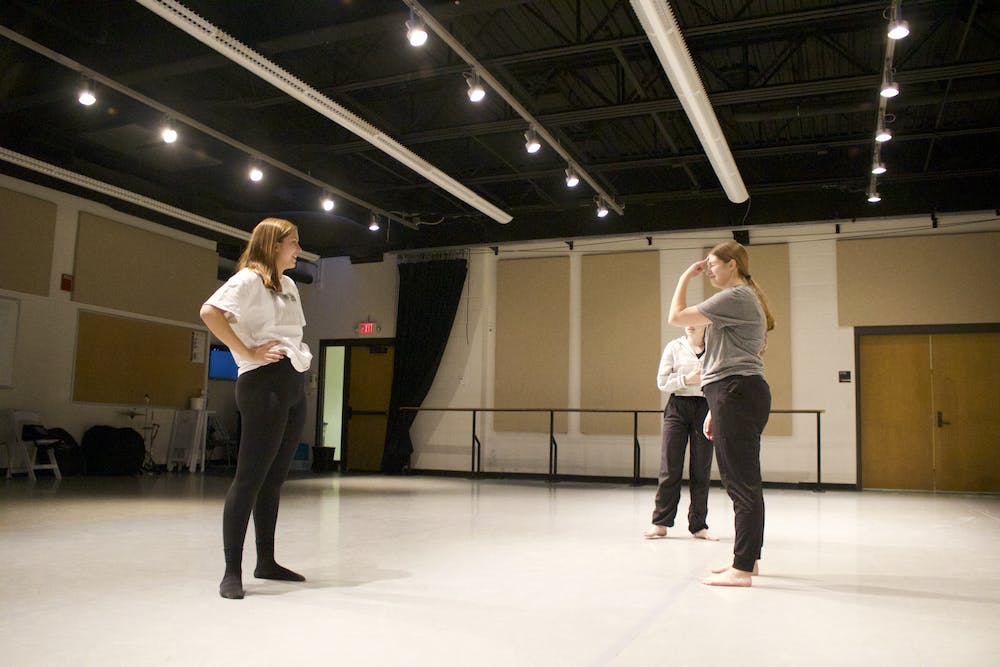 When it comes to choreography, it’s all about the group mindset rather than the individual’s — at least for senior Amy Moore. Choreographing reflects on how movement looks on someone else’s body rather than your own.

The art of choreography is something that Moore said she has grown to love. One way she’s able to expand her opportunities in dance is through Dance Works — an organization for students to learn dances and choreograph.

Serving as the president for Dance Works, Moore said she gets her inspiration from music when she is choreographing. As part of her process, she has a playlist filled with songs and shuffles it until she finds the right one.

“It turns into a lot of visualizing in your head and then seeing how can I put that on my body?” Moore said.

When deciding who to cast in her piece, Moore said she looks for people who dance similarly to her because it’s easier to choreograph for them as she can visualize herself dancing.

“I want to be able to visualize it on those people, on their bodies, because I want them to look good doing that choreo,” Moore said. “I don’t want to choreograph it on myself, and then I give it to them, and they’re like, ‘Yeah, this doesn’t work,’ because that makes the process much more difficult.”

Reincorporating physical interactions this year has also proved to be a new problem because of last year’s COVID-19 restrictions. Now, Moore has tried to incorporate more touch and partner work between dancers.

Freshman Kelsi Sheren works in the same way and finds a song to choreograph to rather than looking for a specific song to match the choreography.

“I usually get inspired by a piece of music first and kind of come up with a concept from there and then choreograph based off the music,” Sheren said. “I think some of the best pieces, the music inspires the choreography and the dancers first.”

Sheren said she knows the dancer’s strengths that she works with and tries to incorporate that, but she wants to challenge them too.

“I want to make something different and unique, but I also want to make sure I’m working to my dancers’ best capabilities, but also challenging them at the same time. So it’s kind of like a big mosh pot of things,” Sheren said. “There’s a section of my piece that’s 20 seconds of very intricate, fast-paced movement. I know a lot of people don’t move that way, but I do, and I think that’s a section of my piece that’s a challenge part.”

Growing up, Sheren danced in a studio that encouraged improvisation and individuality, which translates into the choreography she does today.

“I think having that background that nurtures choreography and allows you to have an expressive voice is really what pushed me toward there,” Sheren said. “I love improvising and grooving whenever, so from there I find the way that I moved and what’s most comfortable for me.”

Sheren dipped her toes into choreographing before Dance Works by substituting as a teacher in her dance studio for young girls.

As a math major, Moore said she participates in Dance Works and minors in dance because she loves it. She started auditioning to choreograph a piece in the showcase freshman year and has choreographed a dance for the show every year since.

“We have quite a few people in the club who just are doing it because they really love to do it,” Moore said. “That’s such a valuable part of the club that you get all those different people who have those different experiences because you get a really broad mix of all the dancers coming together.”