Leland Melvin spoke about overcoming adversity, relying on help from others 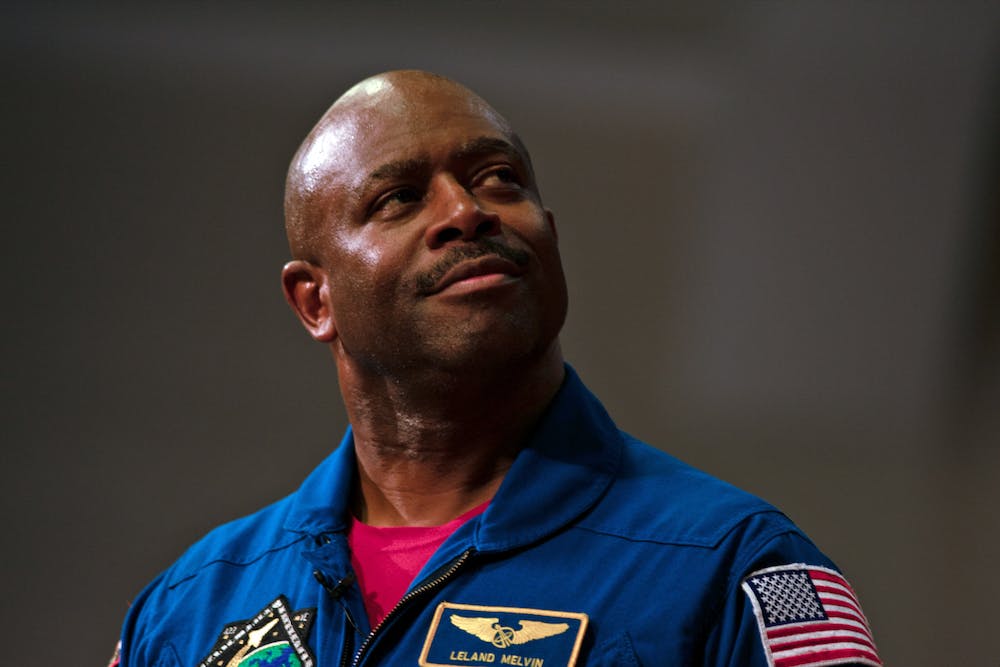 When Leland Melvin was 8 years old, his mom gave him a chemistry set — igniting his passion for both science and experiential learning.

Melvin, former NASA astronaut and NFL wide receiver, gave Elon University’s Baird lecture on March 31. In 1986, Melvin joined the NFL and was selected by the Detroit Lions during the NFL college draft. Throughout his time in the NFL, he was a graduate student at the University of Virginia, where he earned a Master of Science degree in materials science engineering. Later that same year he began working for NASA. A hamstring injury later in 1986 ended his NFL career.

Melvin said growing up, he took advantage of the second chances he was given — starting when he was a high school football player and missed a touchdown pass during a game with a University of Richmond scout present.

“He walked out of the stadium when I dropped the first pass,” Melvin said. “He heard the crowd screaming the second time he walked back in and saw me in the end zone doing a dance. He said if this guy can overcome such horrific failure and not give up, I’m going to give him a scholarship. One catch resulted in a 180,000 dollar scholarship for the University of Richmond.”

This pattern of not giving up after adversity continued for Melvin, and he relied on people in his life to help him through such adversity. He considered these people to be his “Man in the Yellow Hat,” like in Curious George.

“No matter what trouble he had, he always had the man in the yellow hat to get him out of trouble,” Melvin said. "And students of Elon, make sure as you go through this journey that you have that man or woman in the health hat that will always have your back. I've had those people throughout my life that have kept me on the right path.”

In order to simulate space walks, which is any time an astronaut is in space outside of a spacecraft. Melvin practiced at the space station which is submerged in water. During one of these practices, Melvin said his equipment was not correctly attached and he was unable to unclog his ear once he was submerged in water.

“They take my helmet off and the doctor, the flight surgeon, starts walking towards me and he gets close to me. He takes his right hand and touches my ear,” Melvin said. “He pulls his finger back and there's a river of blood flowing down the side of my face. I am completely deaf.”

Due to this, Melvin was not medically cleared to go to space and spent weeks in the hospital recovering. Daniel Goldman, who worked for NASA and was in charge of the Hubble space telescope, visited him in the hospital and became his “Man in the Yellow Hat” — according to Melvin.

Soon after Melvin was released from the hospital in 2003, the Columbia — a space shuttle many of Melvin’s friends were on — was scheduled to return to Earth. When entering Earth, the Columbia disintegrated upon arrival, killing all seven passengers.

“I was driving on highway 66 out of D.C. and I got a phone call from my boss,” Melvin said. “She said, ‘What does it mean when the space show countdown clock is now counting up? … I did an illegal U turn on 66 and drove back to D.C. because I knew that all my friends were gone.”

Melvin said the next day he went to console his friend David Brown’s parents, who was on the Columbia.

“His father says to me with tears in his eyes,’” Melvin said. “‘There is nothing you can do to bring him back but the biggest tragedy would be if we don't continue to find space to honor the legacy.’”

Melvin said soon after this incident Goldman gave him a medical waiver to fly — not because he had fully regained his hearing, but because he knew he had the determination necessary to be a successful astronaut.