Main Street Vinyl rocks into their sixth year in Burlington 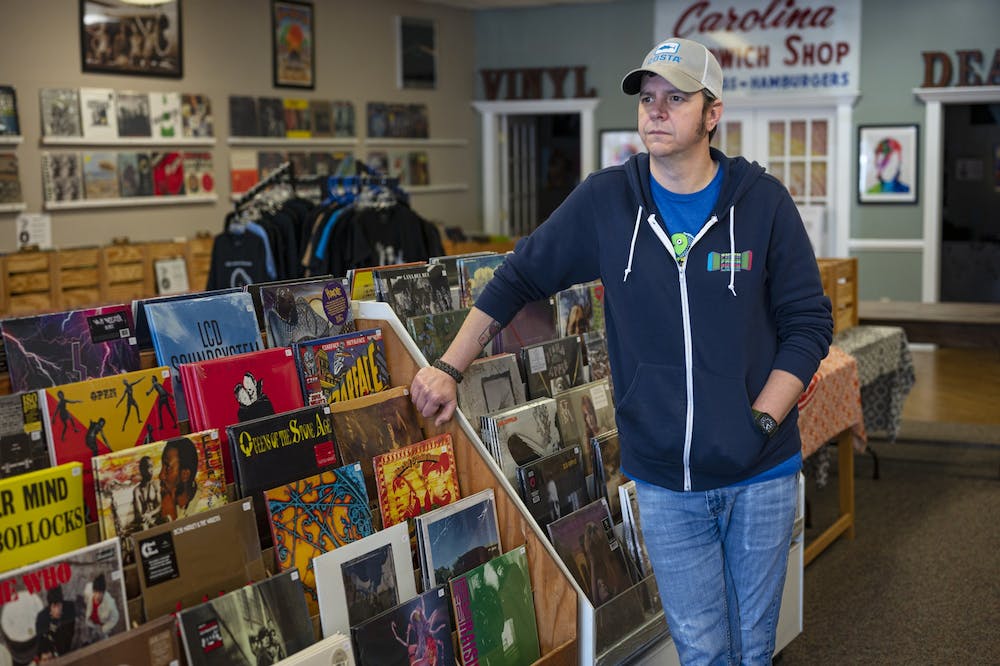 
Joshua Garrett, owner of Main Street Vinyl in Burlington, NC stands in front a rack of records just after opening his shop at 12 p.m. on Mar. 1, 2022.

Located in downtown Burlington, Main Street Vinyl is an independently owned record store co-owned by Garrett and his fiancée, Amy McLamb. The store carries a wide range of music genres from trendy pop music to old jazz hits, Garrett said, to cater to a large and diverse customer base.

According to Garrett, the shop not only offers a variety of old records customers can listen to and purchase, but also a throwback experience, as many of their products are from classic musicians, like Elvis. Garrett mainly stocks the shelves with old records that have been bought either from customers or from other record and donation stores such as Salvation Army or Goodwill.

“We sell nostalgia, that is the name of the game,” Garett said. “We take people back to that time and place.”

Vinyl sales have increased across the nation since 2020 — a 51.4% increase in vinyl sales with 27.5 million records sold in 2020 and 41.7 million records sold in 2021, according to Billboard's 2021 end-of-year report. Garrett said he believes the increase has to do with the music industry focusing on digital markets, which lack a tangible product as proof of listening to music.

“The music industry had gotten so cold and so impersonal that I think a lot of people rejected that. They’re like, ‘I'm not okay with that. I want to go to a physical shop and buy physical music,’” Garrett said.

An Elon native, sophomore Krissy Bell has visited Main Street Vinyl multiple times and said Garrett is always there to give recommendations and talk about the current news in the vinyl record industry. Bell received her first record player in 10th grade and has been collecting vinyls ever since.

“He's really knowledgeable about business,” Bell said. “We've had full on conversations about the revitalization of records and how that works.”

Bell said that she believes listening to vinyls is the right way to listen to music, and that listening to tunes through a phone doesn’t give the same experience.

“It's just nice to be a part of something that other people pass on and be part of,” Bell said.

Because of the COVID-19 pandemic, Garrett said the shop has faced some supply chain issues. Some of this has to do with the new artist albums today, such as Adele’s “30,” and the demand for new records over old ones.

“Supply issues have been really hard on us because it's made it difficult to keep my new selection stocked with what I always like to have,” Garrett said. “So I'm kind of at the mercy of the distributors, who are also at the mercy of the pressing facilities.”

One of the things that makes the vinyl shop special is its customer base. Garrett said the Main Street Vinyl has a diverse customer base day where each day brings in someone new. Sometimes he sees a kid come in to find a record for their siblings birthday, while other days he sees vinyl record enthusiasts coming in looking for original records from when they were kids.

The only challenge Garrett has found with the variety in costumers is making sure everyone's music taste is accommodated. As he continues to run the shop, he hopes to provide to everyone's needs and wants.

“I want to scratch that itch for everybody,” Garrett said. “I want anybody, anybody to be able to walk in off the street and find something in here that they want, that they love.”