Voting for Elon’s Student Government Association begins today and out of the 44 open positions, there are 18 races, two of which are contested 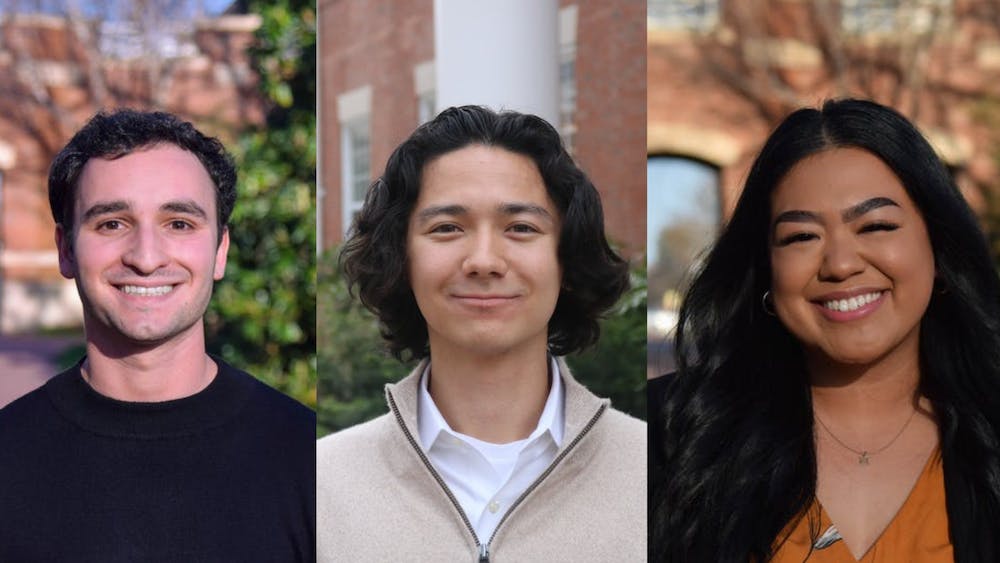 Chase Solomon, Andrew Lymm and Nadine Jose are all running for the position of executive or student body president. Their race is one of few contested SGA races this year.

Updated as of March 28, 2022 at 9:44 p.m. to include additional information regarding student president candidates.

Out of 44 seats available and 18 races for SGA, there are two contested races this spring. Last year, out of the 38 SGA elected positions, there were four vacancies and 12 uncontested positions.

Out of the 44 seats on SGA, the Student Body President’s position is just one of two that are contested.

Lymm is from Middletown, Connecticut. He’s served on SGA for the past two years. Lymm said the recent reconstruction of the SGA constitution gives him a chance to make the organization more accessible to students.

“This is an opportunity for us to wipe the slate clean, and make sure that we are being communicative across the entirety of Elon and then making sure that we are actually advocating for the issues for the people that we represent,” Lymm said.

Lymm said he is ready to devote all his time to the position, something he thinks was missing from previous executive presidents.

“If you've taken a look at a lot of past presidents, they're seniors that have been loaded down with a lot of work,” Lymm said. “They're looking to graduate, some of them doing independent research, all this stuff, and it kind of takes away a little bit from them being able to do their job 110% effectively.”

Jose is from Freehold, New Jersey. This year she served as the school of communications senator and as a campus programs senator the year before. She said she’s been uplifted by the support from her peers on campus who view her as a historic candidate.

“Since our student body is predominantly female, just looking at the record of the last four presidents we've had, they've all been men, two of whom have been named Jack, and three of whom have been white men,” Jose said. “I think it genuinely is a time for a little bit of change at Elon, and I think I'm the right person for it.”

“There are small things that senior staff can ameliorate or to help aid like eliminating those disparities or at least minimizing them,” Jose said. “One thing that I really care about is really having free laundry for everyone.”

Solomon is from Columbia, Maryland. He has served as the class of 2023 president for two years and was his freshman class senator. Solomon said his top priority is inclusivity on campus, which starts with SGA funds.

“While our campus might appear beautiful, there are certainly some adjustments, adjustments that can be made … we have elevators in every building, we have walkways whenever we do, but we have to be realistic in terms of how exactly we allocate our money,” Solomon said. “We have to be asking those questions because it's extremely important to include everyone and that includes people with disabilities on campus.

Solomon said he believes he is the best candidate for the student body because he will lead with empathy.

“I think that in order to really connect with someone in order to make meaningful change, you need to first have a genuine connection with them and touch their heart,” Solomon said.

All three candidates said their goal if elected is to improve communication between SGA and the student body.

This year, SGA is changing the structure of the senate. Part of the reason for this is to have greater representation, according to Love School of Business Senator Trevor Molin. This past term, the student government included 51 positions. 38 are elected offices, leaving the remaining 13 positions to be appointed by the president.

The new structure for the upcoming term will have 44 total positions – all elected. Eight of these positions will be filled in the fall by the class of 2026.

Molin said the goal is to have more positions filled by voting, though he recognized this doesn’t change the pattern of vacant and uncontested positions.

“In the past, it was always over 10 people being appointed, so we wanted more people to actually be elected by votes,” Molin said. “Some people raised the issue … saying, ‘We already have unfilled seats, what's this going to do?’”

Molin said having uncontested positions hurts SGA and the student body they represent. Because of this, he feels it is SGA’s responsibility to get more people to run for positions.

“I ran unopposed my first two years and that definitely affected how I campaigned — it didn’t make me campaign really,” Molin said. “I ran opposed last year for executive vice president and that was such a different experience … I think it made my ideas better and it made me as a candidate a lot better.”

Current Student Body President Jack Corby said he thinks people don’t run for SGA because they don’t understand what goes into the role, which is something he hopes the new model can help fix by having positions that have more well defined roles.

“I hope the new model in SGA will really work with students … so everyone feels a lot more included and represented through SGA,” Corby said. “There's a healthy number of students on campus right now that don't really know what we do just because we're not reaching them, and that is part of the reason this new model is being phased out.”

Madison Holmes, election chair and class of 2022 senator, agreed that part of the reason people don’t run for SGA is because they don’t know what they do.

“We've had info sessions on what SGA is, and unfortunately, those info sessions aren't really heavily attended as we would like it to be,” Holmes said.

Molin also hopes in the future with an updated structure SGA is able to have a larger impact on the student body, as he says this would help both with students knowing what SGA does, but help to make SGA a more meaningful organization. In this updated structure SGA will have more people that are not senators, such as the cabinet and judicial branch, making it so more things will occur outside of their weekly meetings. In the new model, cabinet meetings and the Chief and Associate Justices will meet outside of senate meetings, which Molin says will help decisions happen faster.

“One of my biggest issues with SGA generally is that we've just been relegated to people with money and I want to do more than that,” Molin said. “We have to decide things as a body every Thursday … that can make us move really slowly sometimes.”

Corby said having vacancies that are filled by appointment is an issue, as these positions are still getting filled, but he said he understands the importance of competitive elections and in the future hopes there are more people running.

“People deserve to have the best people representing them, whatever that means to whoever's voting,” Corby said. “But giving people options means that they get to elect the better person to represent them.”

Voting ends tomorrow at 5 p.m. and students can cast their vote on Phoenix Connect. All students are eligible to vote, including seniors and those studying abroad. The results of the election are set to be announced live at 6 p.m. outside Lakeside Dining Hall tomorrow.