Leading up to and following the events of Jan. 6, increased polarization has changed the political climate, Professor Ladd said 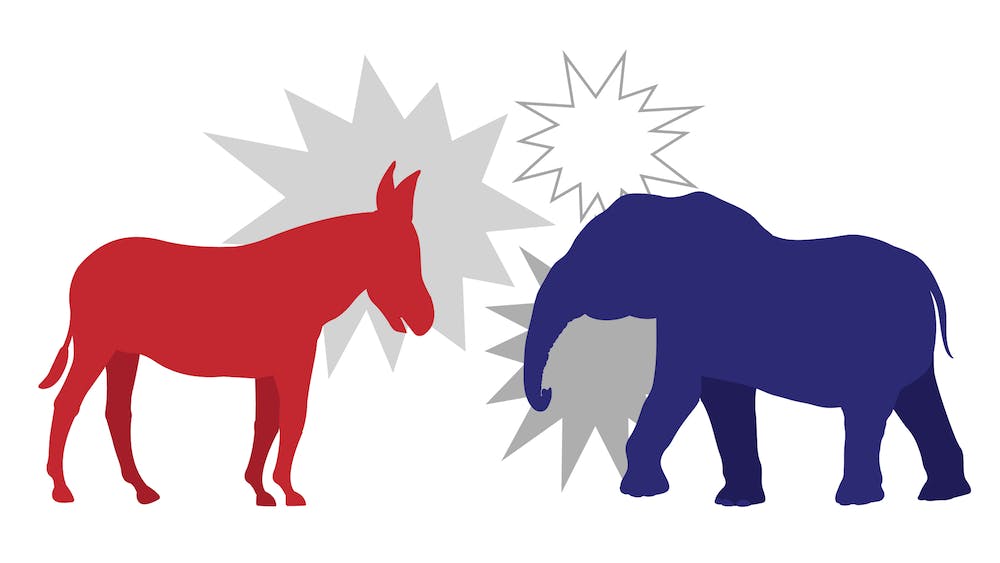 Photo by Caroline Mitchell | Elon News Network
According to the Pew Research Center, in a 2014 study, the overall share of Americans who express consistently conservative or liberal opinions has doubled over the past two decades.

Correction: A previous version of this article stated Professor Ladd was a politics editor. She was a politics reporter. Elon News Network regrets this error.

Political polarization has increased in recent years, particularly leading up to the Jan. 6, 2021, riots. According to the Pew Research Center, in a 2014 study, the overall share of Americans who express consistently conservative or liberal opinions has doubled over the past two decades.

Journalism professor Susan Ladd talked about the state of political polarization in the United States. Ladd worked at the News and Record in Greensboro for 34 years in many roles, most notably as a politics reporter and news columnist before she began working as a professor.

As a politics editor, have you noticed an increase in political polarization?

“Yes, absolutely. It was a very noticeable thing and I really believe that the source of it is the fracturing of the news media that we were also seeing at the time. When I say the fracturing of the news media, it includes newspapers are declining in circulation because people are going to online sites and the consolidation as bigger companies started buying up newspapers. As that's going on, people are abandoning traditional media sources, and either going to online sites or cable news networks to a large degree. The problem there was that one of the things that happened is that the cable news networks really started blurring the line between news and commentary. I'm not sure people understood when they were watching a new show, and when they were watching one that was commentary. The lines got really blurred. The online news organizations were sometimes not that reliable. The ones that were independent, sometimes were great, but frequently had a particular political slant that permeated the way they did things and there was a range there from some that were a bit slanted to those that were publishing propaganda and misinformation. As people lost their traditional sources of news, and went to these other outlets, what they tended to do was,  find one that aligned with the political beliefs they already had. It just made people less and less inclined to listen to other perspectives.

The thing about newspapers traditionally had featured a range of opinions. People were exposed to other opinions, but on a lot of these cable shows, they come from one political perspective. This is true of both sides liberal and conservative they each have their own cable news shows that are very much representing a polarized political point of view.

What happens in communications, we call this confirmation bias, people tend to believe the things that confirm what they already believe. They tend to accept what confirms their pre-existing beliefs and reject things that contradict their current beliefs. The polarization gets worse and worse. The fracturing of the news media had a lot to do with that and you could see it start to happen. Particularly, starting in the second Obama administration, and leading up to the Trump elections, it just got more and more extreme. The other problem with that is that people stopped believing facts.

This is not just a difference of opinion. This is way more fundamental than that, and it's a lot scarier. This is an inability to agree on what the facts actually are and that puts a country in very serious danger when people start rejecting the facts, where do you start? How do you start trying to come to any kind of understanding with people if you can't agree on the basic facts?”

Do you think that this then also led to the actual events of January 6?

“When people can't accept or agree on what the facts are, they are very easily led into extreme behavior. It is an incredibly dangerous thing for democracy when you can agree on what the facts are, then you get the Jan. 6 insurrection. When people can't trust facts anymore they tend to just follow what they want to believe. When you get a charismatic leader who can put people's emotions up to act on something like that, that leads to things like Jan. 6.

There is no evidence that the election was ‘stolen.’ Courts looked at this, there were numerous court reviews of voting records in various states. There were assertions of election irregularities. Literally, there's no proof that any of this actually happened, but people were willing to believe it nonetheless, to the extent that they were willing to overturn the US government. That's disturbing.”

Looking at after January 6, how do you think that that event has impacted polarization in general?

“I was very hopeful after it happened because even very strident Republicans were willing to say this was wrong and say this action was terrible and was not warranted. And in many cases, it meant that the election wasn't stolen, that there wasn't widespread election fraud. In the first hours after it happened, a lot of powerful Republicans did that.

But within 24 hours, they also started defending it, that the election was stolen, and that Jan. 6 was a peaceful protest, and things that just are patently false. We're in a situation where we have leadership of a political party that is willing to use propaganda and false information to inflame the public so they can be reelected. In most cases, most of them are doing it to ensure the allegiance of Donald Trump because they believe that he still has sway of voters. It's very worrisome.

The words on paper don't make a democracy if people don't follow them. It takes the commitment and belief actions of a whole citizenry of a country to make democracy work and to be committed to that ideal. I found it very disturbing.

One of the things that I noticed as a reporter covering politics in 2014, 2015, 2016 was how quickly we went from, ‘I disagree with you’ to ‘I hate you’ and this was really reflected in the kinds of reader feedback that we got when we were doing political coverage. We weren't talking about ideas anymore as much as people were talking about you're a bad person. That's a very significant difference. The level of vitriol that would come that I got over the phone with people literally changed from the day before Trump's election to the day after.”

People were saying these things to you about you?

“Yes, I was writing columns so I was writing opinion based journalism. I actually had people who’d regularly call to argue with me about whatever I've written, and most of the time it remained very civil.

But one of our regular callers left a voicemail on my phone, the day after the election after Trump was elected, that contained veiled threats and used the language that this person had never used before. It was very disturbing. They felt empowered to be able to respond in that way because of Trump’s victory. He made it OK for a lot of people to name-call and threaten violence, that came through even from our own readers.”

“We all are influenced by the opinions of our families in our community. Elon students come from many different diverse types of backgrounds and communities. To some extent, we all come preloaded with ideas and that's fine. College should be a time when you start questioning and interrogating your own beliefs, testing them against reality, right. Young people tend to be more open to questioning and reconsidering things and my general sense is that most students are willing to listen to the ideas of others. For some, it is the first time they have really been exposed to being around people whose political beliefs may be pretty different from the earth. The key is to talk about it in ways that allow people to be heard, without being condemned, and to ask good questions on both sides. When we stop trying to talk about ideas, and just start calling each other names, there's just nowhere to go from there.

It's not a coincidence that the first thing I tell students in my media writing classes is ‘I want you to learn to be a critical thinker.’ Critical thinking is all about going back to the facts too, and let that be a starting point.

I would say I really do place a lot of faith in the younger generation and a lot of hope, that they will be the generation to pull back from this extreme polarization and demonizing each other and to be able to, again, have healthy discussions about ideas that are based in fact. That's my hope. Young people tend to have much more open minds, so somebody's got to change it. We've gone so far past where I thought we would ever go as a country.”