The School of Health Sciences is undergoing four phases of renovations in order to add cutting edge technology, lab space as well as new common, classroom and office space 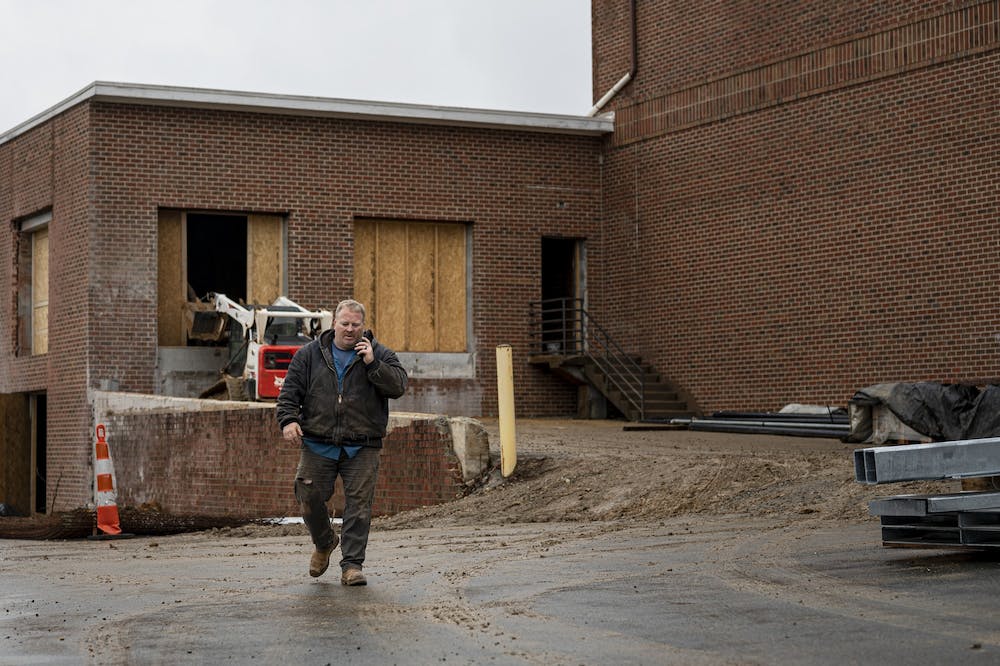 Photo by Luke Johnson | Elon News Network
Mitchell Harrel walks while on the phone from the construction site at the Francis Center on Feb. 7, 2022, at Elon University as the construction crew begins to clean up from a days work in muddy conditions.

Also known as the Francis Center, the building — located at 762 E. Haggard Ave. — is scheduled to undergo four separate phases of renovations in tandem with Elon’s health science programs expansion.

According to the Dean of the School of Health Sciences Becky Neiduski, the school’s renovations are predicted to be complete by fall 2023. Following the creation of the nursing program in fall 2021, the additions of the accelerated and four-year traditional Bachelor of Science in Nursing programs will grow the School of Health Sciences to grow from approximately 220 physical therapy and physician assistant studies students, to a combined total of over 600 students in the physician's assistant, physical therapy and nursing programs, according to Neiduski.

“They've changed the way we think about healthcare education in the School of Health Sciences, and that will have benefits not only for our students today, but for our students of the future as well as healthcare providers from our community,” Neiduski said.

Since opening in January 2012, Neiduski said the Francis Center property was never completely renovated, which left room for the school to continue expanding. This also means construction is not starting from scratch, as they are working with pre-built structures. After all renovation phases are complete, the square footage of usable space will have doubled from its original 50,000 square footage to 100,000 square feet, said Neiduski.

The first phase, started in fall 2020 and completed in spring 2021, centered around kicking off Elon’s nursing program in fall 2021, as well as the Interprofessional Simulation Center — a space for health science students to train with real people hired to act as patients.

As of January 2022, Neiduski said the nursing program has three full-time faculty, a department chair and a program assistant. She also said they will be hiring three additional faculty in fall of 2022.

Neiduski said the School of Health Sciences is also working on adding a Bachelor of Science in Nursing completion program, as well as a master's level program in nursing.

The school is currently in phase two of renovations, which began in fall 2021 and is expected to finish in April 2022. The total cost of construction is estimated to be $3,392,700, according to the remodeling’s commercial permit issued by the Alamance County Inspections Department.

According to Neiduski, phase two renovations will add an Anatomical Gift Program Memorial garden on the side of the building, as well as another entrance into the building through the garden so students and faculty can walk through it on their way into the building.

In fall 2021, the Golden LEAF Foundation provided Elon with a $100,000 grant in order to help pay for an augmented reality, virtual reality and mixed reality lab.

“I might put you at the scene of an accident on the side of the highway, I may put you in an emergency room or in a surgery or maybe I'll even put you in the human heart,” Neiduski said. “You will actually be immersed … the Golden Leaf grant has helped us access the technology we need to make that a reality, and we intend to not only educate our students, but also healthcare providers from the community.”

Freshman Sophia Tiago is a part of the nursing program’s first cohort. According to Tiago, she was told about the Francis Center’s renovations in her Nursing Healthcare Relationships class. Although she said she does not currently have any classes in the building, Tiago said the freshmen nursing class will transition there next academic year.

“Especially being the first cohort of nursing students, I'm really excited to be able to get the opportunity to have new learning experiences and actually be able to use all the equipment that they have,” Tiago said.

Both Tiago and Neiduski said they are excited to see the expansion of the health science school.

“I think it's great. We were talking during our class a couple days ago about how there's already so many new nursing applications,” Tiago said. “It's crazy how small it was at first … and how big it got over just like not even a full year. It's been a semester and a half, almost.”

Phase three is scheduled to occur during the 2022-23 academic year — with phase four being scheduled for the summer of 2023.

Phase three focuses primarily on the two-story space located in back of the Francis Center. After completion, the space will include a skills lab where students will learn how to do anything from moving a patient, to taking vital signs to working with a patient at their bedside, according to Neiduski.

“It's been absolutely an amazing experience, to not only learn, but also to collaborate and really think about the ways that we can advance engaged learning and create incredible learning spaces for our students,” Neiduski said.