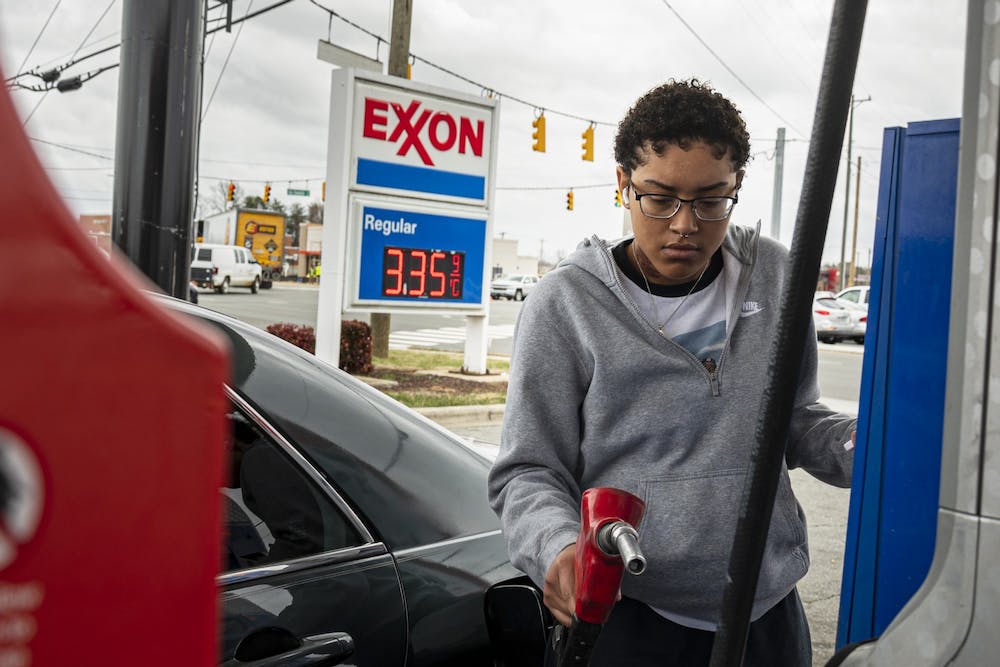 
Jasmine Scotton fills her car with gas at the Exxon gas station Burlington on Feb. 22. Inflation is on the rise and as a result so are gas prices, which Alamance county residents are starting to feel at the pump.

Interest rates, gas prices and a high demand for home building. For Tonmoy Islam, professor of economics at Elon University, these are all casualties of the current state of inflation in the United States. Increased gas costs and home prices in Alamance County are following trends throughout the country, and that’s because inflation is more than just a regional issue.

According to the U.S. Bureau of Labor Statistics’ Consumer Price Index, which represents the value of the U.S. dollar against the price of various products to judge inflation, a dollar in January this year is worth 7.5 cents less than that of 2021, putting inflation at a current rate of around 7.5%. But this number isn’t wholly representative of Alamance’s price increases, Islam said.

“With inflation, officially it's just one number for the whole country, which does not make sense, because the cost of living in New York is very different from the cost of living here and in Burlington and Elon. And the price increases are also different,” Islam said. “But inflation, the number at least gives us some idea that overall prices are going up.”

Though the national inflation rate isn’t specific to Alamance County, the effect it has on commodities nationwide is still reflected locally.

“Price increases will be similar across the nation,” Islam said. “So, California gas prices will be much higher because their taxes may be higher than North Carolina, but the price of one barrel of oil, if that goes up, all of us basically face that price. Compared to last January, so January 2021, inflation rose by almost 8%.”

Ben Trainum, sophomore and stagehand for cultural and special programs at Elon, said that the increase in gas prices has made driving much more expensive.

“I don't drive on campus, I walk to all my classes, so it's not as bad. But if I'm driving around with friends or whatnot, on a weekend, it's noticeable because the cost of a tank went from 45 to like, $55, or $60,” Trainum said.

Prices have also gone up due to the pandemic. Production and shipping problems with items involving international distribution are causing a spike in prices of many consumer goods, on top of inflation increases.

“Initially, there were a lot of supply side issues, logistical issues,” Islam said. “Those improved a little bit, but then they got worse, because there's so much pent up demand, people want more stuff, that suppliers and other providers are not able to produce all those products.”

On Elon’s campus, these increases have affected housing and tuition prices. Increased demand and shipping delays involving construction materials such as lumber, have increased building costs across the board.

Elon University Vice President of Finance Administration Janet Williams said that the university is a tax exempt organization, so the increase in value of university-owned land hasn’t affected student housing prices at all. However, the increasing costs of building materials and food prices have caused increases in both tuition and room and board fees.

“We're also seeing that just getting the materials delivered is, there's a backlog on supplies,” Williams said. “We're doing things to try to schedule and manage around that, but COVID has definitely impacted even the supply chain.”

Williams said the recent tuition increases were made to pay for construction and renovation across campus. The 3.5% increase in room and board expenses are a direct product of inflation and supply chain issues, Williams said.

But it’s not just university costs that are increasing. Student wages have just increased by $1 an hour, from a starting rate of $9 to $10. Student wages increased to help students cover inflation as well as making campus jobs more competitive, according to Williams.

“We really believe that we have great opportunities for students to engage in and have engaged learning through their student work,” Williams said. “So we want to be competitive as much as we can. That's part of the reason for the increase.”

Sam Porozok, a senior and Elon tour guide, said the wage increase is very exciting, and much needed.

“It feels like everything's really expensive right now,” Porozok said. “And it makes it feel like the time I'm putting in is more worthwhile on actually spending time on these things as opposed to doing my schoolwork or hanging out with people.”

The $1 base wage raise, an 11% increase over the previous starting wage, is a larger percentage raise per hour than compared to inflation rates. According to Islam, this is a step in the right direction.

“It may seem like a $1 increase is very low. … Percentage wise we're all benchmarking it against inflation rates. So if inflation went up by 7%, then I would say, OK, the salary increase would be 7%, or higher,” Islam said.

Kirstie Doehler, professor of statistics and Alamance County resident, wrote in a statement to Elon News Network that although the increases haven’t hurt her too much, they have led to some noticeable changes.

“I have noticed an increase in gas prices and especially housing prices,” Doehler wrote. “I am thankful that I bought my house five years ago when it was much more affordable. Although I don’t always notice increased prices for specific items, I do sometimes notice that as time goes on I have less money left over at the end of the month.”

In order to help students out with the rising costs, Williams said that in addition to the wage increase, student financial aid is budgeted to increase proportionally with tuition. Williams also said that Elon is still prioritizing the university’s position as a “Best Value” school, meaning it’s tuition and board costs are intended to be lower than colleges offering similar programs.

“Last year, the increase was only a 2.1% increase,” Williams said “And even with the increase this year, Elon's cost remains more than $15,000 lower than the average for peer private universities.”