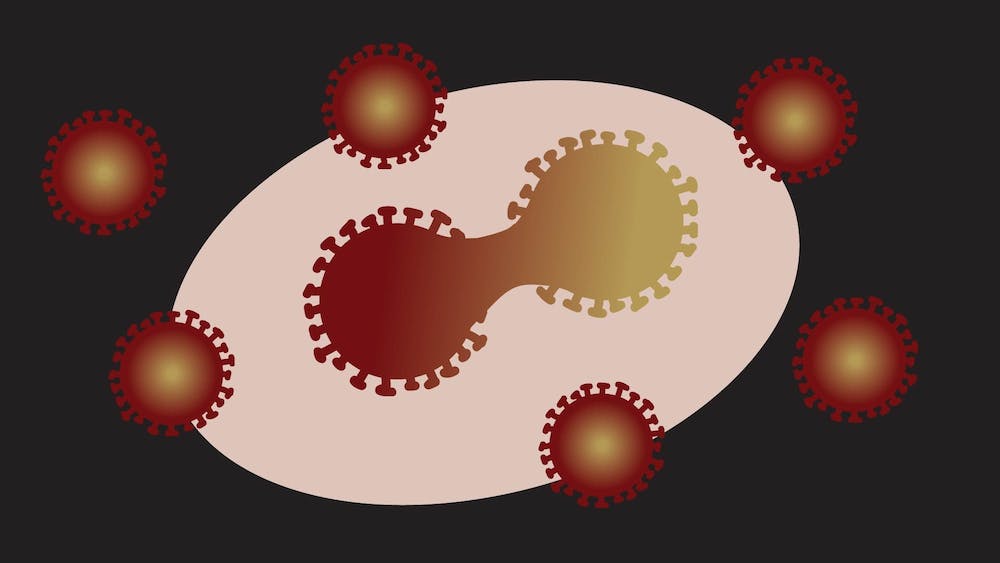 Joann Gruber, an epidemiologist and professor of public health and epidemiology in Elon’s department of public health, discusses the spread of the Omicron coronavirus variant. Gruber has worked in different federal, local and state governmental agencies around public health during her career before she arrived at Elon in 2020.

What is so different about Omicron, compared to the previous few variants that we've seen, that causes it to spread so fast?

“I don't necessarily know exactly the biological mechanism. In terms of the shift, I think there's a few things going on. There's an intersection between the biology and the social aspects because we have these changing viruses, they can make these little little slight changes, and it sounds like Omicron sort of comes in, it really goes into your very upper upper respiratory tract. And so that's one of the reasons they think is so contagious — it stays in this upper part of your respiratory tract and then can exit and leave and be spread easily from person to person.

Also, I think we've missed a lot of different mitigation strategies as well. There's been more gatherings with the holidays and travel and these kinds of things that also feed that spread. …  We're still trying to kind of understand exactly why it is so contagious, but it definitely is much more easily spread from person to person than the other variants.”

Does this fast spreading make it perhaps more dangerous as a variant?

“It's complicated with diseases because mild diseases can spread really fast, so it could be, it seems like it's a little less severe. The problem is, it's kind of yes and no.

Yes, part is that it is dangerous because you can just end up with massive cases.  We've seen this big spike, and then this big increase in hospitalization, especially among unvaccinated people. I think that's the real concern when you have such a wide spread of the virus.

From my perspective, I'm concerned about our healthcare resources and how we can keep adequate care for people and both people who have COVID and don't have COVID, and so it kind of becomes a societal problem in that way, versus, I think there is some more mild disease happening, which is good, especially among vaccinated people. The vaccines are so important, and a lot of vaccinated people seem to have asymptomatic infections or very mild infections, which is really good.

Going back to the point of vaccines, Elon recently mandated the boosters for everyone. Have the boosters basically been proven at this point to be effective?

“The boosters are really important for helping manage disease, and I think, protect against Omicron and maybe Delta too. I think it's a great move on the part of the administration, and I think it can help mitigate the spread within the campus and also externally to the community. Hopefully, it can help minimize the amount of spread in both places.

I think it is really important that students get the booster, both students, staff, faculty, everybody get boosted because it does really increase that antibody titer, which is one part of our immune response. We also have other parts of our immune response that are harder to measure, usually, but it has been shown to really bring up those levels, and those levels do help you a lot against Omicron.

It’s really important, especially with these surges, to get boosted as soon as you can. And if you did get Johnson and Johnson as your first dose, try to go ahead and get one of those mRNA, Pfizer, Moderna vaccines, they complement each other really well, because I think that J&J vaccine gives some more sustained protection too, so it's a good move.”

Has this variant been more damaging to younger populations?

“I haven't heard a ton. I tried to do some reading here and there, but I have heard that there are some. Hospitalizations have increased among children. I don't know if those are children that can't be vaccinated, and that's always a concern because we still have this swath of the population that can’t. They're vulnerable, susceptible. And then you, of course, don't want them to have severe outcomes in these really young age groups.

I know that there has been some increases there. And you kind of expect that when you just have a lot more spread of disease that you're, even if it's really rare, you're going to see these things happen. But I don't necessarily know of a big shift in the dynamics, I think it's really the unvaccinated who are the most susceptible still.”

Do you think that what Elon is currently doing with requiring boosters and masking inside is enough to curb the spread on campus?

“Yeah, I think it's definitely a great place to start, and I think those indoor mask mandates are absolutely essential.  It’s really important, especially where people have to be in required spaces. Students may choose to do things; when there's a choice involved, it's different than when you have to be there and thinking of how we can protect staff, faculty, students, who have to come together in classrooms.

For example, some people might be taking care of older people or very young people that can't be vaccinated, and so I think that masking requirements are really important. I think that booster, anything we can do to layer those interventions on top of each other, I think is really important … I'm glad that the administration is doing that.”

How do you think North Carolina at large has been handling the restrictions?

“I think it's been like a lot of places in the U.S. public health is a local issue, and so states can get involved. I'm really disheartened by the politicization of the pandemic, it's really disheartening as a public health person because it just does so much damage to public health and just us working together to get past this pandemic. So, I think it really comes down to all these political issues, but

I know some of the bigger cities and things in North Carolina are going back to the mandates. I think it's important, I wish we could keep those in place because I live in Guilford County and we had a mandate, and then it let up right before the holidays. And then right as everything was really expanding, they were scrambling to get it back into place. The CEO of Cone Health was begging to have it be re-implemented because of the health care utilization problem.

I just think we have to be kind of patient and maybe keep holding those things in there in place because they actually can help. And especially where people have to go and do their shopping, and there can be older people who are even vaccinated that need to go get their prescriptions, things like that. I think, when we think about our collective society, and what we can do, I think that's really important.

As a state as a whole, I don't necessarily expect to see anything a lot different than we have, but I could be wrong, and I could be surprised. I think there's going to be more focus on also getting out more testing. And I think that's really helpful to complement the masking, you know, again, thinking about the layers of the interventions — we have vaccines, we have indoor masking, you know, we have social distancing, we isolate people who are sick. We layer them on top of each other to try to get a hold of the case numbers, and, of course, our healthcare utilization. That's a big one.”

Is there anything else that you think we should be doing as a community? Or is this just the sort of thing we’ve got to ride out?

“I think at this point, you know, we've been in the pandemic, everybody's sick of it. I'm sick of it, we're all sick of it. But it's hard because the pandemic goes on whether or not we want it to end, whether we pretend it ends. …

It's funny, because it's not like anything sexy or new. It's just the same things we've been doing all along, just really committing to those interventions that we do. …

That's part of it, it's hard sometimes, the communication around it, because we're still learning about the virus, how it spreads, how long you have immunity, how sustained is your immunity, how high is it, all these things. So, we might need additional boosters, who knows, and there could be other variants that emerge. So it will end, the pandemic will end. We always have to remember that and I think just do the things that we know we need to do until it ends.”