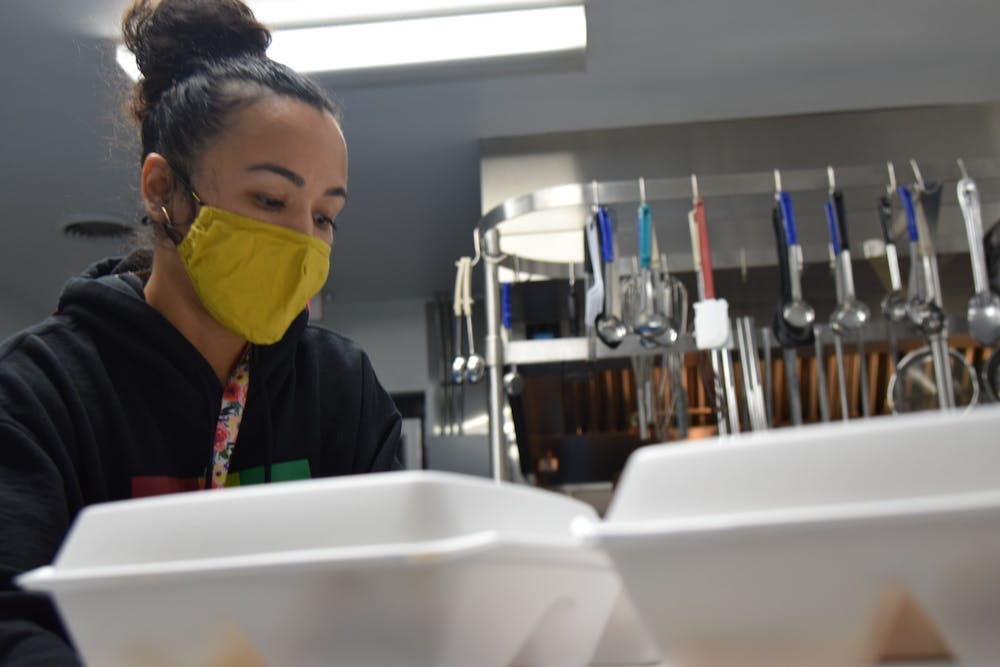 Photo by Kyra O'Connor | Elon News Network
Constance Currie stacks boxes of food for dinner on Tuesday, Nov. 16 at Allied Churches of Alamance County. The shelter and kitchen provides temporary, emergency housing and food to those in need.

Elon Campus Kitchen filled trucks the week of Nov. 15 to 19 — National Hunger and Homeless Awareness Week. With this week bringing awareness to food insecurity in the area, and the upcoming Thanksgiving Holiday, Campus Kitchen worked to increase food and donation preparation.

Autumn Cox, assistant director of the Kernodle Center who works with The Filling Truck Initiative, said she is eager to start the season of giving.

“We work with Elon Dining to get a catering truck that will be stationed at just different areas across campus,” Cox said. “And the goal will be to fill the truck with different donated goods by the end of the week.”

Autumn Cox, assistant director of the Kernodle Center, is eager to start this season.

All the donations from Filling the Truck will go to United Way of Alamance County, who will distribute the food among its participating food banks throughout Alamance County.

“United Way of Alamance County is really wonderful and just knowing what the needs are across the county and kind of sending things out as they're needed,” Cox said.

Elon Campus Kitchen is also working with UWAC, who redistributes donations to pantries who need it, according to director of community change Sally Gordon ‘18.

“We've been in Alamance County for a little over 90 years now...raising money and donating it back out to the community,” Gordon said. “That kind of slowly morphed over the years and became the big campaign that we do every year and the grants that we give out.”

Elon Campus Kitchen has also collaborated with Allied Churches of Alamance County to prepackage Thanksgiving meals that were distributed Nov. 22 and 23, according to executive director of ACAC Jai Baker.

“We've already been collecting and preparing boxes in association with Second Food Harvest and Food Lion,” Baker said. “It will have all the needs or necessities to actually prepare and cook a Thanksgiving meal.”

In addition to the boxes of food that will be prepared, ACAC gave away fully prepared Thanksgiving meals on Thanksgiving day.  Because of the COVID-19, the process operated as curbside pickup and carry out options. However, Baker said this didn't sacrifice the quality of food.

“We really take pride in making sure that when you look at the top of your meal that it is presented in a manner that is close to what you receive that four or five star restaurant,” Baker said. “So it would definitely be a lot of detail going into that meal to make sure it is hot, delicious and presented in a great manner.”

While Campus Kitchens and ACAC are working closely this holiday season, ACAC has had a close relationship with Campus Kitchen since 2015 when Baker became executive director.

“I just think over the years we have been able to really focus and deepen that relationship,” Baker said. “It was a bud in 2015, but it has blossomed now to this great partnership.”