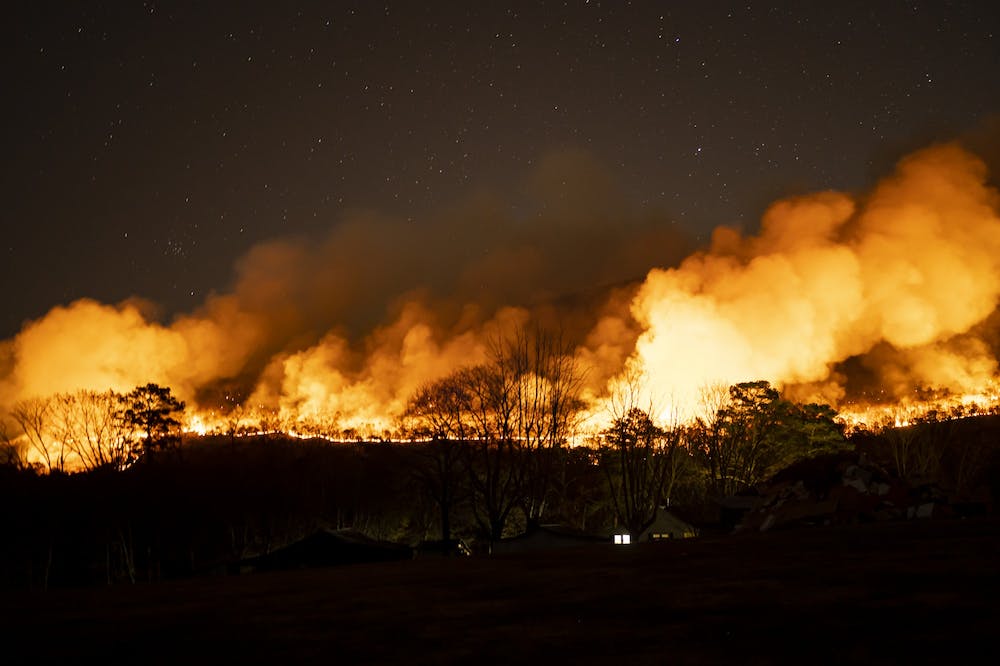 
Late in the evening on Nov. 29, 2021 Pilot Mountain and the surrounding forest burn as a wild fire sweeps through the state park. With over 500 acres already burned and about 30 firefighters working to limit the fire's spread, it has not yet been contained.

Less than 100 miles from campus near Winston-Salem is Pilot Mountain, where a forest fire started on Grindstone Trail is still burning after almost a week. Officials say it was caused by a campfire.

On November 29, the North Carolina Forest Service issued a statewide burn ban until further notice, prohibiting all “open burning” and canceling all burning permits. According to the North Carolina Department of Environmental Quality, open burning includes leaves, branches and other plant material. Burning trash, lumber, tires, newspapers, plastics or other nonvegetative material is illegal in North Carolina, but also applies to the burn ban.

According to the burn ban press release, campfires, fire pits, outdoor fireplaces and burn barrels are also subject to the burn ban because they are considered open burning and because it depends on how close they are to an “occupied dwelling.”

Here on campus, the burn ban meant that Elon Outdoors’ final weekly S’mores With Outdoors event of the semester became a movie night outside, complete with s’mores to-go packs for students. At the event, the organization showed a Patagonia film about the resilience of trees and climate change instead.

Elon Outdoors Team Leader and senior Grace Contino said she wants to use the fire as an opportunity for people to learn about climate change through an event close to campus. Contino said they did not want to cancel the event entirely because it was the last one, so they changed how it was structured.

“We know that it brings the community together and it’s a nice study break for people and a nice way to break up the week, so we still wanted to offer something but we can’t offer a fire,” Contino said.

Contino said Elon Outdoors travels to Pilot Mountain once a semester to hike and the Pilot Mountain fire is the first time she’s seen a forest fire this close to home.

“Knowing that it was happening in a place that I’ve been to, that I’ve driven past a few times felt weird and eerie,” Contino said.

The Grindstone fire on Pilot Mountain has burned 1,050 acres of the 3,800-acre park and is now 80% contained, according to fire officials.

Pilot Mountain State Park is expected to be closed all week and there is no timeframe for when it will reopen.