Ricky Hurtado speaks to the intersection between education reform and equity 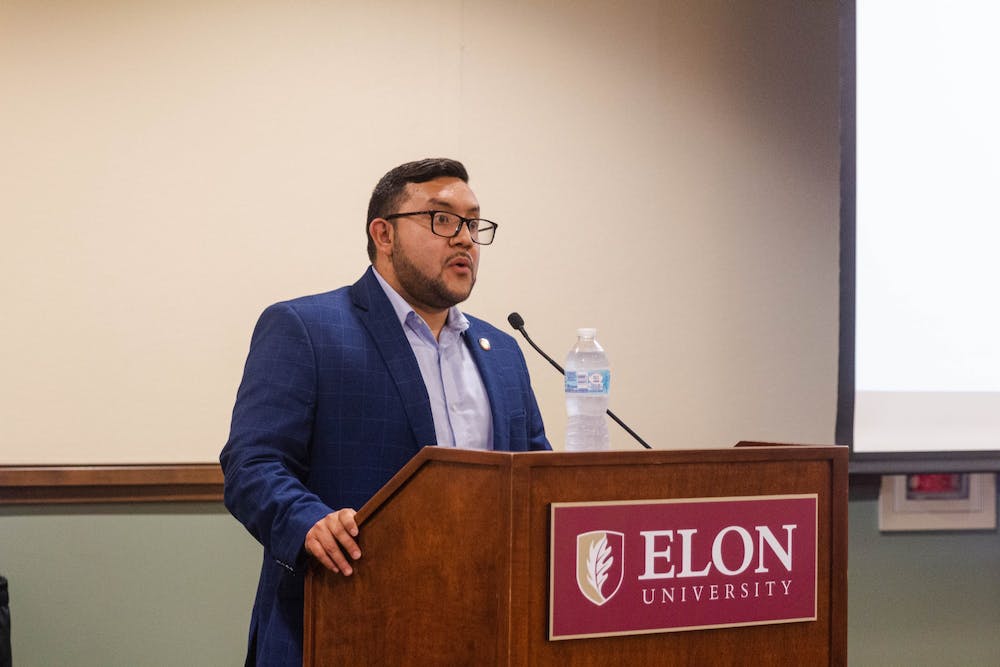 
Ricky Hurtado, a member of the North Carolina House of Representatives, is the second speaker in the lecture series, Educating for Equity, sponsored by the Dr. Jo Watts Williams School of Education. Hurtado spoke to Elon students, faculty, staff and community members about equity within public education on Oct. 6, 2021.

of the Elon community gathered Wednesday evening in Upstairs Lakeside to hear from the second speaker in the Educating for Equity lecture series, sponsored by the Dr. Jo Watts Williams School of Education.

Hurtado grew up as the son of working-class immigrants from El Salvador. According to Hurtado, his parents left El Salvador during the Salvadoran Civil War and sought asylum in the United States. He said immigration reform gave his family access to job opportunities, housing, and freedom of social mobility.

Despite his family having newfound educational and job prospects, Hurtado said he still faced challenges of equity and accessibility while attending school in rural North Carolina.

Many students in the state and in Alamance County today face similar challenges, particularly with access to educational resources, classroom climates, broadband internet access and gaining citizenship. There is an existing communication gap between educators and students and families as well, according to Hurtado.

“We’ve seen so many missed assignments and so much misunderstanding of what’s supposed to be happening when in reality those parents never truly had that engagement or relationship with that educator at that school, or never felt like they belong,” Hurtado said.

One hurdle many Latinx and international students face is the uncertainty of the Deferred Action for Childhood Arrivals, an immigration policy which allows undocumented immigrants who came to the United States as minors to legally remain in the country to study or work. Many international students rely on DACA to remain in the United States, yet legal battles over the constitutionality of the federal policy have left some worried, according to Hurtado.

Hurtado illustrated this through the telling the story of a student he knew and worked alongside — the student called Hurtado one day in tears and expressed concerns about accepting a full-ride scholarship from the University of North Carolina at Chapel Hill. The student eventually disclosed to Hurtado that her father had been detained due to a deportation order against him, and that her mother had numerous health conditions. Hurtado said the student faced an internal struggle between choosing to go to college or going into the workforce or military to support her family.

“That is the story of a young student… who did everything they’re supposed to, graduated with honors from high school, and still is faced with this decision that can alter her life forever,” Hurtado said.

For many students like the one Hurtado spoke of, receiving access to education and finding funding still remains an issue. According to Hurtado, many DACA recipients in the state don’t qualify for in-state tuition at postsecondary institutions and are not eligible for financial aid.

Students instead are seeking out higher education in nearby states as opposed to North Carolina, where they may be more likely to receive adequate funds to attend college, Hurtado said.

While Hurtado said he is continuing to work with both House Democrats and Republicans to address the ongoing concerns over DACA, he is hoping to expand the discussion surrounding equity within North Carolina’s educational system.

He said he believes that students and parents who face inequalities in the educational system regularly should have a seat at the table in discussions of how to close the equity gap. Hurtado also encouraged students to think about how they can bring conversations of empowerment and control over one’s future to the center of a room.

“For me, centering community voices is also about making sure that we are empowering those community members to take control of their future and to dream a little bit about what that could look like for them,” Hurtado said.

This article was originally published Oct. 6, 2021, and has since been updated.