S.M.A.R.T. aims to connect freshmen and transfer students of color 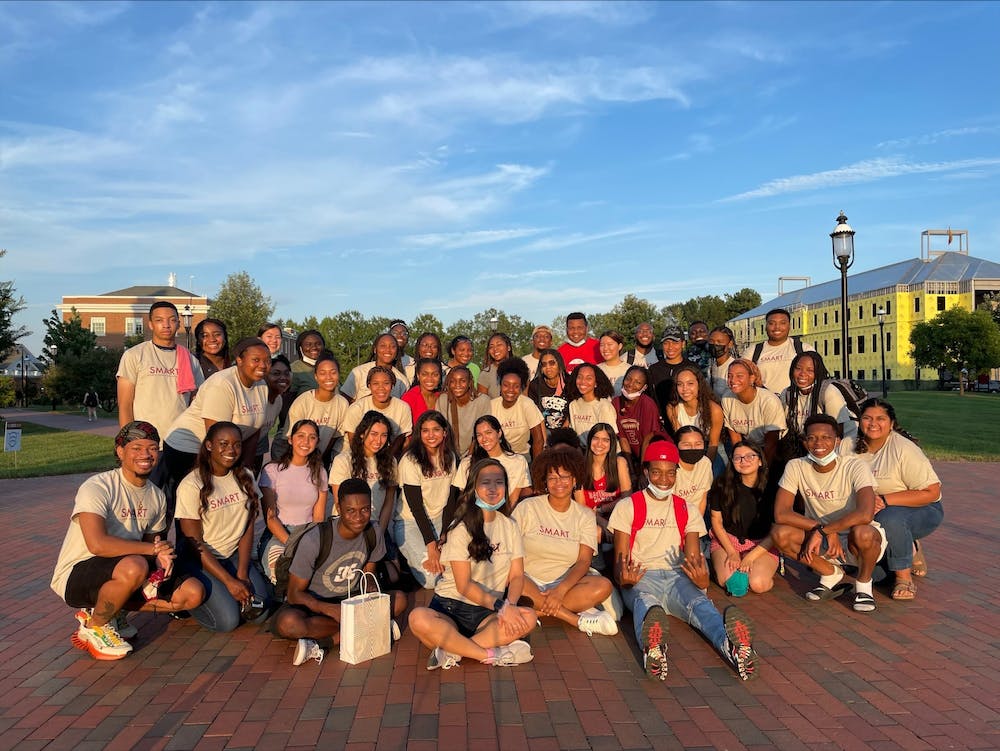 Karen Cruz-Ruiz grew up surrounded by people of color at school. Her school system was minority majority, and she had never known anything different. That is — until she came to Elon.

Attending a predominantly white institution like Elon was a difficult transition for Cruz-Ruiz. But one thing that helped make the challenge a little easier was the sense of community she felt from the Odyssey Program and through her S.M.A.R.T. mentor, Joyce Llopis-Martell.

“She made me feel at home, she made me feel like I actually belonged here,” Cruz-Ruiz said. “Like I could and would succeed, even if I didn't necessarily see people who looked like me.”

The Students Mentors Advising Rising Talent program was established in 1994, as a key part of the Center for Race, Ethnicity & Diversity Education. Aimed to help ease the transition of students of color to Elon, the program supports the specific needs of students who identify with the ALANAM community — which includes African-American, Black, Latinx, Hispanic, Asian, Pacific Islander, Native American, American Indian, Alaskan Native and Multiracial students.

By pairing freshmen and transfer students with upperclassmen, the S.M.A.R.T. mentoring program also hopes to aid students in their academic and social engagement throughout their time at Elon.

John Robinson-Miller, who serves as the assistant director for the CREDE, said when he thinks of the S.M.A.R.T. mentoring program, he thinks of family.

“It really is meant to be an opportunity for first years and first time transfer [students] to get a very in-depth relationship with people who have been through it,” Robinson-Miller said.

Robinson-Miller said every student of color’s experience on a predominantly white campus is different, and the S.M.A.R.T. program takes that into account.

“I think everybody has their different place of how they understood their racial and ethnic identity, really their whole identity, even before … they came to Elon,” Robinson-Miller said. “I find that there's a whole lot of students who, even if you understand that you're a part of the racially minoritized group or the global majority, you get to a place like Elon, primarily white, and you're like, ‘Oh, this is what this means.’”

The program itself uses a “house model” to explain the roles and responsibilities of faculty members, mentors and mentees. The mentor is the roof of the house, focusing on personal and professional development as well as community engagement. The mentee is the body of the house, focusing on professional development, community engagement, social wellbeing and academic identity.

The program also focuses on connecting students with other resources on campus, from the Latinx Hispanic Union and Empress to the Black Student Union and the Gender and LGBTQIA+ Center.

The community in the S.M.A.R.T. program emphasizes intercultural competency. Both Cruz-Ruiz and Robinson-Miller said the intentionality in helping students understand their intersectional identities and how to find community on campus is crucial.

“As Hispanic individuals, individuals of color, we're very used to our communities being very close knit,” Cruz-Ruiz said. “Being able to then translate that onto this community, and being able to feel like we have a close knit community helps us feel a lot more comfortable with who we are here.”

This year, the S.M.A.R.T. program partnered with Elon University Residence Life to put programming in the Historic neighborhood. There are mentors placed within Historic specifically to help freshmen students of color transition in residential spaces, in addition to academically and socially.

For Robinson-Miller, the 2021-22 academic year is only his second year with the program, and he is most excited to see what the program will look like in a more in-person space.

“I'm excited to really be able to continue it and to transform it in a way that meets the student of today, but still stands on the shoulders of the people who came before,” Robinson-Miller said.

Cruz-Ruiz, who now serves as a mentor in the S.M.A.R.T. program, is looking forward to more events in-person this year, and sharing the community within the program with her mentee.

“It's just the sense of connection, the sense of being able to feel like we were meant to be here,” Cruz-Ruiz said. “Because we indeed are.”