Katz, an author and journalist, spoke at Elon University Oct. 11 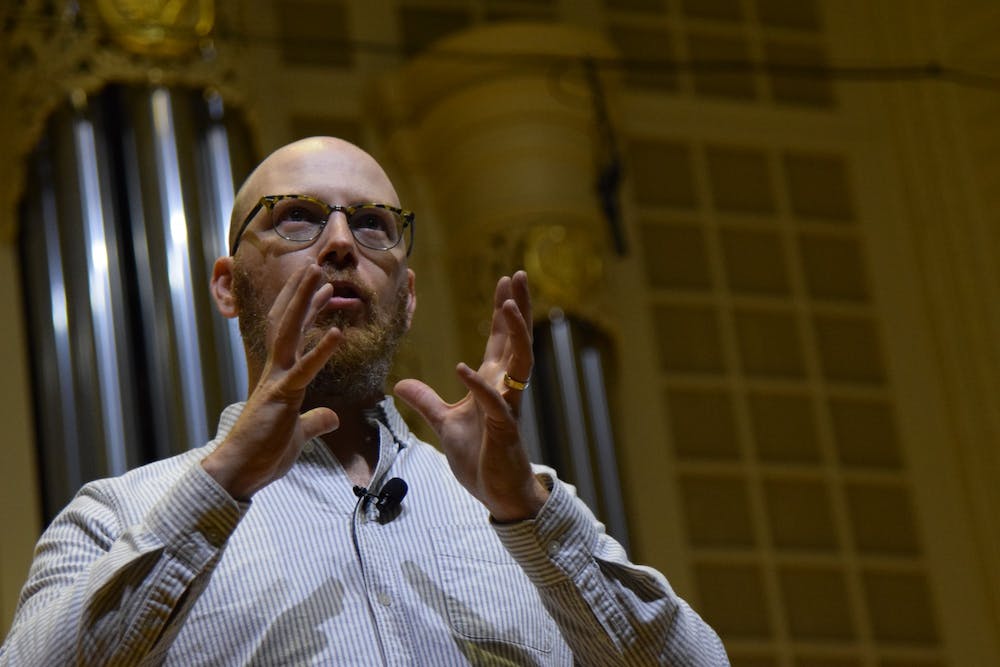 Photo by Kyra O'Connor | Elon News Network
Author and journalist Johnathan Katz spoke at Elon University about his perspective on the effect of western colonization on the modern world.

Zemari Ahmadi was killed by a U.S. drone strike in Afghanistan in August of this year. Ahmadi, along with nine other members of his family, was driving a vehicle that the U.S. mistook for being used by a branch of the Islamic State called ISIS-K.

According to author and journalist Johnathan Katz, this type of unapologetic brutality is not uncommon for countries across the world, including the U.S. As part of the Liberal Arts Forum initiative, Katz spoke at Elon University on Oct. 11 regarding the consequences of what he referred to as the imperialist mindset and the danger of a desensitized nation.

Katz kicked off his lecture by highlighting the injustice against Ahmadi and his family. Not only were they civilians, but seven of the ten people killed in the strike were children. Only after the U.S. received backlash for the strike, did the Pentagon acknowledge any sort of wrong-doing. Ahmadi’s remaining family has still not been offered compensation or reparations, according to the Los Angeles Times.

Jumping off of this concept, Katz provided a history lesson on the occupation of the U.S. in Afghanistan and Haiti for nearly 20 years, as well as the capitol building riot on Jan.6. Katz said that these three instances can be used to examine and define America’s current economic, political and militaristic climate.

“These three places and their histories and their stories are actually very, very closely intertwined in ways that I think are instructive for understanding them individually, us as a country and people and understanding the different growth that we Americans can take in the future,” Katz said.

Katz was the only full-time U.S. news reporter in Haiti during the 2010 earthquake and the Associated Press correspondent in Haiti from 2007 to 2011. He later broke the story that United Nations’ soldiers likely caused a post-quake cholera epidemic that killed thousands. Katz has reported from more than a dozen countries and territories.

In 2011, he was awarded the Medill Medal for Courage in Journalism and in 2019 was a National Fellow at New America. Katz also formerly directed the Media & Journalism Initiative at Duke University’s John Hope Franklin Humanities Institute, and still is a frequent contributor to The New York Times and other publications.

Katz is currently writing a book, “Gangsters of Capitalism,” about Gen. Smedley Butler and the legacy of the American empire. It is scheduled for release on Jan. 18, 2022.

At the event, Katz described in-depth America’s reported reasoning behind occupying Haiti from 1915 to 1934 and Afghanistan from 2001 to 2021. He also explained the motivations that were left unreported.

“If the reason we went to Afghanistan was to root out Osama bin Laden and destroy the Taliban government that was giving him sanctuary, then that mission should have ended in 2011,” Katz said. “But the mission of the war … continued for another decade, and that's because [the U.S. government had] these other ideals.”

To Katz’s point, the superpowers of the world have wreaked havoc on third world countries under the pretense of providing aid, education and “civilization.” Katz said that after millions dead, whole regions stripped of their resources and the will of stronger and foreign nations having been implemented on colonized ones, global powers want to forget the past and act as if each country started at the same starting line.

Professor Linda Dunn, who teaches under Peace and Conflict studies at Elon University, has been a member of a peace organization located in Alamance county for over 40 years. The group, which started off as Peacemakers of Alamance County, has now become a chapter of Peace Action. Peace Action is a national organization that focus on efforts such as war, nuclear threat, poverty, climate change and terrorism.

Dunn attended the lecture to gain Katz’s insight on how to best educate the masses regarding how people can be aware and active citizens.

According to Dunn, the Alamance chapter of Peace Action has largely focused on educating people about the current state of the country and how it came to be, which includes the anchor of institutional racism and the funding of America’s military might. With the concepts and ideals being brought to the forefront of American minds in light of events such as the withdrawal from Afghanistan and the riot on the capitol building, Dunn said she thinks it is more practical than ever to educate the public.

“I'm having a lot of hope right now,” Dunn said. “I really believe that you young people are becoming more aware of all these issues — how institutional racism and all those things are interconnected to this military abuse, and our mindset about spending so much money on war.”

Considering Haiti was the first country in the world to abolish slavery and gain independence in 1804, Katz said the nation carries great pride in holding its own identity and success. Roughly a century after earning that independence, American troops occupied Haiti under the pretense of restoring stability in the Caribbean.

According to Katz, during the 20-year U.S. occupation of Haiti American troops reinstituted slavery, toppled the Haitian Parliament and drained the country of its resources for American profit. Now, as a leader of the modern world, the U.S. still refuses to provide reparations or acknowledgment that Haiti’s current state of suffering is their fault, Katz said.

Not only did Katz draw the same correlation from the U.S. occupation of Afghanistan, but he also pointed to the insurrection of the Capitol building earlier this year as a byproduct of Americans' response to U.S. military might. Katz emphasized that not only is the U.S. responsible for the horrors of colonization, political instability and poverty, but the imposition of their force and will is still occuring — with no regard for the consequences on human lives.

“I think the first thing we have to do is to stop and look at ourselves in the mirror and look at our history,” Katz said. “That kind of realization has come back home in a major way, and Americans don't quite know what to do with it — and so some Americans are turning to America first.”

Although not a new concept, Katz explained the “brutalization” effect of a country like the U.S., where people become more and more desensitized to the destruction, death and poverty left in other countries by their own nation.

In the wake of more people learning about and empathizing with the damage inflicted upon lesser developed countries by global superpowers, Katz warned that without proper reparations these war-torn countries will fall to more corrupt and hostile systems. In the case of reparations, Katz said there needs to be an acknowledgment of what was stripped and stolen that placed developing countries at a severe disadvantage from the beginning.

“That's the kind of thing that can allow you to take these experiences, and curate this history, and turn it into something more productive instead of just doubling and tripling down on brutality,” Katz said.