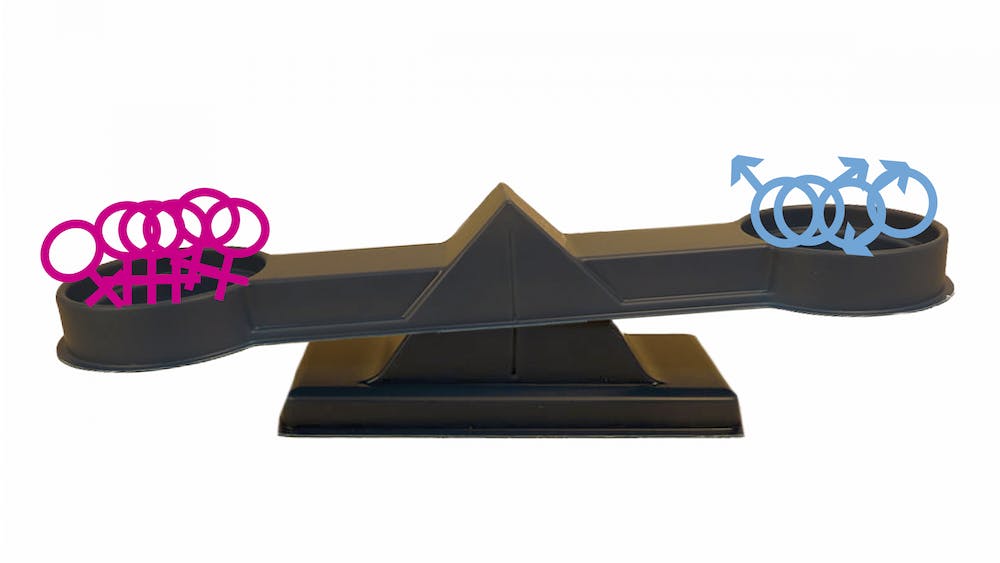 “It's been an issue for 30 years,” Mortenson said. “In 1990, there were many more women in higher education than there were men.”

The National Student Clearinghouse, a nonprofit research group, found that U.S. colleges enrolled 1.5 million fewer students than five years ago, and men accounted for more than 70% of the decline. But while the number of men enrolled in higher education is largely falling behind women across the country, this is not new for Elon University.

The female population at Elon University has reigned over males for the last decade. Since 2000, the university’s undergraduate gender composition has consisted of around 60% women and 40% men –– numbers that are still evident today, according to the university factbook. Some students have raised concerns that this gender gap is evident across many aspects of campus life.

“I had my global experience class and there were about 20-25 people in the class,” sophomore Ben Weas said. “But there were only five males in it, five guys, and the rest were female. And so that dynamic, it does feel a little bit odd.”

The decrease in men attending college is due to a number of reasons, such as the setup of K-12 learning and the possibility of earning a job without a degree. Freshman Izaiah Ezeji-Miles said college was always a goal in the back of his mind, but he didn’t put much thought into it until the time came.

“I wasn't really even thinking about college until I got to senior year of high school, and I was like, ‘Oh, crap. I don't even know what college I want to go to,’” Ezeji-Miles said. “I didn't really have a dream college.”

Ezeji-Miles said that if he wasn’t given a scholarship at Elon, he would not be attending the university, and if he didn’t attend college, he would be in the military. Ezeji-Miles is majoring in computer science at Elon, and he said the female-male gender gap is not as evident in his classrooms.

According to Mortenson, women tend to succeed academically at higher rates than men in the primary and secondary education levels. They then take that success with them if they choose to enter a higher institution, but it is not as highly reflective in men.

Elon continues to combat the female-male gender gap through its recruiting strategies for freshman students. The five most represented states among Elon’s fall 2021 student population are North Carolina, Massachusetts, New Jersey, New York and Virginia. However, according to Vice President for Enrollment Greg Zaiser, the university has spent the last five years investing more resources in Colorado, Texas, California and Illinois — states that follow the five states with highest enrollment numbers.

“Elon’s recruitment footprint continues to expand nationally and internationally,” Zaiser wrote in an email to Elon News Network. “Most of our recruitment territory is reflective in the student body since 46 states are represented in the [freshman] class this year. Market awareness and proximity to campus play a major role as well … Our model of expansion has not changed the female-male ratio on campus.”

The university’s majors and programs have also contributed to the recruitment of male students. Elon’s engineering program and the Love School of Business tend to receive more male participation, according to Zaiser. The number of students majoring in engineering increased from 56 in 2019 to 101 in 2021.

“Engineering in particular is attractive to males and females but may ultimately attract more males to campus than we have seen as the four-year program grows,” Zaiser wrote. “We’ve added a focus on recruiting from all-male high schools and inviting counselors from those high schools to campus for comprehensive programming.”

While engineering and business majors tend to attract more male students at Elon, sophomore music theatre student Zeth Dixon said within his program, he tends to see the reverse.

“It’s evident in the music theatre program and in our campus as a whole,” Dixon said. “I’m one of the few males in the room sometimes, which I don’t necessarily have a problem with, I think it’s interesting.”

While Weas said he sees a disproportionate female-male ratio in his classes, the dynamic changes when he enters the eSports lounge, where he is surrounded by mostly men, including the all-male eSports executive board.

“It adds a different angle to Elon than kind of the rest of organizations on this campus,” Weas said.

Though it’s possible men may be more interested in attending Elon because of organizations  like the eSports club, Elon does “not fund or provide resources to organizations or programs differentially on the basis of gender,” according to Vice President of Student Life Jon Dooley.

The gender gap is also evident in sports, but unlike many other areas of campus, the gap is reversed, with Elon’s athletes consisting of 60% men and 40% women, according to Zaiser.

“We hear from students – both male and female – that athletics is important,” Zaiser wrote. “National and Elon research indicates that male students tend to migrate to more urban and larger settings. It used to be that private liberal arts colleges and universities had more female students than males. In recent years, even flagship public schools have seen more female representation.”

And although there is a gender gap with student athletes, the same contradiction can be found with coaches at Elon — women coaches are more underrepresented in women’s college sports than they were 50 years ago.

If the university was to reach 70% women and 30% men, Elon would face the possibility of being a majority female institution. Zaiser wrote that the university has found ways where this can be prevented in coming years, such as such a higher percentage of men committing to the university than women. Elon has also been growing its transfer population of students in the fall, where the university has seen more men come through their transfer system.

“I don’t anticipate considerable erosion in our male-female representation on campus,” Zaiser wrote. There is of course a concern that if the percentage of one sex over another increases significantly, we will be less appealing to students overall. This is another reason we pay attention to this.”

But the question of why women outnumber men in higher education remains for many. According to psychology professor Catherine King, while there are fewer men attending college, they are still showing up, and it’s the women who work harder to get similar results to men in the workfield.

King teaches a core capstone course focused on women’s, gender and sexuality studies and studying this gender gap. Despite Elon’s disproportionate female-male ratio, King said what matters most is what students attend college for: to learn.

“I want highly motivated students no matter what their gender is, and that's just me selfishly,” King said.

While it’s difficult to see a solution in sight to the gender gap in education, Mortenson said it begins with the introduction of more male role models in K-12 education, which should carry into higher education and increase male presence in educational institutes.

“We have to provide an active, hands-on learning experience for boys if we want to keep them engaged in learning,” Mortenson said. “We need to provide male role models in the classroom so that boys see what adult men do.”

Since widened gender gap numbers were reported in September, colleges across the nation are feeling pressure to scale their rate of male applicants to encourage intellectual diversity and avoid a female dominated student body. But at Elon, dealing with the numbers will only bring more recruitment strategies for the university.

“Elon is nimble,” Zaiser wrote. “We’re constantly evaluating things and work to pivot appropriately. This is not a new topic for us and we have made intentional investments to respond and curtail erosion in the number of enrolling male students.”