Remembering ‘the person behind the scenes’ 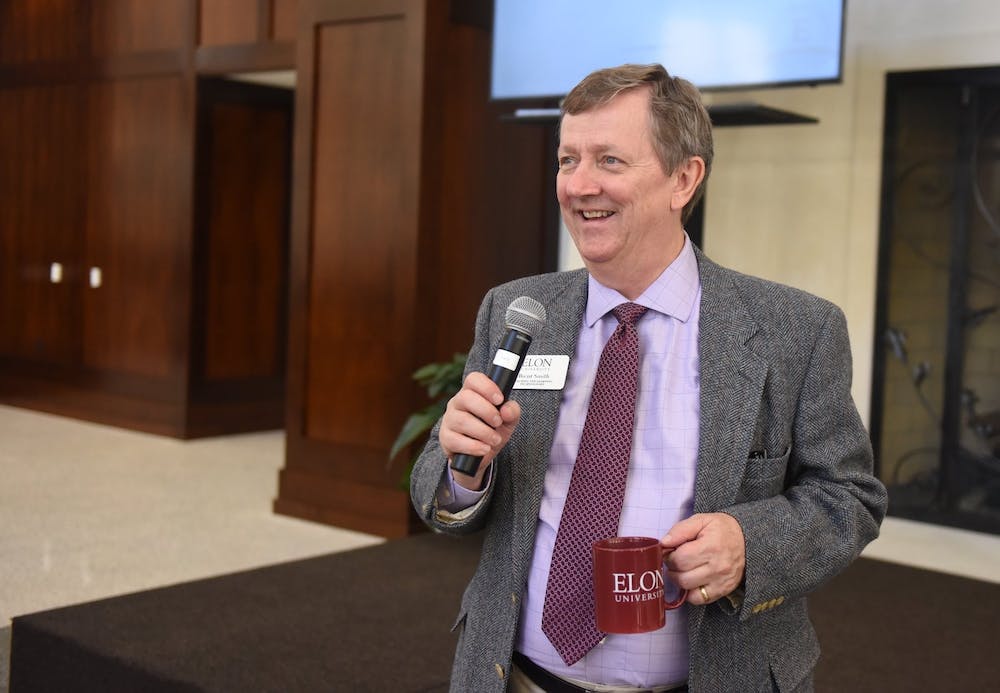 Brent Smith, assistant director of Teaching & Learning Technologies at Elon, died on Mon, Oct. 4. Smith was honored Oct. 6 at a Gathering of Friends as a mentor, coworker, friend, husband and father.

“There are people out there, faculty and staff alike, who truly care about students at a deep level,” Media Services Lead Sean Walker said. “Brent was one of those people.”

Smith spent nearly 24 years working in television, including being a production assistant with Guam Cable TV in Agana, Guam, and then spent two decades as a production manager for KCBY-TV in Coos Bay, Oregon.

After his time in television, Smith worked at Rutgers University before coming to Elon University in April 2013 as a video integration manager. He served in this position for three years before being promoted to assistant director of Teaching & Learning Technologies.

Walker met Smith when Smith was applying to Elon University, meeting for lunch with his soon-to-be colleague, mentor and friend. Walker said he remembers how happy and upbeat Smith was when they first met, and how Smith wanted to spend time with every department in his first month at Elon.

“It was really indicative of his approach, he didn’t try to totally change things,” Walker said. “He learned and loved observing.”

In his role as assistant director, Smith worked to provide audio and visual support for events, managing live event video production and managing facilities in the School of Communications.

Walker said Smith was at the forefront of changes when the university pivoted to virtual interactions — making sure graduation, convocation and other ceremonies went smoothly online.

“There are crews of people behind the scenes making all of that happen and Brent was a leader of those kinds of endeavors, particularly in COVID,” Walker said.

When working with Media Services, senior student technician Lissy Shortall enjoyed how Smith focused on the students in the office.

“Brent was an absolute joy to have in the office and brought so much happiness to everyone,” Shorthall wrote in a statement to Elon News Network. “It wasn't uncommon to hear him singing from his desk, waving happily from across the library or cheering all of us on a day to day basis.”

Senior Jeremy Palladino has worked in Media Services for three years. This year he served as a team leader, and worked with Smith.

“When I first met Brent, I knew he was the supervisor of my supervisors, so I was a little intimidated,” Palladino said. “Until I quickly found out about his personality, which was super evident. He’s a very goofy soul.”

“The word "goofball" tends to come to mind in the best way possible — he made me laugh all the time and we would often talk about the fun ties he would wear and switch up day to day,” Shortall wrote in a statement to Elon News Network.

Palladino said Smith was always excited when an event was going on and he got the opportunity to work with students. Palladino said as an administrator, Smith is really good at supporting everyone around him.

“He definitely was the glue to a lot of the operations going on, especially for technology here on campus,” Palladino said. “He definitely has the perfect personality for that job. He really likes seeing other people succeed.”

When remembering him, Palladino will always cherish Smith’s approach and interest in people — especially students.

“He would always chat with us passing through the office,” Palladino said. “He was always asking about what project I was working on. And when I was lucky enough to work an event with him he would always try to foster and guide me through what was going on.”

To those who did not get the opportunity to know him, Palladino said he wants Smith to be remembered for his dedication to students. Reflecting on his job in Media Services, Palladino acknowledges that that opportunity did not exist for student workers before Smith pushed for them.

“It’s only in the past 10 years that he integrated students working on events going on campus so we can help out with setting up for speakers and graduation and such,” Palladino said. “He played a huge role … in getting student workers acclimated into technology.”

Palladino said Smith was always singing, always dancing and always interested in everything that’s going on.

“When I think of Brent, I think about ‘how is this old man still full of wonder?’” Palladino said.

Messages of sympathy can be sent to Alamance Building 213E, 2575 Campus Box, Elon, N.C. 27244. In lieu of flowers, the family encourages those who feel compelled to make a donation in honor of Smith to support a local library. For those who wish to make a donation to a library in the Elon area, gifts can be made to the Carol Grotnes Belk Library at Elon University or the Alamance County Public Libraries. Smith is survived by his wife, Peggy and daughter, Mallory.

“His presence is definitely going to be missed,” Palladino said. “He was just so full of energy. Especially in times like these, you need people that have a good spirit and good energy.”

This story was originally published Oct. 6, 2021 and has since been updated.