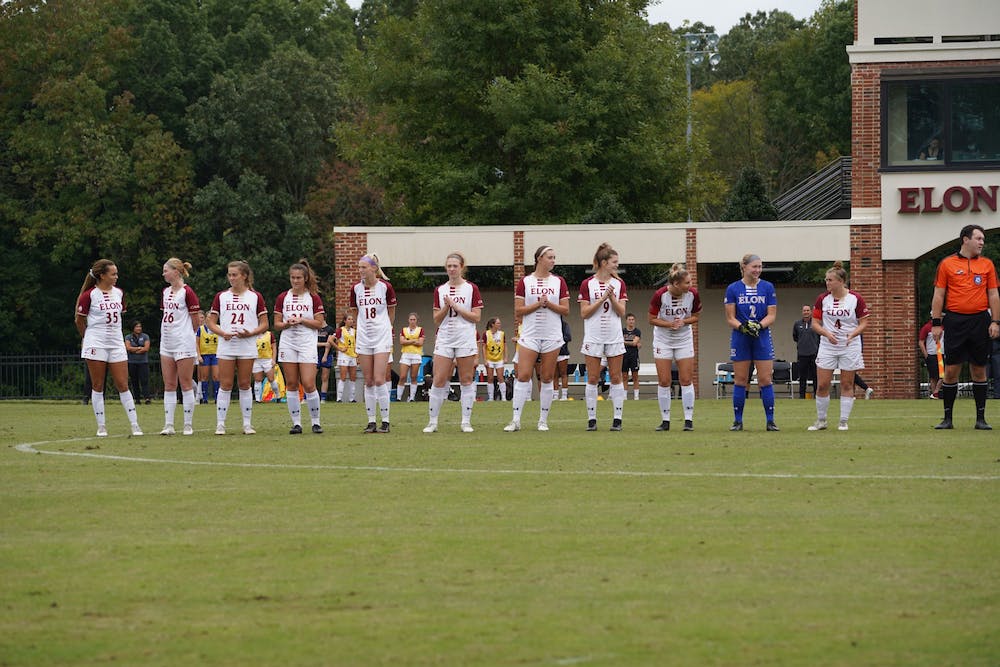 Elon University’s women’s soccer team celebrated its seven seniors Sunday before its game against the Towson University Tigers. However, Elon was unable to earn a Senior Day victory, losing 1-0 at Rudd Field in a physical game.

Tigers forward Jasmine Hamid scored the game’s lone goal in the 54th minute from the penalty spot after freshman defender Katie Lowe took her down in the box.

Head Coach Neil Payne said he was frustrated with the penalty kick given to Towson.

“I felt like if it wasn't for a bad call then, I feel like we shouldn't have lost that game today,” Payne said. “Overall, I can't be disappointed in the performance. But we definitely didn't deserve to lose the game.”

Both teams resorted to a more physical style of play, with the two teams combining for 23 fouls over the course of the game. Though midfielder Makenzie DePriest-Kessler did not agree with the penalty that led to Towson’s goal, she said she is proud of her team’s effort.

“We played our hearts out. We left it on the field,” DePriest-Kessler said. “The goal came from an unfortunate call, which is something we have no control over.”

Rain on Saturday night made the field wet, making conditions difficult for players. Payne said he liked how his team handled the ball despite the sloppy field.

“The field was a little difficult because it was really wet, but I felt that considering the conditions, we moved the ball around really well,” Payne said.

This game marked the Phoenix’s fourth loss by one goal this season. The team registered nine shots with four on goal, but failed to convert.

“I thought our back line was exceptional today. Our mentality was exceptional. The piece that's missing is just that final decision or final execution,” Payne said.

“It’s an unfortunate result, but we push on from here and we take it with a grain of salt and we play Northeastern next Sunday and give it our all there too,” DePriest-Kessler said.