COVID-19 created new childcare difficulties for faculty, forcing some to rely on support from the university 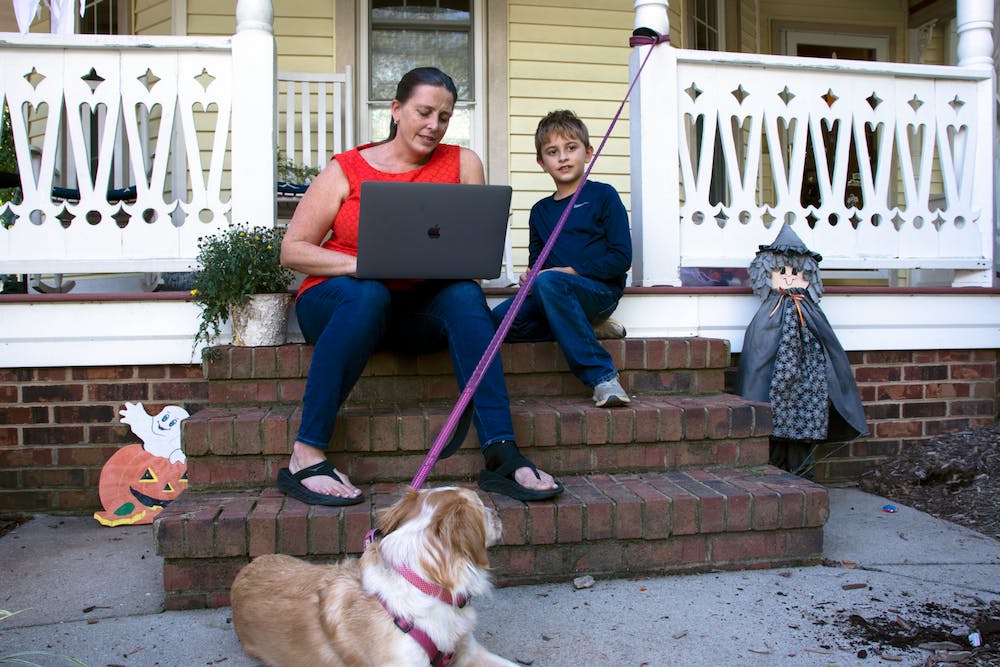 Photo by Avery Sloan | Elon News Network
Communications professor Kathleen Stansberry and her son, John, sit outside their house after school. When the pandemic hit in March 2020, John was one of Stansberry's sons who needed childcare while attending virtual school.

Childcare in the town of Elon is a challenge for communications professor Kathleen Stansberry, and has been a consistent struggle since Elon University shut down in March 2020, the same time her three kids were also sent home from Elon Elementary.

“Having very young kids trying to figure out how to use Zoom and Google Classroom, and I mean very young — like first grade, kindergarten — was overwhelming,” Stansberry said. “The childcare options just weren’t there anymore.”

Stansberry was teaching full time when the pandemic hit, and with her kids attending virtual school and immunocompromised family members, the struggles came to her all at once.

But even after the return to in-person learning, this experience has only continued for Stansberry, and other faculty members are facing it too.

Justine Nienow, senior assistant registrar for technology, also faced a unique set of struggles with her own young child and coming back to work during a pandemic. Nienow’s son was born in December 2019, resulting in her maternity ending in March — the same time Elon students were also sent home. Nienow was left with no daycare options until June.

Nienow said how this forced her to rely on the flexibility Elon exhibited in allowing her to work from home in the fall of 2020 and support from family members, in addition to her daycare once that became available.

“I think there was definitely a definite shift of ‘family is important,’” Nienow said.

Taking unpaid leave was something that made a significant difference in being able to manage her three children and their classes, according to Stansberry.

“At the beginning I was primarily juggling my classes and the kids' classes and trying to sleep wherever I could. It was not easy,” Stansberry said. “[I have] hilarious pictures of my six year old climbing the stairs to avoid his classes, hiding under the table. A lot of time was spent finding him, and then physically putting him in front of the computer screen.”

Though this was a challenging experience for faculty and staff with children to have to contend with, other professors acknowledged how the support from Elon University, both formally and informally, was crucial for their success in teaching and parenting.

Associate dean and communications professor Tony Weaver has personally benefited from the informal support he has found from the Elon community. Weaver said the support on an individual level of the Elon community was what made teaching and parenting through a pandemic a manageable experience.

For Weaver, Elon supporting its faculty and staff through regular checkups and taking the time to understand what other parents are going through is what was valuable. He felt like the Elon community really came together to support each other as there was a common understanding about what others were going through.

“I think a lot of us operated hour to hour, day to day, and so we notice one of our colleagues having a tough day, that’s when you try to step in and help,” Weaver said.

This informal support has remained present for Will Pluer, professor of engineering, despite being new to Elon this semester. With his daughter born in April 2020, Pluer watched COVID-19 shift his childcare plans. Other professors offered to step in for Pluer if needed — covering classes, scheduling and making sure his daughter was always accounted for.

“On the individual level, other faculty members are very encouraging and get references or help out with a class if I need to.” Pluer said.

While the informal support was also something that Stansberry has noticed and has been important for her with her three sons, she also took advantage of the formal support that Elon offered. Stansberry discussed that the main programs Elon offered faculty was to take unpaid leave, as she herself did, or if a professor is pre tenure to extend their tenure clock, giving them more leniency on when to complete everything necessary to obtain tenure status.

With professors who are parents struggling to manage teaching and helping their own kids work from home at the same time, having increased flexibility for the timeline of what goes into obtaining tenure is beneficial.

The evidence on these effects are currently limited; Stansberry discussed how delaying tenure clock and unpaid leave negatively impact female faculty to a greater degree. These are things that appear to widen the gender gap in academia as women are more likely to not continue in their career, or not progress into leadership roles.

In the journal, Women’s Experience of the Tenure Process by Debra J. Cody, it showed that it is not enough to solely extend one's tenure clock, as male professors in higher education are more likely to already feel supported by the University and be satisfied with the tenure process, meaning that extending the tenure clock won’t make it easier for women to obtain tenure. This journal also showed how at other Universities where they have previously allowed professors to extend their tenure clock, they lacked family centered policies, resulting in this extra time still not helping women get tenure.

Stansberry also discussed how some of Elon’s assistance isn’t an option for other faculty members — taking unpaid leave and delaying one's tenure ensures that one will be getting paid less presently. This means that while the support Elon University provided to faculty has been felt by many and seen positively, these options aren’t feasible for everyone and may have certain future ramifications for female professors.

“It was hard to stay on task,” Paul said. “I mean, back then I was like, I always got good grades. I was a little bit ahead. Usually, I can usually get that stuff done, but I think that kind of dropped when I went in virtual school.”

This year put stress on Stansberry and her kids as they all were forced to adapt to a new setting, making the support that Elon University gave professors crucial. Even with this additional support, these programs were not without problems. Stansberry is concerned for the future overall and the effects that’ll be seen, particularly for women.

“We moved here for Elon so that I could work here, which I love and I’m glad we did, but it does leave behind, it does mean not having those family connections. So we built it up with friends and social support, and then COVID hit,” Stansberry said. “I think this is going to have long term repercussions for women in professional positions, both for Elon and other universities, and just in the workforce as a whol