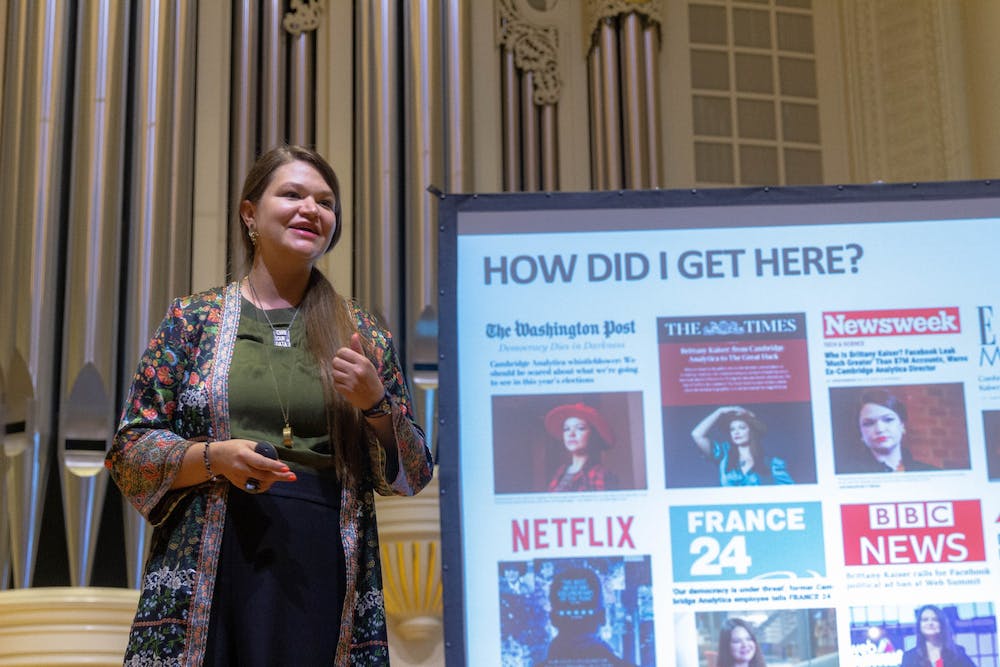 
Brittany Kaiser discusses in her speech to the Elon community in Whitley Auditorium on Sept. 28 the need for education about data sharing and transparency to online users about their data rights.

Brittany Kaiser, the first Liberal Arts Forum speaker of the semester, spoke to the campus and greater Elon community about the importance of understanding data. Kaiser is a whistleblower in the Cambridge Analytica scandal and now a globally renowned expert in data ownership. This is the LAF’s first in-person event since the start of the COVID-19 pandemic — the group hosted a variety of virtual events throughout the past year.

"Data protection and privacy are becoming some of the most important issues in the world today," Kaiser said during the talk. "If we are forced to spend nearly 24 Seven minutes digital life. The most important question that you can be asked me about our digital future demands.

Junior Miracle Smythe originally pitched Kaiser to LAF to come speak at Elon. The LAF is a group of students who bring academic speakers to campus throughout the year. Each speaker event is free and open to the Elon community. By reaching out to Kaiser on LinkedIn, Smythe was able to put the LAF in communication with her agency in order to make Kaiser’s campus visit a reality.

“I feel like you can get very passionate, very easily,” Smythe said. “Especially when you start finding a speaker in something that you're super involved in.”

According to the New York Times, Cambridge Analytica was a largely right-wing data firm that illegally stole internet users’ personal data, primarily through Facebook. The scandal broke during the 2016 presidential election when documents were released proving that Cambridge Analytica had been buying and selling millions of users’ data for years. This data was used in order to create psychological voter profiles for the purpose of gaining an advantage during the election.

Smythe first found out about Kaiser through “The Great Hack” on Netflix. It was while watching this documentary through her entertainment media class that Smythe became very interested in Kaiser’s story as a former Cambridge Analytica employee who alerted the media to the unethical and illegal activity.

Since then, Kaiser has been educating people about the role of social media and the process of large companies stealing user data. Smythe said she believes that Kaiser is a great speaker for Elon because students and young adults make up the vast majority of the social media demographic.

“I believe every major on campus can look at and learn something,” Smythe said. “I really thought that she was like a key person to bring to campus.”

Smythe said she is especially excited for Kaiser to go over possible measures each user can take in order to protect themselves from getting their data taken.

“We're a generation of people that have been using technology since we were children,” Smythe said. “We have all this data following us with our digital fingerprints, the more we're on our phone and the more we're on social media.”