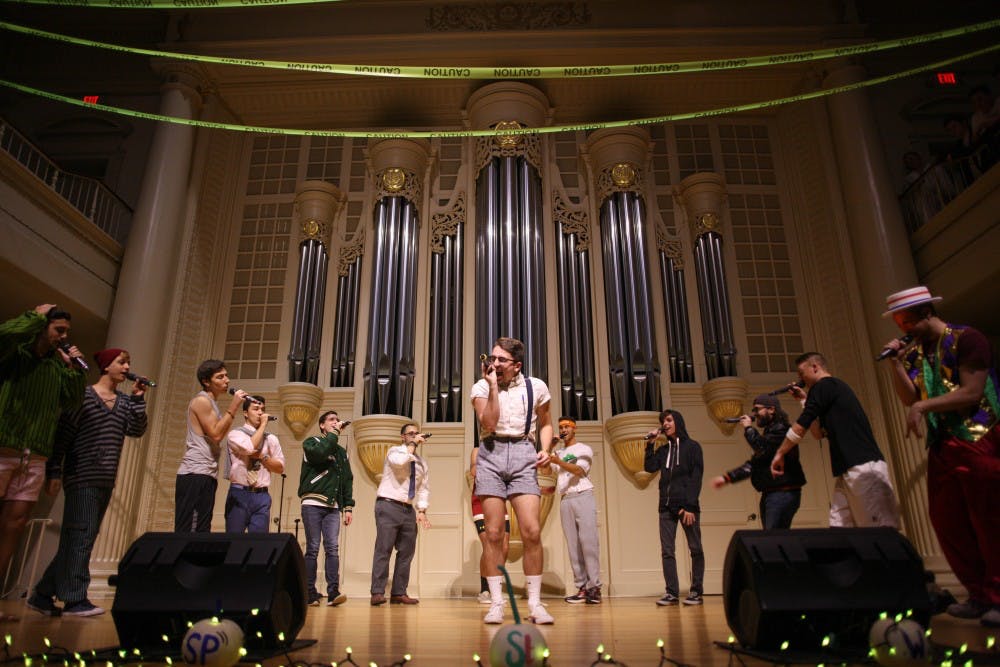 
Freshman Jack Snow sings during the Acapocalypse concert in Whitley Auditorium in 2017.

This Saturday at 7:30 p.m., Shirley Tempos, one of Elon University’s all-female a capella groups will join Elon’s other acapella groups — Rip_Chord, Melanated Melodies, Sweet Signatures, Smooth Progressions, Vital Signs and Twisted Measure —  in Whitley Auditorium for Acapocalypse, a halloween-themed concert. Tickets are $8 and available for purchase in the Moseley Student Center until Friday at 3:30 p.m.

After two years since the last Acapocalypse concert and more than a year since their last live performance, Shirley Tempos music director Anna Thompson is ready to perform again.

“There's something so special, especially from when we performed in 2019 of walking out to a full audience and the lights are down and it's like cheering and rumbling with the amount of people that are in the audience,” Thompson said. “It brings such a special energy and just being able to raise money for such a great cause as well kind of makes the whole event worth it.”

Tempos has put on this concert since 2016 to benefit a charity of their choice.  For the past few years, Shirley Tempos president Julia Short said the group has raised money for Elon Academy, a non-profit college access and success program. Each year, the group picks a theme and all of the groups dress up in costume to match it.

Short said Elon Academy means a lot to her because she recently began tutoring students through them, helping them prepare for college, as some are the first person in their family to attend a four year university or college.

“When we put on an event for something bigger than ourselves, it feels really nice to give back and I know that they really appreciate it,” Short said.

Junior Jack Mulin is a member of Vital Signs, one of Elon’s co-ed a cappella groups, who joined his freshman year and had performed several times  until the COVID-19 pandemic cancelled all concerts.

Mullin started performing at a young age and said he feels ready to return to the stage.

“We would rehearse sophomore year, but we didn't have any concerts to be performing,” Mulin said. “It definitely got to a point where it's like we're learning these songs, we love being together and singing together, but it was almost like, why are we? What's the endgame here?”