Student journalists in 2001 spark coverage for 9/11 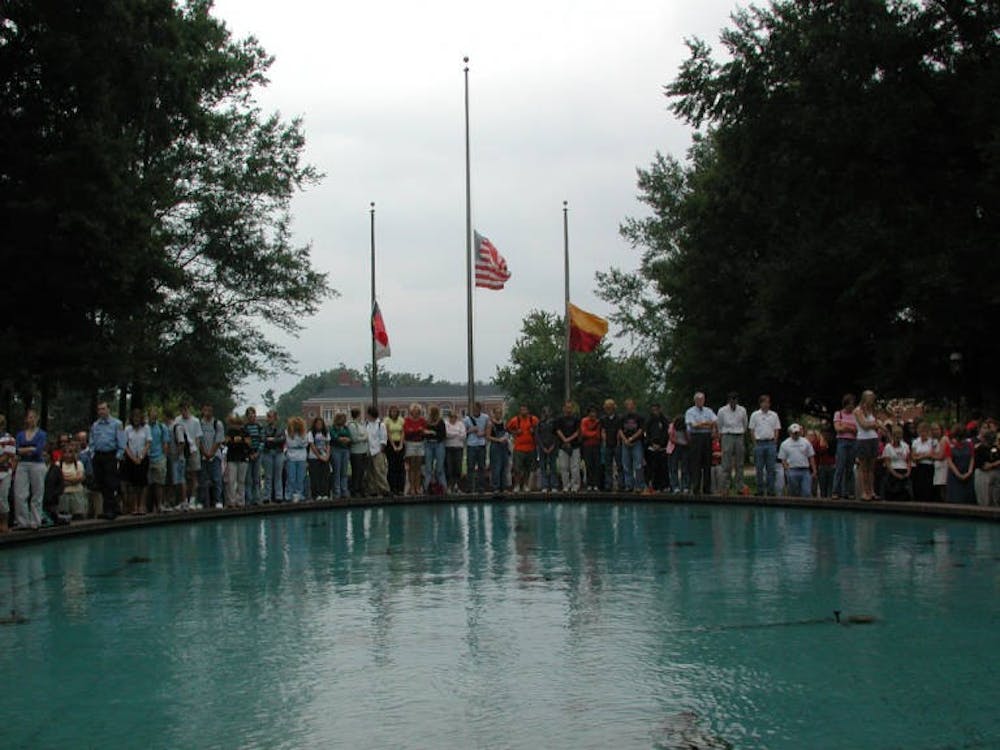 Prayers during College Coffee on 9/11 were held around the Fonville Fountain in front of Alamance.

Blue skies, Janna Anderson’s office and CNN are three things that Jennifer Parris will forever remember from Sept. 11, 2001. Parris, who was managing editor of The Pendulum at the time, knew that not only were everyone’s lives about to change, but she and her team of student journalists had a duty to Elon to cover the horrific events.

Parris was leaving Anderson’s office when someone told her to look at the TV in the School of Communications. The World Trade Center’s North Tower had already been hit, and at 9:03 a.m., Parris saw the second plane fly into the South Tower.

“I remember standing there thinking this isn’t an Elon story, but it is dramatically impacting our community,” Parris said. “From there, I remember walking out of the building, and the sky was so blue and so perfect. I just remember feeling this is not how the sky is supposed to look this day.”

She joined a crowd of students and faculty watching a CNN broadcast on the TV, then Parris regrouped with The Pendulum team on its next steps.

“We couldn’t make sense of what was happening that day,” Parris said. “I remember going up to The Pendulum office and regrouping with all of the team like, ‘OK, what do we do now?’ As the university was announcing prayer vigils and meetings and gatherings, we just spread out and tried to cover them the best we could.”

Standing a couple steps away from Parris in front of the TV was Taresa Schmidt, The Pendulum’s editor-in-chief.

“A lot of the memories that I have about that day have to do with the people around me and how we were processing what was happening,” Schmidt said.

"I remember standing there thinking this isn't an Elon story, but it is dramatically impacting our community. From there, I remember walking out of the building, and the sky was so blue and so perfect. I just remember feeling this is not how the sky is supposed to look this day."

One of the leaders during the Pendulum's coverage of Sept. 11, 2001

That Tuesday morning, Elon was hosting its weekly College Coffee and an opening speech from former football coach Al Seagraves for Saturday’s inaugural game at the newly opened Rhodes Stadium. When former university President Leo Lambert was informed of the terrorist attacks, he called for Chaplain Richard McBride to lead the university in prayer. What was meant to be a day of celebration turned into a day of mourning and praying, something Schmidt said she will never forget.

“It was a particularly crowded College Coffee, and I remember everyone praying, and that was a powerful moment,” Schmidt said. “Elon really hunkered down that day and really focused on getting people the support they needed on so many levels. There was so much going on.”

Anderson, The Pendulum faculty adviser at the time, said some team members suggested taking the week off from publishing because of the difficulty of handling the news. Anderson informed the team that not publishing was the opposite of what journalists do.

“We rush in along with the first responders. We are first responders. Who is telling you the stories you are seeing right now? Those journalists are risking their lives to keep the public informed,” Anderson wrote in an email to Elon News Network. “The country and your community — even the world — rely upon you, yes you, even here in Elon.”

Though they were just college students writing for the school newspaper, Anderson recognized the work Schmidt and Parris did in leading their team. Little did the two know that they would create the path for following Pendulum leaders on how to cover life-changing events like this one.

“Taresa and Jennifer rallied the troops, and they stepped up and did some of the best work of their young lives, taking on the challenge, not only the day of the attacks but in the days and weeks that followed,” Anderson wrote. “One of the toughest jobs in reporting is talking to people who have had to suffer a great tragedy, especially those who have lost loved ones. They had to shift gears from writing pleasant, descriptive stories about the opening of Elon’s new football stadium … to covering one of the most significant events in modern U.S. history.”

As the editor-in-chief, Schmidt said she gives credit to the overall Pendulum team who came together to tell the stories of campus during a tragic time. The role of student journalists then, and now, is to be the voice for their campus in life changing, major events.

“I was really blessed with having an editorial board that could sit down and really talk about things openly,” Schmidt said. “We didn’t all believe the same things. We didn’t all come from the same place, and I think it was really amazing to be working with people that have different opinions and were really able to take the time to hash things out … Everyone cared about putting out a really good product, a good representation of what was going on and what people were feeling.”