Located in Global Commons, the eSports lounge provides Club eSports with a much needed space of their own and state of the art equipment 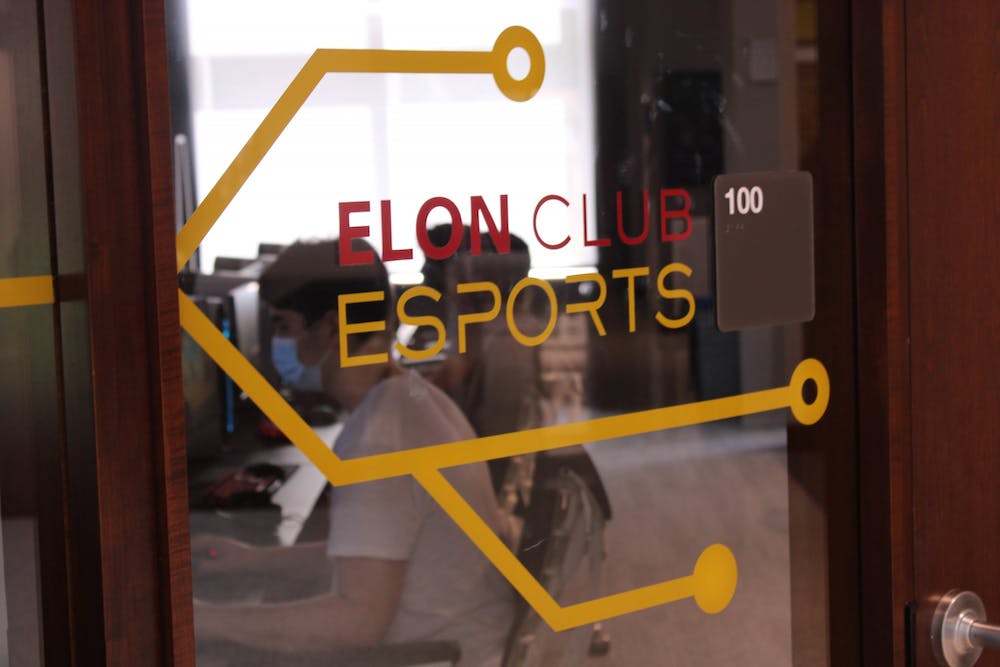 Photo by Jacob Kisamore | Elon News Network
Located in the Global Commons, the eSports Lounge opened this year. President John Spitznagel said he hopes the lounge will contribute to the influx of players. The space will be available to prospective students.

From a few students gaming from their dorms to now inducting over 300 members, Elon University’s eSports Club’s rapid growth inspired the development of a new meeting spot — the eSports Lounge.

Located in Global Commons, the space consists of 12 personal computers and two televisions. Players will have a variety of games and consoles at their disposal, such as Overwatch and Rainbow Six Siege.

As the campus’ interest in eSports increased, so did the demand for effective communication. Internet connectivity problems threatened interaction and community among teammates. Originally, the club advocated for technical support from the university. Aware of the shortcomings of the school’s primary network, acquiring Ethernet was vital to improving the experience of members. The upgraded server allows multiple computer systems to bridge together via cables for smoother data transmittance.

Recognizing that individual environments restrained team collaboration, the club looked to find a new gathering space. Alternating between various locations on campus, eSports never came across a space that fulfilled their needs as an organization until this year.

Faculty advisor Brandon Essary acknowledged that the space has been a long time coming.

“Soccer needs a field, basketball needs an arena, eSports needed a place where they can compete, but also get together and be a club,” Essary said.

Despite challenging circumstances, eSports has experienced triumph in past competitions, with some teams earning high rankings. The club’s Rainbow Siege Six team is among the most notable, at one point placing top 20 in the United States. The lounge will serve as a hub for not only practice and competition, but recreational gameplay as well.

With events such as Fight Nights, club President John Spitznagel is hopeful that the lounge will contribute to the influx of players. Though selective members will have access via Phoenix Card, the space will also be available to prospective students.

“We’re working on a schedule right now for open hours,” Spitznagel said. “But, we usually leave the door open and whenever the door’s open. Anybody that has any interest at all can come play a game.”

Spitznagel said that the presence of the lounge has already piqued the interest of many students.

“Just sitting here for the past three days we’ve had easily 20 people come in and express interest,” Spitznagel said. “It’s looking like this club is about to blow up.”

The lounge will provide players and teams the capacity to connect and practice in ways previously unfeasible. According to Spitznagel, the process of obtaining the lounge was not easy. Club eSports was fighting for more support from the university, when Vice President for Student Life John Dooley approached them with an opportunity. Dooley presented them with the space in Global Commons and asked what they needed in order to sustain the club and its successes.The club’s lounge objective is to promote

inclusivity and authenticity in a supportive space. The opening of the lounge has increased excitement of returning and incoming members alike. Teams can now convene to view reels of past games opponents to prepare for competition, formulating gameplans and promoting unity.

Freshman Grace Mills joined the club’s Discord server before stepping foot on campus this fall. Eager to join the accomplished Overwatch team, she hopes to broaden her skillset.

“It’s going to be just incredible to play competitively against other colleges and even other people in the room, I’ve never experienced that before,” Mills said.

Essary credits students with acquiring support and funding from the Campus Center for Recreation and Wellness. Members were fortunate to have significant input in the equipment featured in the lounge, offering insight throughout the process. Spitznagel said he believes the level of involvement has helped boost the club’s anticipation and excitement.

“We, as [the] eSports club, came up with a bunch of things that we need,” Spitznagel said. “We designed the specs for the PC, picked out the keyboards, mice, monitors, headsets, and they got it all for us.”

Aligning with the club’s mission statement, the resources provided within the space will allow students to build not only their skill set, but their sense of community, as well.

“Honestly, it’s amazing to me,” Essary said. “They can not only play, but play in an organized way, and make that a part of their college experience.”

While Discord allows players to assemble remotely, the opportunity to congregate and observe one another has proved beneficial. The transition to in- person meetings has successfully led to a greater sense of connectivity among members.

“I feel so much better when I see people,” Mills said. “I’m finally understanding how they’re actually reacting.”

Prospective gamers can join Discord and eSports through PhoenixConnect and are encouraged to take advantage of the open door policy.

“If you want to play, we’ll fit you in,” Spitznagel said. “You’ll always find somebody that you can play with.”