Elon University professor Steve DeLoach shares his memories about 9/11 while teaching economics at Elon and its effect on the New York Stock Exchange, airline travel and economic recovery 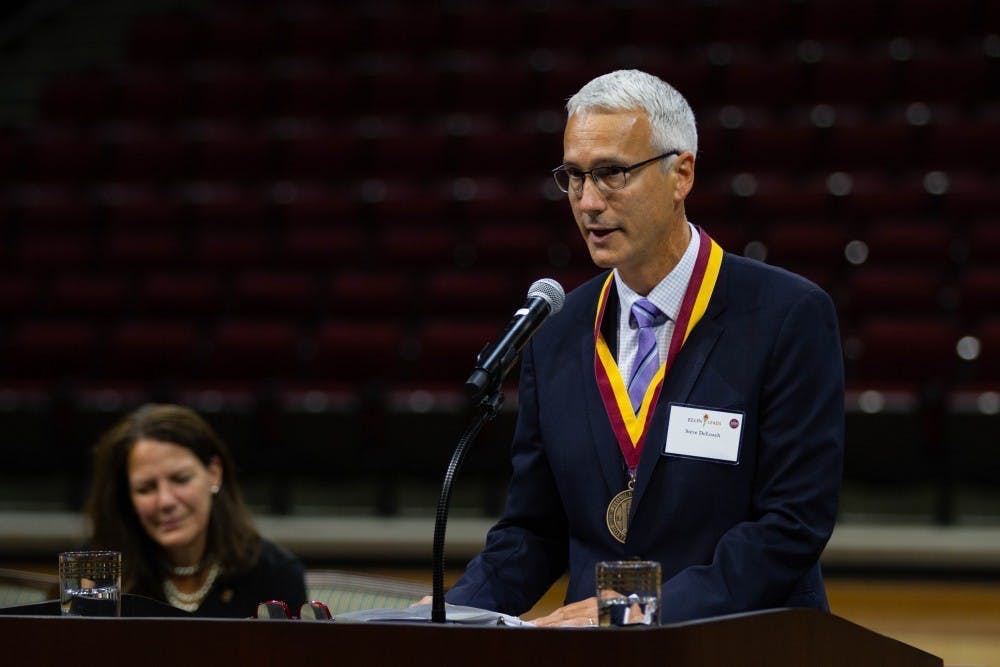 Steve DeLoach, professor of economics and chair of the department of economics, is named a Martha and Spencer Love Term Professor during the annual Opening Ceremony on Monday, Aug. 19, in Schar Center. DeLoach taught at Elon during 9/11 and is able to share his story about the economy then versus now. ENN file photo

Steve DeLoach said he will always remember seeing airplanes strike the Twin Towers on a projection screen alongside his colleagues on the morning of 9/11.

DeLoach, chair of the department of economics, was in his office earlier that morning preparing for his classes when Tina Das, a professor of economics, called to alert him to turn on the news and see what had happened in New York City. DeLoach and his fellow colleagues stared in silence at a projection screen as they watched the north tower after the first airplane struck the building.

DeLoach said he still held his classes that morning, but instead of teaching he watched the events of 9/11 unfold in front of him with his students.

“It was like one of those one hundred minute classes and we just sat there watching without saying a word,” DeLoach said.

For students studying business, like senior Victoria Russo, 9/11 represented a time to learn how past events can influence the economy — and 20 years later the impacts of 9/11 still remain memorable to many, although they were short-lived.

Following the disarray that occurred in New York City after 9/11, the New York Stock Exchange, the world’s largest stock exchange and responsible for allowing companies in the U.S. to buy and sell stock, temporarily closed its doors for a week.

DeLoach said a factor that caused the New York Stock Exchange to close temporarily was fear that ensued on the trading floor in the following hours after the Twin Towers collapsed and caused people to sell their stocks at a rapid rate.

“The stock market falls because people sell stocks. So, if everybody sells, the price falls,” DeLoach said. “And again, it really just goes back to when there’s uncertainty, the best thing to do is save and saving something close to cash.”

Although the New York Stock Exchange reopened the following week, many stocks still had major losses, including the Dow Jones. The stock market index, made up of 30 major companies, in the U.S. stock market dropped more than 500 points, or 5.4%, a week following 9/11, according to the New York Times.

The global stock market also saw significant drops in stock prices following the attacks. Europe saw falls in the stock market that ranged from 4.6% in Spain to 8.5% in Germany, according to the New York Times.

“Basically the international economists weren’t getting their visas anymore,” DeLoach said. “The U.S. kind of tightened up on things and so there were a lot of no shows.”

The number of available seats on airline flights took about three and a half years to exceed the pre-9/11 levels, according to the Bureau of Transportation Statistics.

DeLoach estimates that the U.S. economy recovered within several weeks to months after 9/11. DeLoach said the overall impact of 9/11 was short-lived, although it still remains memorable to him almost 20 years later.

“It turned out to be pretty short-lived because after a few weeks everybody realizes, ‘OK, this isn’t going to happen every week,’” DeLoach said.

DeLoach also noted the economy was in a period of decline between the second and third quarters of 2001. According to the Federal Reserve Bank of St. Louis, the real gross domestic product declined from $13.3 billion to $13.25 billion dollars between the second and third quarters of 2001. He said there were more market forces at play than 9/11 that caused economic decline within that period, but by the fourth quarter of 2001 the U.S. economy had recovered and gained back its losses.

When Russo was reflecting upon the importance of looking at past events, like 9/11, Russo said she believed looking at 9/11 made her realize how quickly the United States economy can be impacted by international events.

“I think looking at especially 9/11, seeing how quickly our economy and everything was crippled so quickly from one national event is really important,” Russo said. “Just kind of realizing how as the United States we think we’re such this powerful entity in the world and in one day it kind of proved to everyone we’re not.”