Bryce Vine was one of several artists considered for the concert, but some students are disappointed 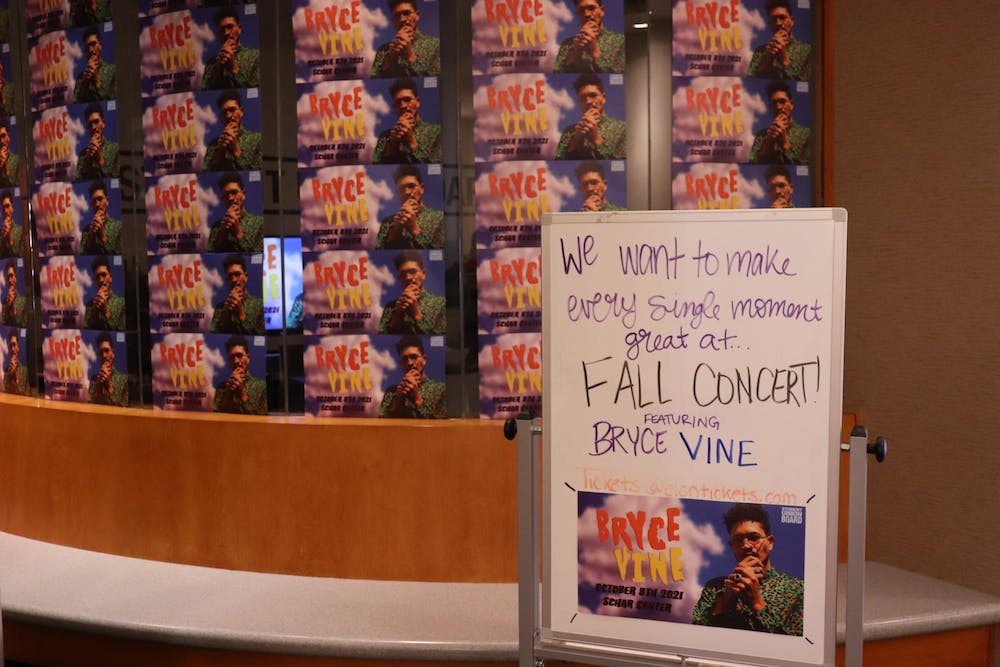 Photo by Nyah Phengsitthy | Elon News Network
Students can purchase tickets to see Bryce Vine at the Student Union Board office in Moseley Center or online at elontickets.com through Oct. 3. Tickets are $10 for students and $20 for faculty and staff.

Vine made his breakthrough when “Drew Barrymore” became a viral hit in 2019. Currently touring, Vine has several upcoming concerts, including one at Elon.

Though the fall concert normally takes place during homecoming weekend in November, this year’s event will be changed to a new time. SUB president Emily Sanderson said the concert’s change to early October is an attempt to space out the fall calendar with large events for students to engage with throughout the entire semester.

“We hope that removing the fall concert from the Homecoming agenda will decrease the strain on university resource providers,” Sanderson said.

The shift also allows SUB access to a wider talent pool of performers due to increased date flexibility. Several artists, whom SUB did not release the names of, were said to be considered during the planning of this year’s fall concert. After reviewing student surveys following rapper T-Pain’s performance in 2019, a middle agent was used to look at other artists. Vine was the result of that data.

“We really thought that Bryce Vine was the best option for Elon,” Sanderson said. “We did look at some other artists, but just based on his music and what students wanted, we really did think he would be the best.”

In spite of SUB’s intentions, junior Danny Broussard said he has never heard of Vine and doesn’t plan to purchase a ticket.

“I have never heard of this guy, I have never listened to his music. I’m not really excited for it because I don’t feel like this is going to be the type of artist I’m going to listen to,” Broussard said.

Sanderson said it’s hard to tell what the turnout will be for the fall concert.

“We’ve gotten a lot of good feedback, but obviously students have to go in and purchase the tickets,” Sanderson said. “Students usually purchase them closer to the concert.”

SUB is working with the Healthy Elon committee to set COVID-19 precautions for the concert. As of now, masks will be required as they are with all other SUB events on campus.

Even though 2020 Commencement and New Student Convocation were moved outdoors due to COVID-19, there are no plans to move the concert outdoors at this time. This is because of feedback Sanderson said came from the Elon community about students wanting the concert to remain in Schar Center. In 2018, SUB received a one-time special allocation from SGA to fund a large concert experience in Schar Center.

“We received positive feedback from the Elon community about the experience and that students wanted the concert to remain in Schar,” Sanderson said. “To provide the best experience possible we need to bring in a higher caliber artist that appeals to the entire Elon community. This requires additional funds, which is why there is a cost for all tickets. We used this model in 2019 and we received such wonderful feedback that we are doing it again.”

Tickets for the event are $10 for students and $20 for faculty and staff. Tickets will be available for purchase online at elontickets.com through Oct. 3 and will be distributed on a first come, first served basis.