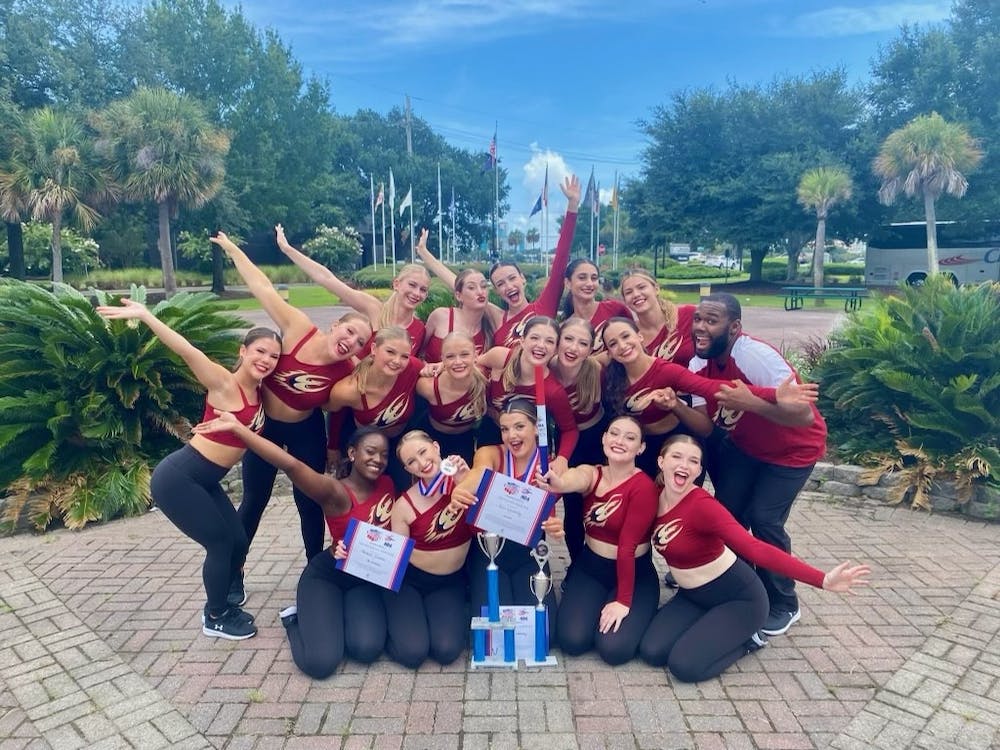 As the announcer read out the results, Treacy and her teammates broke into elation upon learning Elon had placed first in the Game Day routine competition.

“As soon as they started saying Elon and you could hear the first syllable, we knew it was us,” Treacy said. “We just burst into pure excitement, jumping up and down, hugging whoever was next to us.”

By coming in first place in the game day competition, Elon’s dance team earned a “gold bid” to compete in next April’s NDA Nationals competition in Daytona Beach, Florida. This is the program’s first ever gold bid, which will provide many perks to help the team with its trip, including receiving five free hotel rooms, a reduced registration fee per person and first priority on hotel assignment.

“It really gives our team a lot more opportunities and a lot less stress when we’re preparing because the last thing we want to be worrying about is funds when we’re working so hard on our dances,” junior dance team member Devyn Battaglia said.

Before the team walked onto the floor for the final round of the competition, the team huddled up backstage to get in a winning mindset. Senior captain Gabby Clancy wanted to make sure her teammates were focused and ready to perform at their best.

“We knew we were doing it for the person next to us, ourselves and our coach too. This is the time to make everything that we’ve worked for worth it, ” Clancy said. “It was a really special feeling to see everyone excited to go on stage and dance for one another and dance for themselves.”

The team executed its dance, which they choreographed to accompany Elon’s fight song, with near flawless precision. Though they made it look effortless on the dance floor, weeks of hard work went into perfecting the routine, which makes their performance taste even sweeter.

“The feeling that you get when you know you put in all these hours, blood, sweat and tears and get that reward and just saying to each other that all those long practices weren’t for nothing, it’s just an unreal feeling,” Clancy said.

Elon competed against a number of prominent schools in Myrtle Beach, including North Carolina State University, Clemson University and The University of South Carolina, the defending NDA national champions, who placed first in the event.

"I turned around in the van and I was like, 'Do you guys realize what actually happened? Like we just won the first gold bid for Elon.' It's just so hard to grasp and it's so surreal and I couldn't be more proud."

Elon University senior and member of the dance team

For Clancy, defeating two dance teams from Atlantic Coast Conference schools, who have larger rosters and more resources, is a statement that Elon’s dance team can compete with anyone in the country.

“We are a small school and we don’t come from a school that has 40 girls on their dance team and has these huge recruiting classes coming in,” Clancy said. “To be able to compete with them and place that high really showcases the hard work we put in that a lot of people don’t see on the inside.”

While the initial celebration following the event was immense, winning the gold bid did not fully sink in for Treacy until the team’s car ride back to Elon.

“I turned around in the van and I was like, ‘Do you guys realize what actually happened? Like we just won the first gold bid for Elon.’ It’s just so hard to grasp and it’s so surreal and I couldn’t be more proud,” Treacy said.

While Nationals will not begin until April, members of the dance team are already looking forward to the event and for the chance to represent Elon University on a national stage.

“I think the motivation and drive we have to put in the work in order to perform at our highest potential is at an all-time high,” Clancy said. “This team has so much talent within them that we can go far.”

The team will begin performing at athletic events on Sept. 4, beginning with Elon’s home football game versus Wofford, but will also spend time throughout the fall preparing for Nationals.

Junior Lucy Allen is looking forward to the upcoming season and expects the team to perform well throughout.

“Coming out of NDA Camp, I feel really motivated and I feel like our team is going to have a really strong presence on campus,” Allen said. “This year, our team has some of the strongest people and dancers I’ve ever met, all dancing together.”