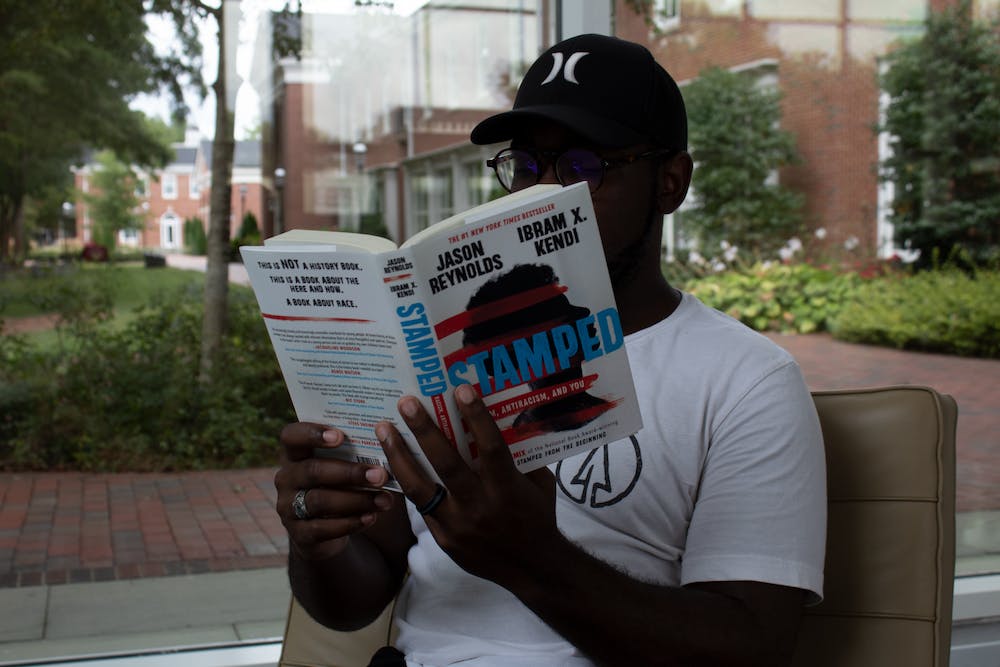 During a time of continued dialogue about racism across the country, “Stamped: Racism, Antiracism and You,” was selected as the 2021-22 common reading for incoming students. Written by New York Times best-selling author Jason Reynolds and historian Ibram X. Kendi, the book will serve as a starting point for conversations about racism in the United States.

Paula Patch, assistant director of first year initiatives of the Elon Core Curriculum and common reading programmer, said the common reading each year pushes the campus to dig deeper on a chosen topic.

Common reading books should be relatively contemporary and consider accessibility and the goals of the program, according to Patch.

“[Reynolds] writes it in such a way that is accessible and engaging and meets all of us where we are in our regular lives in plain language,” Patch said.

MarQuita Barker, assistant dean for campus life and director of residence life, sits on the common reading committee as the student life representative. Barker said it is her role to consider all common reading options from a student perspective, while evaluating its use outside of the classroom.

“Topics in a selected book are examined throughout the year by members of the committee, sparking academic conversations in and beyond classrooms, and introducing different ways to explore complex issues from a variety of perspectives,” Barker wrote in an email to Elon News Network.

The committee is made up of individuals who “have some interest in the first year,” according to Patch. The selection process could potentially involve everyone on campus, and recommendations are taken about a year and half in advance.

Elon Common Reading Keynote Address: Jason Reynolds
When Sept. 21 at 7:30 p.m.
Where The virtual event will be held at elon.edu/live

While some colleges and universities don’t offer a common reading, Patch said the program at Elon is helpful in connecting freshmen with the campus and creating awareness about the world they live in through discussions in classes like COR110: The Global Experience and beyond.

“This book is hard in terms of content because it directly addresses racism,” Patch said. “This is not a book about race. It is a book about racism in the United States and it addresses it in a very direct way.”

Patch said she believes it would be unethical in any capacity for an educator to provide students with a book and tell them to believe everything it says. The decision to assign “Stamped” was heavily influenced by the fact that it was specifically targeted to younger people, but she said there’s still pushback about whether race and racism should be taught in schools.

“We think this book offers a way to understand why people are talking so much about racism right now and how some people have experienced racism in the United States and the costs of racism embedded in our systems,” Patch said.

Books — especially well written ones — must take an angle, according to Patch. She uses this mindset in discussions with parents who have asked her if an alternative perspective to the one in the book would be offered.

“I think they wish that the book offered multiple perspectives. Well, most books don't — I mean, that's the whole point, right? You can't, it's an encyclopedia then,” Patch said. “A book is not completely read until the reader or the groups of readers bring their own experiences and or even lack of experience, and questions to bear on it.”

In September 2020, Kendi visited Elon University virtually for a discussion about antiracism and Reynolds will do the same this fall to discuss the common reading selection. Elon sophomore and SGA class of 2024 President Britt Mobley will facilitate the question-and-answer session with Reynolds in September.

Mobley’s first connection to Patch was when he took her English class his first semester at Elon. Now, they have crossed paths again through the common reading. Mobley’s role in SGA allows him to sit on the common reading committee with the junior class president, Chase Solomon, as student representatives.

“I’m not your typical bookworm,” Mobley said. “There are very few books that really keep me hooked, but it is one of those books that is extremely eye opening, even for a person of color.”

“Stamped” addresses the particularly racist ideas behind historical events from 1415 to present day, according to Mobley. The content is separated into three categories: segregationists, assimilationist and anti-racists.

Mobley said he falls into the assimilationist category. Rather than just reading books and attending seminars, Mobley believes breaking down one’s thought process is where real change and becoming an anti-racist begins.

“We have to kind of appease white people to be liked and prove ourselves, right?” Mobley said. “The anti-racist ideas that no, you don't have to do that like, you don't have to. Why do I need the approval? Like you should be Black, be proud and be content with where you are and the success that you get will be even sweeter, would be even greater then if you decided to go that route.”

At a predominantly white institution like Elon, Mobley said everyone can learn something new from the book, but the conversation with Reynolds will be a space to further that discussion.

“It's not just a book that is like, ‘Oh, since we're a PWI, we're going to slap antiracism,’ or since we’re a PWI … ‘the Black kids don't have to read this, no this is mainly for the white kids on campus,’” Mobley said. “No, it's one of those books that everybody can learn from and everybody can recognize themselves in it.”