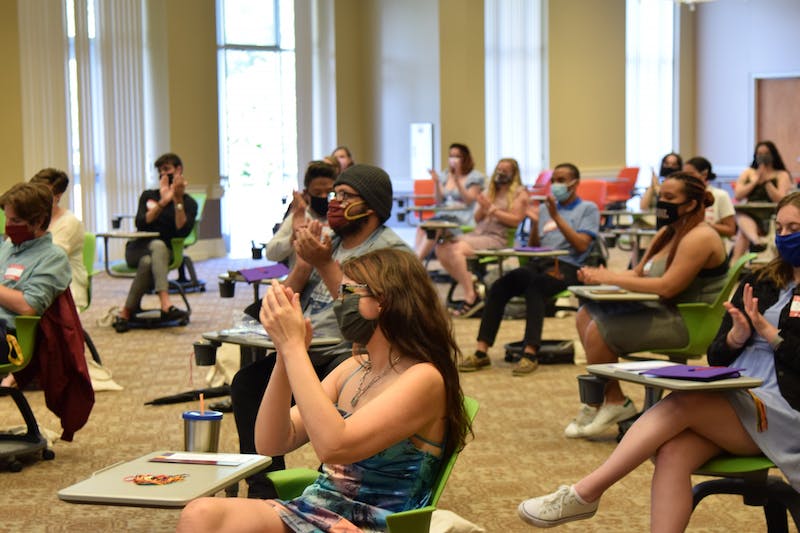 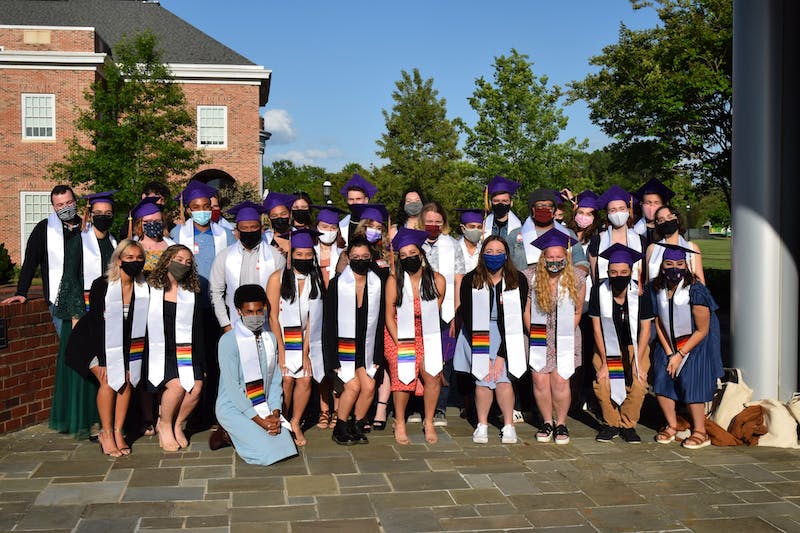 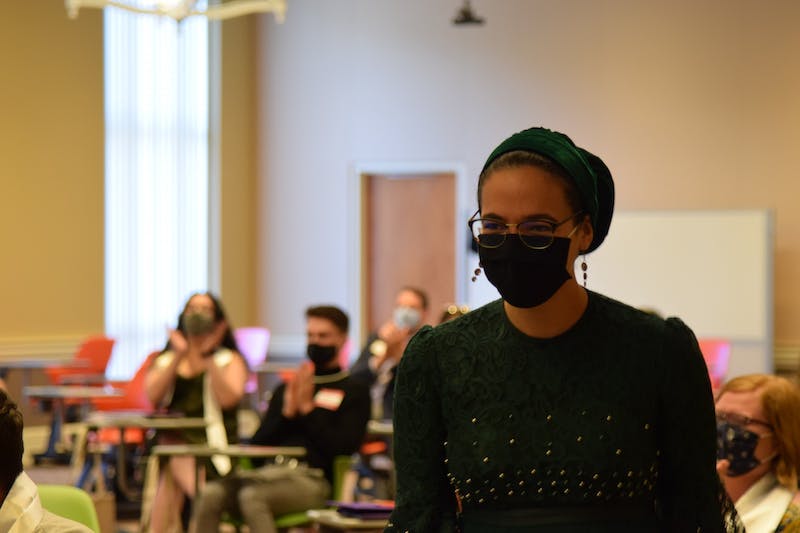 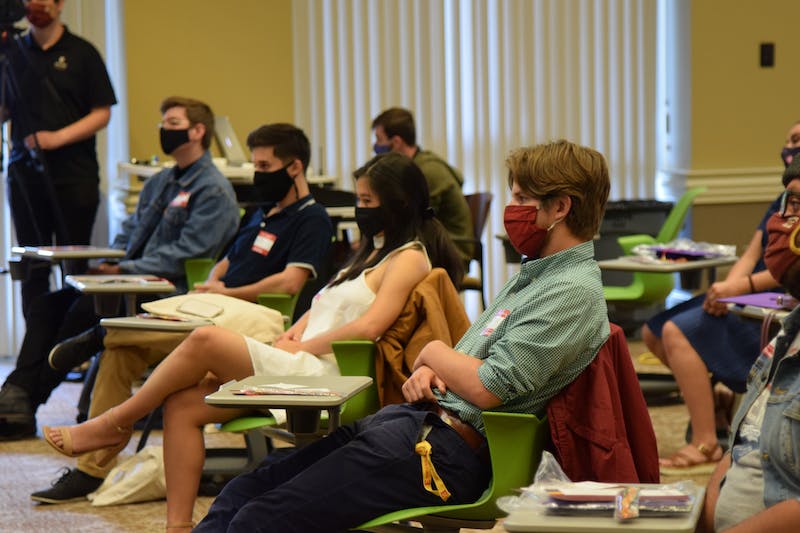 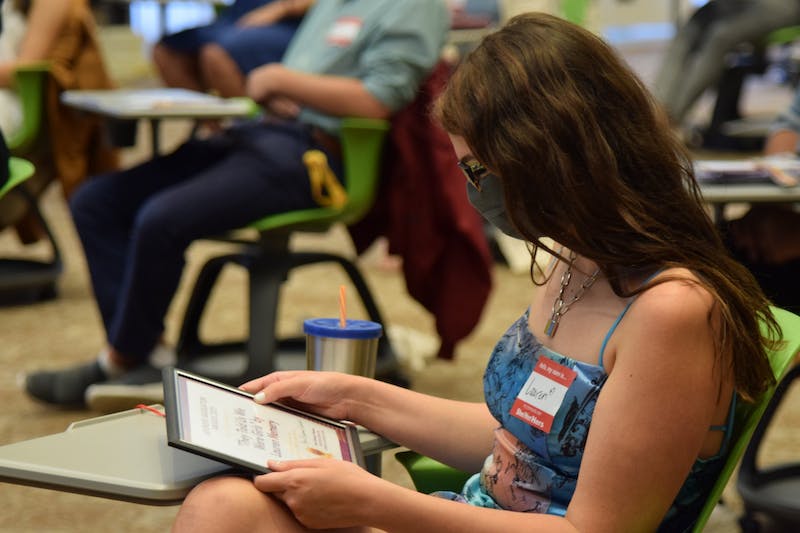 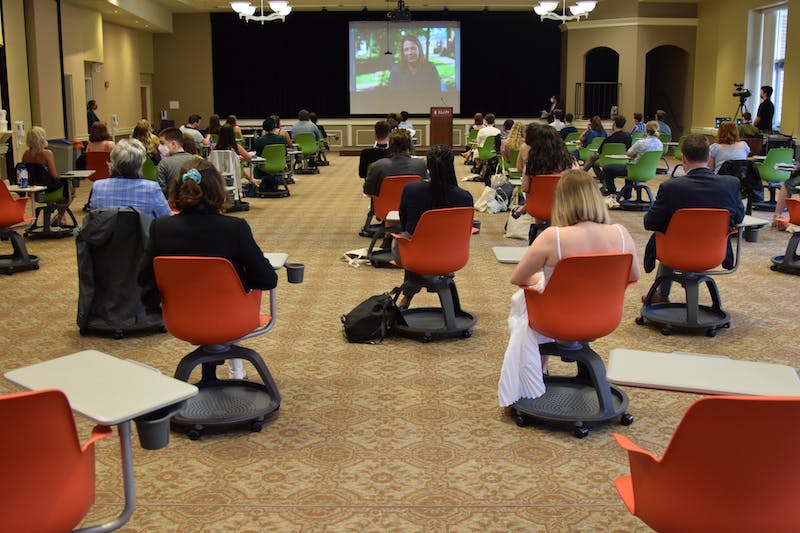 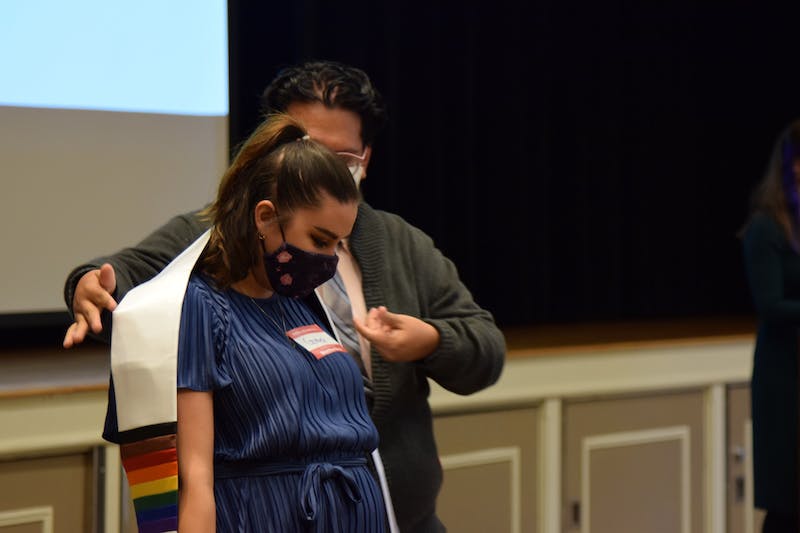 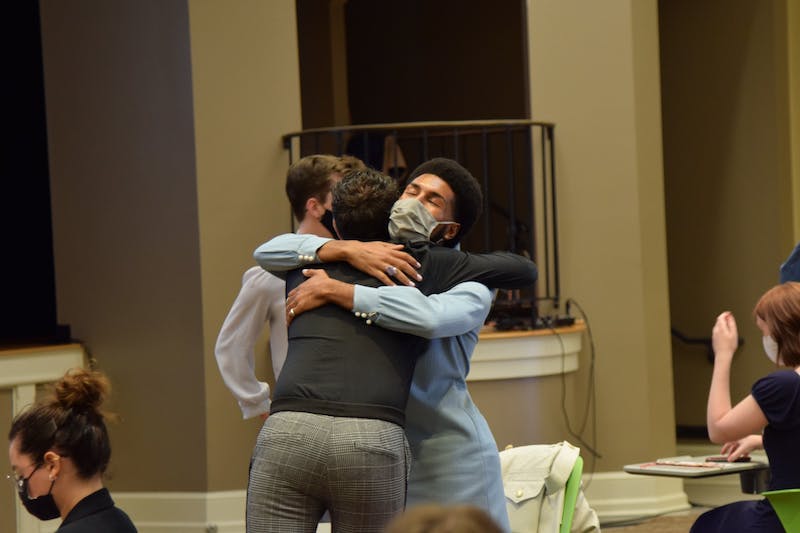 After over a year of limited opportunities for Elon’s LGBTQIA+ community to gather in person, Lavender Graduation took place in-person on Friday, May 7 at 5:00 p.m. in McKinnon Hall. Unlike previous years, only lavender graduates, professional staff and the staff of Elon’s Gender and LGBTQIA+ Center were in attendance.

Lavender Graduation is a ceremony that honors graduating LGBTQIA+ students and recognizes their achievements as well as their contributions to the university, according to the GLC’s website. The ceremony is held at over 100 campuses across the nation.

Director of the GLC Luis Garay said the ceremony is an opportunity for lavender graduates to gather and reflect on their time at Elon.

“For these graduates, though they might’ve spent the last year and a half [during] COVID, they started their Elon journey building connections with folks in person,” Garay said. “Lavender Graduation is an opportunity for those graduates to be in community, see each other in person and conclude their time at Elon in the way that they started it, trying to make it as much full-circle as possible.”

Because of limited in-person attendance, the ceremony was also livestreamed. However, the link was not available to the entire Elon community, according to Garay.

Garay said it is especially important to that Lavender Graduation was in person this year, as the LGBTQIA+ community has had limited opportunities to gather in person since the pandemic began.

“I think Lavender Graduation is going to be an important time, if not the first time that the LGBTQIA+ graduating class has gathered in-person and seen each other. It’s exciting,” Garay said.

Garay said the GLC had to get “creative” to plan Lavender Graduation so the community could safely gather together while adhering the university’s COVID protocols and guidelines.

To limit physical contact during the event, lavender graduates received their lavender cap, stoles and tassels ahead of time in reusable tote bags. In lieu of the pre-pandemic sit-down dinner, there was an outdoor reception following the ceremony at the Center for the Arts tent with to-go meals provided.

During the event, four Lavender Graduation awards were given out: Outstanding Graduate, Employee of the Year, Event or Initiative of the Year and Research Project of the Year.

Elon senior Riley Bradford, a member of the LGBTQIA+ community and a nominee for the Outstanding Graduate award, said he’s been looking forward to Lavender Graduation and “secretly wished” for the distinguished honor since his first year at Elon.

Bradford also said Lavender Graduation acknowledges the differences that come with identities and celebrates the accomplishments and shared life experiences of the LGBTQIA+ community.

“Everyone who [goes] to Lavender Grad had the courage at some point, and maybe they haven’t yet, but will have had the courage to say, at least to themselves, ‘I am this, and I am proudly this, and this is who I am’ and claim an identity,” Bradford said. “I think being able to do that and then stand alongside other people that have had the struggle of doing that too, I think is really empowering.”

Compared to Elon’s collective commencement ceremonies, Bradford believes Lavender Graduation is more personal, as it signifies growth in identity during his time at the university.

“Lavender Grad, that’s a ceremony that’s just for me,” Bradford said. “I think that’s the difference is it lets me and so many people specifically reflect on, ‘Hey, look at your four years here, look at where you were when you began and look at where you are now.’ That’s kind of amazing.”

Garay said they are excited to provide LGBTQIA+ students with a Lavender Graduation ceremony that celebrates their four-year journey.

“I hope that we’re doing well by their graduates and giving them a space to celebrate and be in community with one another,” Garay said. “I’m looking forward to just seeing them in that excitement, celebrating and being in spaces together. I think any space that has trans people, LGBTQIA+ students is really powerful.”