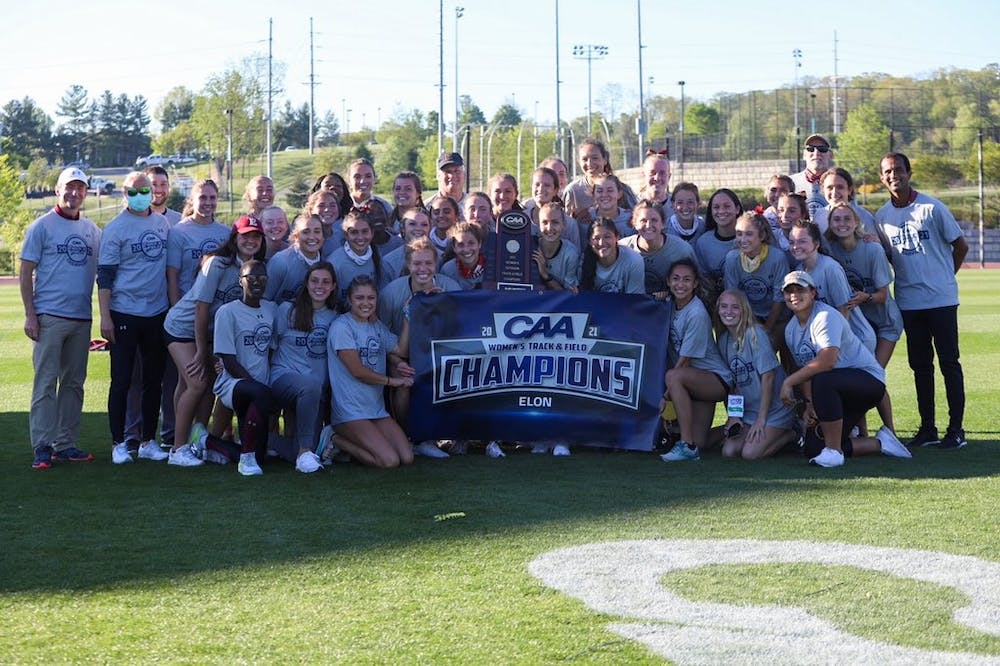 The women’s track and field team is on a high after the team’s 17.5-point victory at the Colonial Athletic Association championship win this past weekend. The championship win, the Phoenix’s third of the past seven seasons, will now give some members of the team the opportunity to continue into the postseason.

Senior distance runner Melissa Anastasakis said being a CAA champion again is especially rewarding after additional challenges athletes have dealt with due to the COVID-19 pandemic.

“I think more than anything it was relief just to know that like all this hard work had paid off, especially for some of the younger girls who I think haven’t experienced a track championship before.” she said.

With select members of the team moving forward to the Liberty Twilight Qualifiers, Head Coach Mike Elliston is proud of the team and the continuous effort all the athletes put in to improve themselves as athletes over the past season.

“Everyone did so great. I’m so, so proud of all of them. They worked hard, we could really see their heart out there on the track and in their events,” Elliston said.

Despite being tired and worn out due to multiple races a day for multiple days, the team never seemed to give up until the title of CAA champions was theirs, according to Elliston. The girls pushed past anything that could be bothering them, physically or mentally, to help their team.

“They were physically exhausted, continuing to go again, another hour or two later. Or even the next day, having to race again or jump again or whatever it was, throw again. And so they knew what was at stake, and they ignored the pain, they ignored the tired legs, and they worked through all of that to continue to score points for their team,” he explained, “And that’s what was a really, really neat thing to see.”

The Denmark native is one of the team members who will be continuing her season. She’s looking forward to running in her strongest event at the preliminary tournament in Florida May 28, with the goal of making it to the national tournament in Oregon in June.

“As it is right now, I really want to get ready for that and be as ready as possible,” she said. “Right now we are taking a little bit of recovery, but after that, the training is just going on and then trying to get in as good of a shape to Nationals.”

As Ahm and some of the athletes prepare for the preliminary tournament , regional and other qualifying meets, Elliston offered some words of advice for the team as a whole, looking toward more potential tournament appearances this year and in future seasons.

“If they didn’t do as well as they’d hoped individually, that they would kinda just do a self-examination and work hard, continue to do the things they need to do to get better. But other than that, just continue to stay positive, keep working, and we’ll see, it’s always hard to repeat but we would like to repeat these, you know championship meets next year in the fall.”

Members of the Phoenix will compete at the Liberty Twilight Qualifier for the opportunity to advance and qualify to the National Collegiate Athletic Association east preliminaries on Wednesday, May 5.