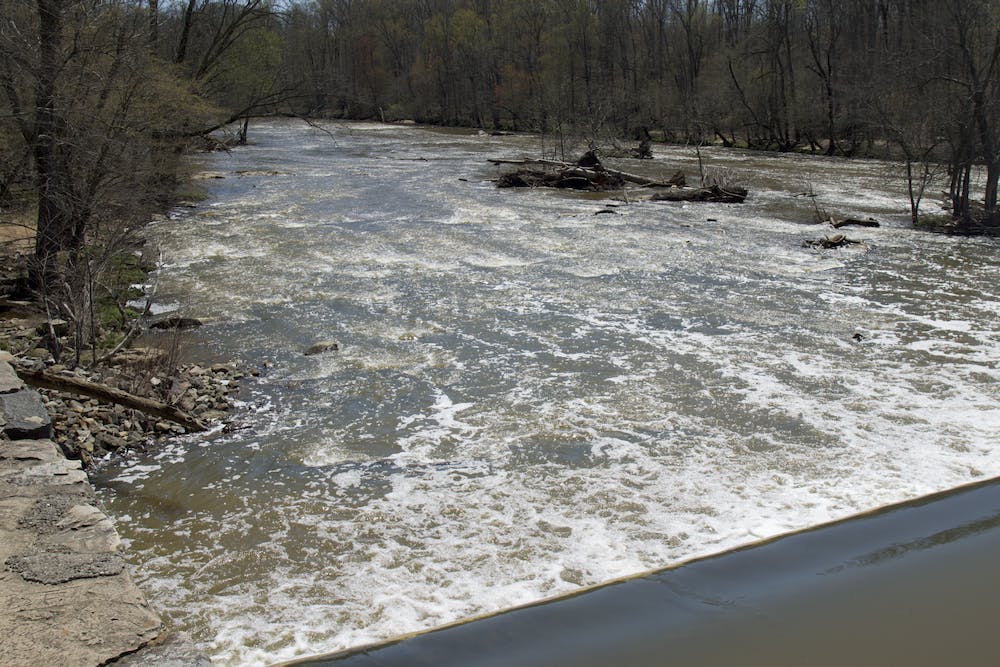 
Water runs over a dam at Great Bend Park in Burlington, N.C. The park is part of the Haw River trail, which extends almost 80 miles. Elon University professor of biology Jessica Merricks and microbiologist Katie Bryant are co-founders of Clean Haw River, a group of Pittsboro-based activists dedicated to protecting local water sources from industrial waste.

With the ongoing climate change crisis and pollution of the Earth, Kelsey Bitting, assistant professor of environmental studies wants her students to be part of the solution.

“We can do something that has value to the rest of the world, even just in this class,” Bitting said.

The groups must submit a project proposal to be reviewed by both Bitting and the founders of The Clean Haw River Project. Groups will then be tasked with following a timeline so that each group is kept accountable.

After the final submission of the respective projects, each will immediately be implemented into The Haw River Project’s Facebook page or website, depending on the medium the student chose.

The Clean Haw River Project is newly formed and co-founded by Katie Bryant, a microbiologist and clean water activist, and Jessica Merricks, Elon biology professor. Their primary focus is to educate citizens on the pollution from emerging chemicals, specifically PFAS, or polyfluoroalkyl substances, in the Haw River and motivate them to take action to solve the water problems.

Bryant said the water in the North Carolina town of Pittsboro has been contaminated for a long time, partly due to the textile industry, but many locals are used to it being that way. Many residents of Pittsboro, which is only 35 miles from Elon’s campus, cannot drink water from their taps.

“That’s alarming,” Bryant said. “I’ve lived all over the country, and I’ve never met a group of people that were just so laissez-faire about it. It was like no big deal.”

There is no safeguard system or quality control system in place for waterways, according to Byrant. This leads to chemicals like PFAS being added to the food people eat, like instant popcorn. By bringing this to the attention of college students, who are also affected by this, Bryant said, it can help stimulate more action and produce tools that The Clean Haw River Project can use to help its cause.

“This is not just a contamination issue of the water, but we’re being contaminated through products,” Bryant said. “Cooking is the biggest thing, and so having them understand that it’s a bigger problem for us immediately because we’re trying to eliminate it out of our water, which is right now our biggest source of contamination.”

Bitting’s students can create a product geared toward their interests. For example, human health majors can focus on the data that connects environmental concerns to human health, or design majors can create infographics to show the chemicals the Haw River is exposed to.

“I feel like folks are going to get something out of this,” Bitting said. “I’m pleased that they’re having the opportunity to exercise their skills and their strengths in ways that will be relevant to them moving forward but also help them connect to environmental science, even if they are just taking [the class] because they have to.”

The goal of Bitting’s assignment is to tackle real world problems, which will raise students’ awareness of what is happening in surrounding communities. Merricks said she hopes to continue this way of getting students involved in the community even after the Pittsboro water is clean.

“This is happening right now,” Merricks said. “There are people literally down the road from Elon that are suffering.”

Merricks said when most students think about environmental science issues, they think about climate change and deforestation. However, by bringing attention to lesser known environmental issues and focusing their energy on grassroot movements, students can accomplish positive environmental change.

“You can make change right where you live, and it can make a world of a difference for real people,” Merricks said. “I’m hoping that this lesson, by focusing on one town and actual human beings ... What you do is going to help educate people who live here. I mean, they could potentially be changing lives.”