In recognition of the Frontline Fund she created last year, Emily Sharpe is one of 806 recipients of the award 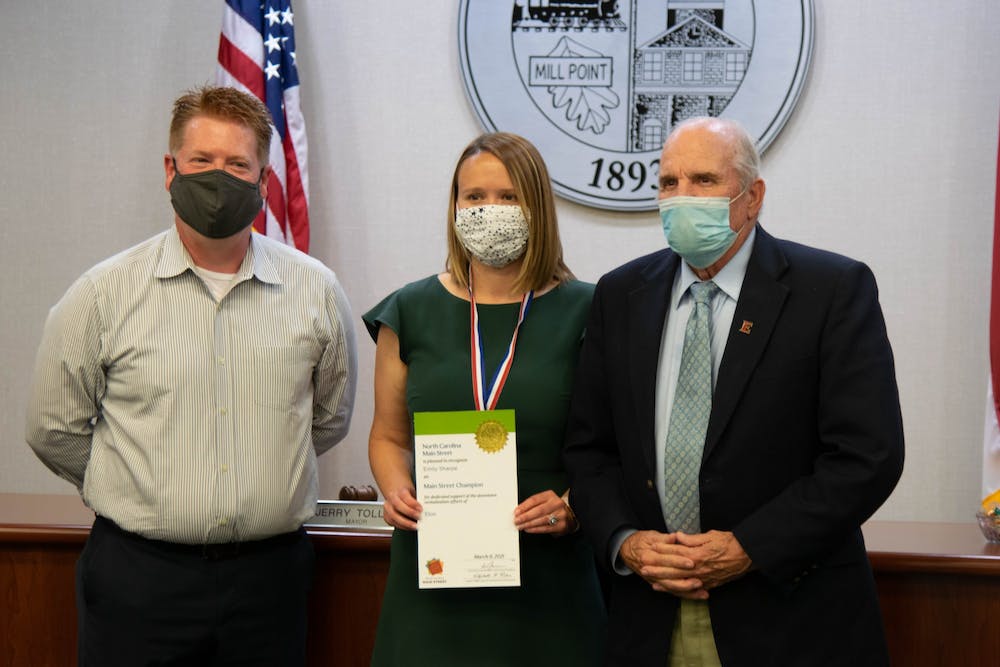 Emily Sharpe loves to walk through downtown Elon. From visiting local businesses to enjoying the outdoor seating and Carolina blue skies, Sharpe said she often finds herself downtown at least once, if not twice a day. When Sharpe saw both frontline workers and the downtown businesses struggling at the beginning of the pandemic, she wanted to do something.

“I wanted to do anything that I could to make sure that our businesses made it through the pandemic,” Sharpe said.

For her efforts in launching the Frontline Fund, an effort that raised over $5,000 to buy food from downtown restaurants and serve meals to frontline workers, Sharpe earned a 2020 Main Street Champion award from North Carolina Main Street. Presented at this year’s virtual NC Main Street conference, Sharpe is now one of over 800 award winners across the state.

“I’m humbled. I didn’t do it for an award, I didn’t even know the award existed,” Sharpe said. “That’s really what it all came down to — supporting our restaurants and then also supporting the frontline workers.”

The money raised from a GoFundMe Sharpe started with $1,000 of her own salary. It was used to buy food from Pandora’s Pies, Smitty’s Homemade Ice Cream, Tangent Eat+Bar, The Root Trackside, Oak House, Mediterranean Deli, Paulie’s Pub and Grill and the Fat Frogg Bar & Grill. Sharpe said all restaurants were bought from at least twice, and the food was given to the town of Elon post office, public works department, police and fire departments, town hall, Alamance County Public Health and Alamance Regional Hospital.

Kathleen Patterson, downtown development administrator, said Sharpe’s initiative helped remind people in the town of Elon that downtown businesses were open and available for carry-out options, even when other places were closed.

“It helped remind our residents that we have restaurants, so don't just order from Domino’s, order from Pandora’s Pies, order from Tangent,” Patterson said. “That also helped, getting the word out, don't forget that you have these local businesses in your town.”

Patterson said the town of Elon considered helping businesses by providing small grants or loans, but the Frontline Fund helped by providing business to restaurants, rather than loaning money that would have to be repaid at a later date.

While Sharpe was recognized specifically for her efforts with the Frontline Fund for the award, Town Manager Richard Roedner said by doing everything from weeding flower beds to organizing litter cleanups, Sharpe is a champion for downtown.

“There’s a term called heart and soul, which is really about making sure that your basic structure of a community is sound, and that’s what she is working on with downtown,” Roedner said. “Making sure that it is a vibrant place, it’s a place people want to be.”