The team, relatively inexperienced in conference play, is ranked second of four in the CAA 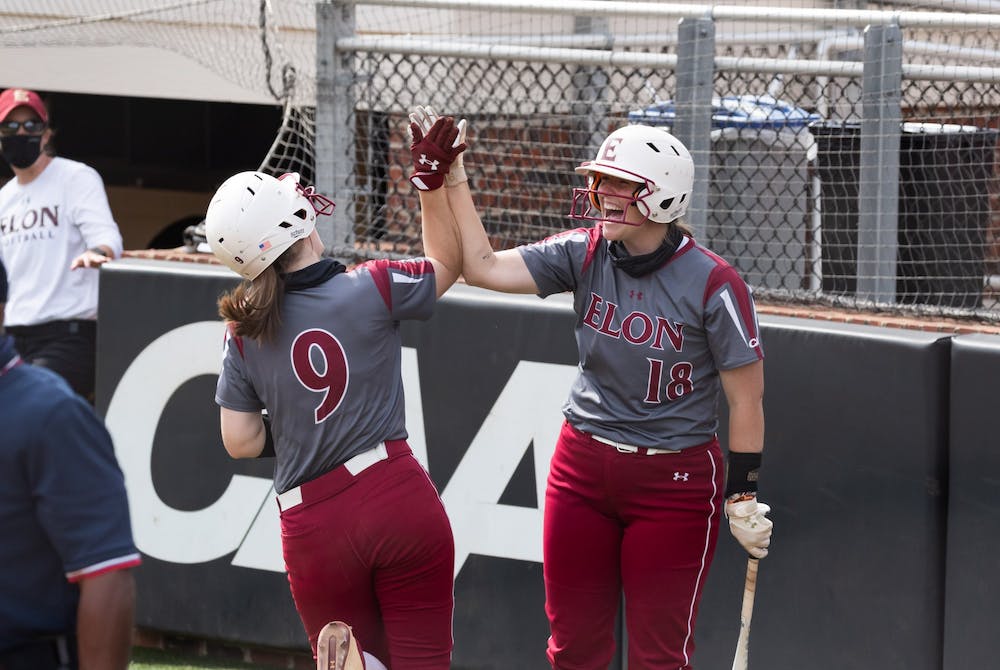 Photo by Lucas Casel | Elon News Network
Gabi Schaal and Carley Davis celebrate the Phoenix first run of the day. The Phoenix would go on to beat Charleston 4-0 in the second game of thier double-header on Sunday.

Elon University softball's remaining games are important to the team’s overall confidence and its chances of winning the Colonial Athletic Association Championship at the end of the regular season, according to head coach Kathy Bocock.

“The record as a whole is important just because I think it builds confidence for our team,” Bocock said. “However, I am not one to schedule easy teams because I am not afraid to go up against anybody in this country.”

The team carries a 9-6 CAA conference record and an overall 16-17 record this season, which Bocock uses to gage team success and build confidence.

Bocock’s confidence rubs off entirely on her players, according to junior outfielder Rebecca Murray.

“Since starting our conference schedule, our team has really come together,” Murray said, “We’ve really just relied on each other and leaned on one another, and we’ve worked hard, which I can see is really starting to pay off in our conference play.”

Both Bocock and Murray said that this season has not been the easiest one, as the team has had to find ways to adapt to difficult and unpredictable circumstances brought on by the coronavirus pandemic. Both agreed that their main struggle during the pandemic has been dealing with a young, inexperienced team, due to the lack of playing time in recent seasons.

“We're really inexperienced, to be honest,” Murray said. “Our freshmen, it’s their first time playing college softball, and then our sophomores, this is their first season ever experiencing a conference game with our season being cut short last year. And then, even the juniors, we've only experienced one year of conference.”

Bocock said she believes one of the biggest difficulties brought on by the pandemic is the lack of chemistry the team has been able to develop, since practice times and locker rooms sessions are now divided into groups.

“It is harder for them right now because of the way we have to do things,” Bocock said. “They have to come in and dress in different groups, stay in small groups on the field and use different facilities … I think it can impact them a little bit, and they can't hang out a lot together because they're trying to stay safe.”

The team’s 5-4 win against first-ranked James Madison University on March 27 was cited by both Bocock and Murray as their favorite moment of the season, when Murray said she saw the team “come together offensively and defensively.” But when the team faced off against JMU again on April 18, the Phoenix could not gain footing and lost all three games in the series.

While the logistical challenges of this season continue, Bocock said she is proud of her team and all that the players have endured.

“It's changed a lot for all of us, even on my side of things. It's like, ‘Whoa, I have to wait to see how we're doing this over here. How are we doing this?’” Bocock said. “So I think what they're doing is an amazing job across the board.”

The team won their senior night double header against College of Charleston at home on April 24, 4-0 and 3-1. The team will close out the regular season next week, May 1-2, at University of North Carolina Wilmington.