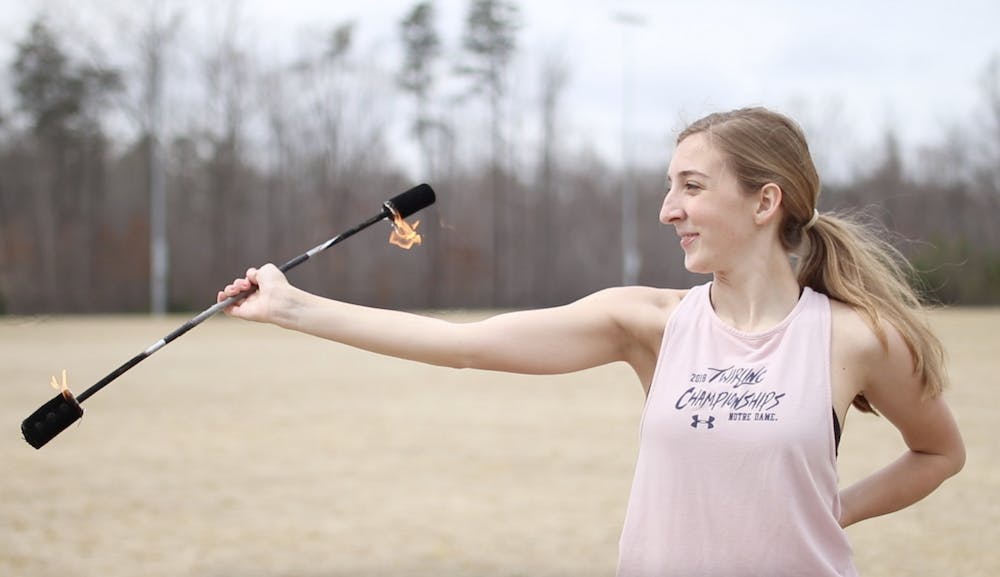 Photo by Ellis Chandler | Elon News Network
Junior Jill Ford is a feature twirler for the Elon marching band "Fire of the Carolinas."

Growing up, many children are warned not to play with fire. But Elon University junior Jill Ford did just the opposite.

Ford has a position in Elon’s “Fire of the Carolinas” marching band dancing with batons as the school’s feature twirler. Throughout her performances Ford can be seen simultaneously twirling up to three — sometimes flaming — batons.

The first time Ford tried twirling was at the age of 11 after watching one of her friends perform. She attended a lesson at Gwen’s School of Champions in Saxonburg, Pennsylvania and was immediately hooked.

At the start of high school, Ford made use of her twirling skills by joining her school’s marching band. It was not until the summer before her sophomore year that she was introduced to fire batons at a camp run by Twirling Unlimited in Clarion, Pennsylvania. Now, it’s a regular part of her routine.

Small injuries are not uncommon when working with the lit batons, Ford said. After performances, her arm hair is often singed off from the open flame. She has burnt herself on her leg a few times and once on her back. While Ford has not suffered any major twirling injuries, she said black eyes are a common occurrence.

“Sometimes you just don’t get to see where it’s coming, and then it gets you right in the face,” she said. “You just got to pick yourself up and move on.”

Injuries aside, Ford said she loves the sense of reward that the sport provides her with.

“I think there’s an excitement about making that catch or learning that new trick,” Ford said. “I like that there’s always room for improvement with it.”

Due to the coronavirus pandemic, the marching band is not allowed on the field and is restricted to the stands during football games. This has led Ford to taking the season off from performing. But despite her absence from Rhodes Stadium this season, Ford is continuing to practice every week.

Elon’s color guard coach Amber Smith works with Ford during practices and said that during a normal season, Ford’s twirling is definitely a crowd pleaser.

“I definitely think that’s one of people’s most favorite parts of the halftime show, when she can pull out [the] fire baton,” Smith said. “It represents ‘Fire of the Carolinas,’ which is the marching band, and obviously your mascot, phoenix. And it’s just very exciting to watch.”

When Ford joined Elon’s marching band in 2018, Kellie Kaufman ‘20 was also a twirler. As the only two specializing in baton, Ford said she was nervous that she would be an outcast from the rest of the band. But her concerns disappeared fast; Ford said the team embraced her as a new addition from the first day of band camp.

“Jill is one of those students that brings not only a passion for what she does, but also a desire to make the ensemble more of a family,” Poquette said.

Ford went through an audition process to earn her position as feature twirler at Elon, a role that allows her to receive a tiered scholarship from the university. Elon also pays for Ford’s game day outfit each year. Ford designs each of these costumes herself with the help of a seamstress from her hometown of Pittsburgh.

“I love being able to put the phoenix pride into a uniform and wear that,” Ford said.

In the coming years, Ford said that she would love to see more twirlers join the band.

“The more the merrier, and I’d be happy to share that spotlight,” Ford said.