Loy Farm’s solar panels are on university-owned land, but state law prevents the electricity from going directly to campus 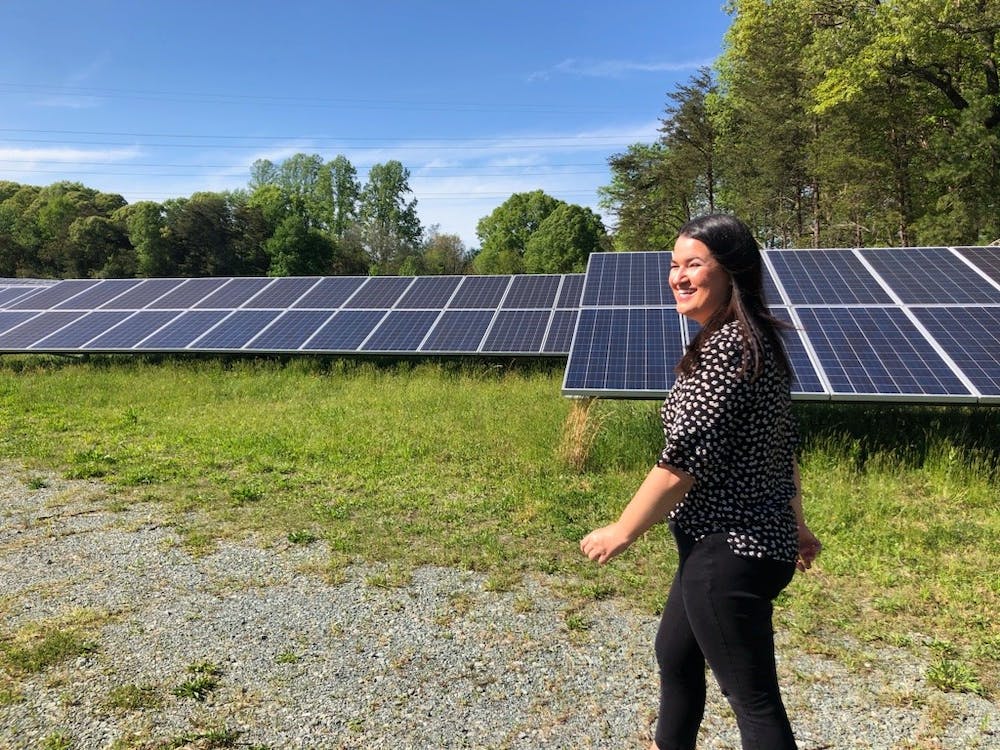 Photo by Margaret Faust | Elon News Network
According to Assistant Director of Sustainability Kelly Harer, there are two state laws that restrict the sale and transport of energy from Loy Farm to Elon’s campus.

The solar panels on Elon University’s solar farm can power up to 418 homes every year — about 10% of Elon’s annual electricity consumption.

The 15-acre solar farm was constructed in 2015 and consists of 9,900 individual solar cells. At its full potential, the farm is expected to generate 4,500 megawatt-hours of electricity annually, though the electricity produced over the past three years has been a little under 3,000 megawatt hours of energy annually, due in part to cloudy days.

The purpose of the farm is to use solar energy, a form of clean energy, to power Alamance County instead of using fossil fuels like coal, oil and natural gas, which are bad for the environment, according Kelly Harer, assistant director of sustainability.

Two state laws prevent the university from directly getting all the energy.

The first law, according to Harer, says that third-party energy suppliers can’t sell to other third parties. In other words, Loy Farm Solar, the company leasing the property, can’t sell their energy directly to Elon.

The second law, Harer said, madates that only utility companies can transmit power over or under public roads. Since the solar farm is on the other side of the train tracks, the panels cannot send the electricity directly to campus.

“Even if we did spend all the time and money, we wouldn’t be able to use the energy directly on campus,” Harer said.

Instead, Loy Farm Solar, which invested $6 million into the farm, sells its solar energy to Duke Energy, which then sells it to Elon University.

Harer said people often ask why Elon leased this land for solar energy if the university can’t use the energy itself, but she said Elon has a responsibility to help solve the climate crisis.

“We know there’s a climate crisis. It’s happening now. And we want to be part of the solution, even if we can’t claim credit for it right now,” Harer said.

A report by the Intergovernmental Panel on Climate Change found that if global temperatures continue to rise at the current rate, things will only get worse. More wildfires, heat waves, food shortages and droughts and less drinking water are only some of the consequences of burning fossil fuels instead of using clean energy.

“I think the climate crisis is getting more attention now than ever has been,” Harer said. “We have solutions out there. We just need to implement them.”

of Elon's annual electricity consumption can be powered by the solar panels on Elon University's solar farm.

Aside from providing clean energy for the county, Harer said the farm serves another purpose: education. Harer leads tours for primarily Elon 101 and Core 110 classes to learn about solar energy.

Elon sophomore Mallory Poff said she is proud to attend a university that has a solar farm. She grew up in Florida, the sunshine state, and has been fascinated by solar energy ever since she first learned about solar energy in second grade.

“Why not use [sunlight]? It’s there, it’s powering our earth now, plant wise and biological wise. Why can’t it power us and power our homes, businesses, cars, everything that we use?” Poff said.

At Elon, Poff began conducting research involving solar energy. Her goal is to make a self sustaining trailer to transport crops from Loy Farms to food pantries and farmers markets using solar energy rather than burning fossil fuels.

“We are born on this planet, this planet gives us what we need and it’s only right that we treat it back the way that it’s treated us,” Poff said.

Looking ahead, Harer said the university doesn’t have any plans to expand clean energy initiatives in the near future, but it is working to develop energy reduction programs.

These include things like limiting the hours classrooms are being heated or cooled and switching all outdoor lights to LED lightbulbs.

Harer said that Elon hopes to buy the solar panels from Loy Farm Solar in 15 years when its lease on the land expires. She said she hopes the rules that prevent the university from using solar energy directly will change by then as well, so Elon can use that energy to power the campus. This will help the university reach its goal of being carbon neutral by 2037.