Elon freshman tees off toward top of CAA rankings

Apple Ngamwong has had a successful start to golf season 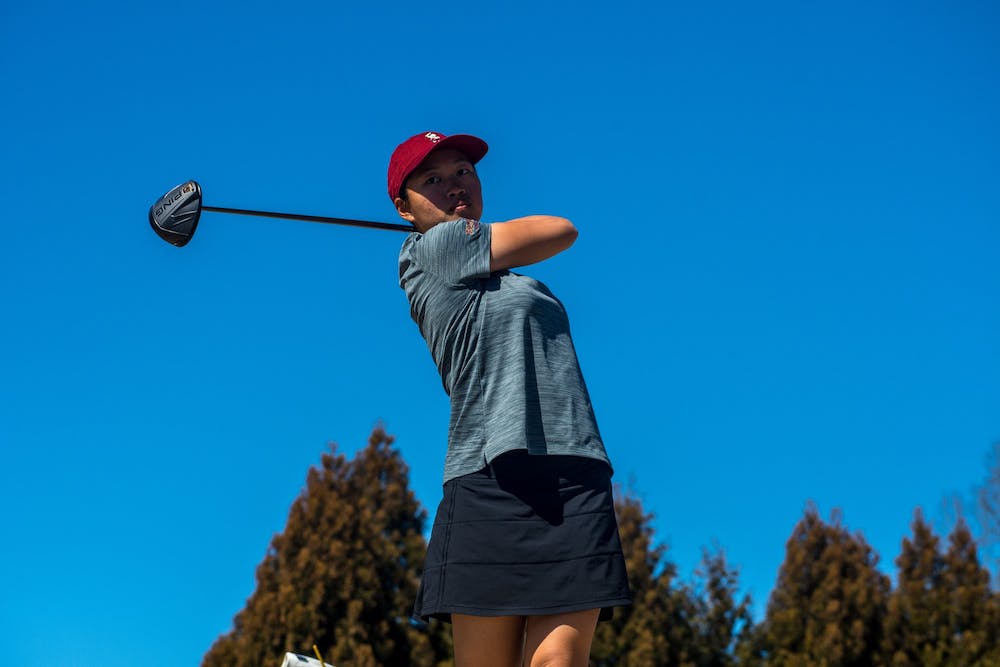 Freshman Apple Ngamwong practices her swing at the driving range near the South Campus Fields. Photo courtesy of Elon Athletics.

Apple Ngamwong has come a long way to play golf at Elon University — literally. The freshman, ranked third in the Colonial Athletic Association conference in women’s golf, is doing it all 9,000 miles away from home.

Ngamwong, a Bangkok, Thailand native, said despite her success, it’s still hard to be far away from her home country.

“It’s quite challenging,” Ngamwong said. “It’s my first time being away from home alone, like far and overseas,”

What keeps Ngamwong going, is her family, she said.

“I talk to my family every week,” Ngamwong said. “It’s not really ... lonely here. I keep in touch with them, so it’s not really tough.”

Ngamwong got into golf because of her grandparents, who would invite her to play with them as a child. She developed a deeper interest in the sport, eventually leading her to look into playing past the high school level.

She found out about Elon through her friend and current teammate Svarin “Lieu” Yuenyong, and she grew to like the environment the school would provide for her. Head coach Chris Dockrill said Yuenyong was instrumental to bringing Ngamwong over, and he’s very happy with both the golfers.

“Lieu came here as a freshman and said she had a friend who’s a very good golfer, a little younger than her and that, would I be interested in looking at her,” Dockrill said. “I said, ‘certainly’ ... Lieu has played good golf. We had to get that transition coming to the States her first year, but I think she’s a 4.0 student, and she’s done extremely well here.”

Most recently, Ngamwong placed third at the Low Country Intercollegiate tournament. On day one, she finished one under par with 143, shooting an even 72. She led Elon with three birdies and 13 putts for par for the tournament.

She was named the CAA Women’s Golfer of the Week for March 3 after being the top finisher for the conference in the 2021 Kiawah Classic. Dockrill said Ngamwong’s performance thus far has impressed him.

“She’s very focused on the golf course. She’s performed extremely well,” Dockrill said. “She actually has played better, believe or not, than the score she’s posted, so that’s very exciting for me as a coach.”

But Ngamwong believes she still can bring more out of herself. She said she’s hoping to take her performance to another level as she continues her golf career at Elon.

“So far I think it’s not that bad, but I think that I can be more improve and keep getting better and better,” Ngamwong said.

Ngamwong said she hopes to play professionally for the LPGA Tour after college. Dockrill agreed she was capable of reaching that level and said he expects more to come of her play.

“She’s the type of person that wants to learn, get better and expects a lot out of her game,” Dockrill said.

The Phoenix will be seen next at the Mimosa Hills Intercollegiate Tournament April 5 to 6.