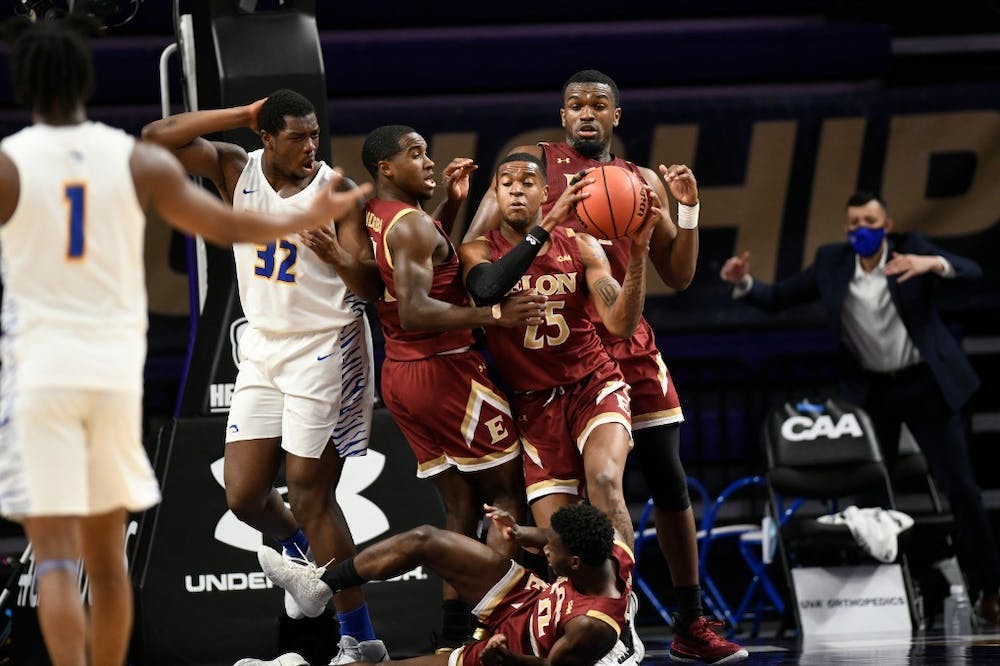 It was a back-and-forth affair early on as each team traded baskets, but Hofstra was able to head into the locker room with a 34-33 lead.

Elon stormed out of the gates to start the second half to take a 10-point lead. Hofstra trimmed the deficit to just one with 8:15 remaining, but Elon was able to pull away and put the game away.

In addition to a strong second half on the offensive end, in which the Phoenix scored 43 points, their defense was able to hold the Pride to just 24 points in the latter period. A day after knocking down 13 three-pointers, Elon made 12 more threes in tonight’s victory. They were also able to hold Hofstra to just 38% shooting in what was another strong defensive showing.

Senior forward Simon Wright had another strong performance for the Phoenix, with 10 points and six rebounds, prior to fouling out late in the game.

“We just had a group effort. I think our team — I’m looking at the stats — it was pretty balanced,” Ndugba said. “We just wanted to capitalize on our points going into the game, getting rebounds, sharing the ball, make open shots and have fun doing it.”

The eight-seeded Phoenix have won their seventh straight game and are now 10-8 for the season, as Hofstra, the four seed, ended the year at 13-10.

“We don’t want to go home, plain and simple. We just made it a real effort to lock in and continue in our game plan,” Ndugba said. “We just want to win, that’s it.”

Elon head coach Mike Schrage was proud of his team's performance since the start of the tournament, winning three games in as many days.

“I was most proud of our guys, their two responses when Hofstra made their runs [in the second half],” Schrage said. “We believe in all our guys, and that’s why we’re winning. We’re defending at a high level and guys have grown their offensive games to their comfortability on that end as well.”

Next up for the Phoenix is a finals clash with the winner of the Drexel/Northeastern game on Tuesday at 7 p.m. on CBS Sports Network.